Find out more
Home Are electric vehicles the future of transport?
Published on August 3rd, 2021

We take a look at how electric cars and vehicles work, how eco-friendly they are, and whether they’re the future of global transport. 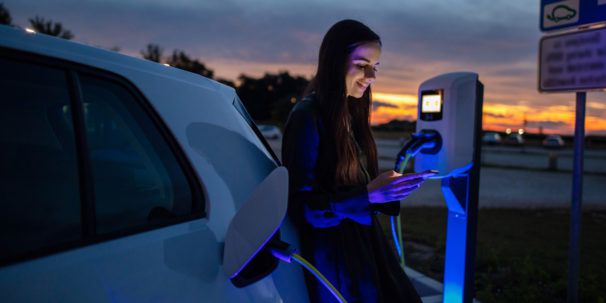 The way we travel is changing. With technological advances and a desperate need for greater sustainability, vehicles are becoming cleaner and smarter. But are electric vehicles the future of transport?

In this post, we’ll explore what electric vehicles are and how they work. We’ll also examine how sustainable they are, and whether they’re the solution for the eco-friendly transport of the future.

What are electric vehicles?

When we see this definition, it’s easy to think only of things like electric cars. However, electric vehicles also include other road transport (such as trucks, bikes, and buses), as well as electric planes and even boats.

You’ll often see a variety of types of electric vehicles fit under this term. This includes:

You can learn more about low carbon road transport with our free online course from experts at Cenex.

A brief history of electric vehicles

Electric cars and other vehicles feel very much concepts of the present and future. New technologies and legislation mean that manufacturers worldwide are turning their attention to fully or partially electric fleets. But in reality, the thought of using electricity to power transport dates back well over 100 years.

Throughout the 19th century, various experiments with electric vehicles took place. The first battery-powered electric motor was invented by Thomas Davenport in 1834, and over the following decades, various scientists and engineers tinkered with the design.

Electric carriages, cars, trams and even trains started to emerge towards the mid to late 1800s. However, the main issue with these vehicles was that the batteries used weren’t rechargeable, making them impractical for commercial use.

Electric cars soon became incredibly popular, particularly in the US. A large proportion of cars on the road in the early 1900s were electric. However, the large-scale production of Ford’s petrol cars and the increasingly affordable price of oil soon meant that electric vehicles couldn’t compete.

It wasn’t until the 1970s that interest in electric vehicle technology was renewed when vehicles such as the CitiCar were produced. In the mid-1990s, General Motors launched the EV1, and the Toyota Prius became the first mass-produced hybrid car.

Issues of power and range were still an issue until the late 2000s when Tesla launched its first Roadster. Nowadays, most major manufacturers have at least some electric or hybrid vehicles in their range, and battery manufacturing is better than ever.

So, electric vehicles have been around longer than you might think. But what is the current technology like? Aside from electric cars (we’ll cover them further down), there are several notable forms of electric transportation:

How do electric cars work?

Let’s take a closer look at how electric cars work, as well as at some key questions surrounding them. We’ll focus on fully electric cars as opposed to hybrids or plug-in hybrids.

We’ll keep this explanation simple here, covering some of the basics. Essentially, electric cars use an electric motor to power the vehicle’s wheels. These motors get their energy from batteries that are usually placed low down in the car. There is often also an additional battery that powers the electrics, lights, and other such elements.

The batteries in electric cars are rechargeable and can be charged from the electricity grid. This means that either a wall-mounted charger or fast charger (such as those at service stations) are required.

Of course, electric cars need a way to control how much power they draw from the batteries to power the motor. For this task, a control unit is used. Essentially, this uses the accelerator to determine how much power is needed, mimicking the feel of a combustion engine.

You can learn more about battery storage and technology with our free online course.

How long does it take to charge an electric car?

There are a few variables to take into account when it comes to electric car charging. The first is the type of battery used – most use a Lithium-ion (Li-ion) battery, although the capacity will often differ. Next is the type of charging used – a standard home 7kW charging point will be a lot slower than a rapid 150kW one.

As an example, the 2019 Tesla Model S has a 75kWh battery. To fully recharge it, estimates suggest 11 hours for a 7kW charger, but less than an hour for a 150kW charger.

How much does it cost to charge an electric car?

Again there are several factors to consider when it comes to the cost of charging an electric car. As well as the cost of the electricity in units (a kilowatt-hour or kWh), you need to take into account the size of the battery.

In the UK, the average cost is 10-14 pence per kWh. So again, taking the Tesla Model S as an example, its battery can hold 100kWh of charge. At 10p per kWh, it would cost £10 to fully charge the battery.

There are two ways to look at this question. The first is the electric car range – how far a car can travel on a full charge. As you might expect, this also varies depending on the vehicle and the type of battery it has. However, the average is around 200 miles, with the Tesla Model S reaching 345 miles and the Nissan Leaf reaching 135 miles.

The other consideration is the lifespan of EV batteries. The batteries that electric cars use become less efficient over time, meaning they eventually hold less charge. However, industry stats predict that most electric car batteries will last between 10 and 20 years before they need replacing.

As we explored in our posts of reducing your carbon footprint and greenhouse gases, transport accounts for around one-fifth of global CO2 emissions. What’s more, nearly 75% of these emissions come from road vehicles.

Evidently, there is a need for more eco-friendly transport and energy systems around the world. So how sustainable are electric vehicles? And what is their impact on the environment?

As we look at these questions, there are once again several considerations. As such, we’ll cover each one in more detail:

How sustainable are electric vehicles?

One of the biggest benefits of electric cars and other vehicles is that they produce zero emissions when they’re running. As there is no process of combustion, no fuel is burned, and no CO2 emissions are released into the atmosphere.

Of course, these vehicles still require electricity to charge the batteries. And the crucial question when it comes to sustainability and climate change is where this electricity comes from. Power that comes from wind turbines, solar panels, or other renewable energy sources is generally pretty clean. However, in many areas of the world, energy is produced by burning fossil fuels.

What is the environmental impact?

There are other issues beyond usage emissions. Making electric cars, particularly lithium-ion batteries, can be quite an energy-intensive process. Some studies suggest, for example, that over a third of lifetime electric car CO2 emissions come from energy used to make the car.

For electric cars to be more eco-friendly, manufacturing processes, as well as battery recycling and efficiency, must all improve. That being said, a 2018 report from the UK government concluded that battery electric vehicles (BEVs) ‘have substantially lower greenhouse gas emissions than conventional vehicles, even when taking into account the electricity source and the electricity used for battery production.’

Are electric vehicles the future of global transportation?

So, can electric vehicles be the eco-friendly transport solution for the future? Many countries appear to be making policies based on the fact that electric cars, at least, may be the future. What’s more, according to researchers at Wood Mckenzie, electric car sales are expected to reach 45 million per year by 2040, creating a total global EV stock of 323 million.

However, there are challenges with electric vehicles. Battery technology has come a long way in recent years, but for larger vehicles, in particular, the power output isn’t yet quite enough to make them viable.

Similarly, emissions related to the production of lithium-ion batteries need addressing, and recycling of these components also needs to improve.

Electric vehicles definitely have the potential to reduce emissions and help to address climate change. And, we will likely see them replace combustion engines in many instances. However, it needs an effort across many different areas to create a sustainable future. Finally, electric vehicles need to be powered by renewable energy sources to be truly effective.