Skip main navigation
Home Why is Python so popular?
Published on June 20th, 2022

Discover why Python is such a popular programming language in our guest post written by Jason Trott, Lecturer in Microcredentials at The Open University. 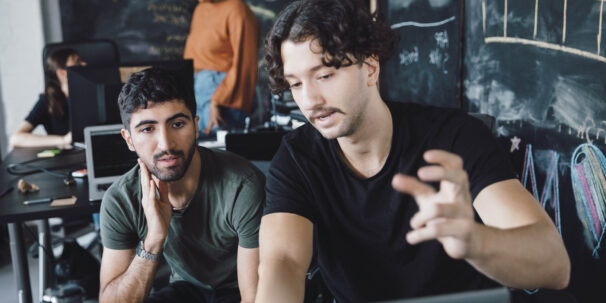 Have you been thinking about learning a programming language, but are not sure where to start? Python might be the perfect option. In the article below, Jason Trott, a Python enthusiast and Lecturer in Microcredentials at The Open University, will explain why it’s his number one choice.

We’re sure that you or anyone else reading this are genuinely wondering what on earth Python is? School children are using it; Fortune 500 companies too; data science experts seem to adore it, as does anyone fascinated by the internet of things (among many others).

So – why is it named after a typically venomous snake…? Well, it isn’t. Guido van Rossum, the creator of this programming language is a Monty Python fan, so go figure. Many technology enthusiasts and Monty Python fans seem to exist in the same world, at the same time.

Python (note the capital P) is a programming language, one of many. Some of you reading this may be aware of R, C#, C, C++, Java, JavaScript and so many others. If you take a moment to search the internet for programming languages, you will discover that Python often sits at #1 of the top #10.

There are many reasons why Python is popular, some simply due to its trendy nature. Some programming languages enjoy a period of zeitgeist (time spirit) and live to remain in the top ranks for decades (this is true for the Java and C-based programming languages, for example). However, it’s also due to Python’s versatility and relative ease of use when compared to other programming technologies. This is one of the reasons why it is often used in computer science education globally, as well as taught by The Open University in collaboration with the Python Institute and Cisco.

Once someone has learned to code in Python, at school, college or university or via remote learning, they have a set of skills that can be transferred to other popular programming languages or employed directly within the industry. This means that Python is a versatile programming language and those who learn it become adaptable coding professionals.

Industries that use Python

It’s a case of you name it, they probably use it. You will find Python code being used at NASA; within financial markets to aid analysis and machine learning based on sector-specific requirements; to help individuals with vision impairment use tactile interfaces; within Air Traffic Control, weather data and much more. Often, you’ll discover Python code in the simplest of places, such as smart televisions and toys, which now use this programming language.

A Raspberry Pi is a small credit-card-sized computer, created in the UK and available globally for at least ten years. It was designed for computer science education in schools, but many soon adopted this technology. It now appears on Amazon hits such as Mr Robot (used in an attack), has been sent into low orbit, and has been used for gaming, home computing and vending machines.

Python quickly became one of its core tools, offering coders a lightweight platform to deploy an extensive range of technologies. If you wanted to play robot wars, or be a cyber security professional, Python on a Raspberry Pi was considered to be the pre-installed go-to technology.

Python has a core set of resources, known as libraries or APIs (application program interfaces), designed for large-scale data analysis. This enables scientific experts, business and finance professionals or statisticians, among others, to use a coding tool to extract useful data from large and sometimes chaotic datasets.

Machine learning and artificial intelligence is often the domain of science fiction, usually being presented as some form of robotic, computational malevolent intelligence dedicated to the destruction of humanity.

If only it was this interesting.

Machine learning, in its most succinct form, is the creation of computational methods that learn and adapt based on data relating to a given task. For example, in Milton Keynes, the Starship delivery robots are continually learning and feeding data back to the cloud, for machine learning. However, as you can see from this BBC article, it is still a work in progress.

Using similar tools to those used within data science. Python is often employed to support machine learning. As it can be coded to process data in real time and interact with a range of diverse technologies, the chances are that many home automation devices are using cloud-based machine learning based on Python…

So, who uses Python programming?

As you have read, Python isn’t simply the domain of computer scientists. Often it’s being used by a range of industries and professional sectors, to help them create interesting scalable digital solutions to solve the problems they face.

When I am not teaching microcredentials at The Open University, I’m a deep sea technical scuba diver… yes, that’s me in the photo… and I go down to depths of 100 metres, which I can assure you is at the edge of darkness even in the best light conditions. To dive and resurface can take hours, as the decompression and gas mix is critical and getting it wrong will kill me in short order.

So, why do I share this? Even divers use Python – this code library on GitHub helps me and other Scuba enthusiasts plan our dives and the time it takes to ascend and descend the depths.

The reality is that anyone can use Python and, within reason, it can probably be used anywhere – from large-scale computational challenges to your eight-year-old learning to code for the first time.

Why, well simply put, Python is free – which helps. You can download and install this programming language on most systems with ease. It may take you a little time to learn, but you can update and maintain this coding platform at no cost forever. This is because it is open source and supported by a large community of experts. This is a commonplace practice in computing and is supported by large silicon valley corporations.

With it being so popular and supported by so many, for free, the number of resources developed for learning Python is mind-boggling. Science, mathematics, machine learning, date/time, gaming, graphics, assistive technologies, jokes, emojis, ASCII text generation and so much more.

As you can tell, I am a major Python enthusiast. It’s easy to access, easy to learn the basics and can take you into the profession, on a journey from novice to expert. You are not limited to working in computing – if you wish to be the first Python programmer to develop something unheard of, the opportunity is yours.

At The Open University, we worked with the Python Institute and Cisco NetAcad to create a microcredential that offers you a supported remote learning journey and degree credit to help you towards professional competence in this programming language.

Python is here to stay. It has been in existence since 1989, giving us 33+ years of development, and established itself within the digital technologies sector.

Over the previous ten to 15 years, as data science and machine learning have grown and we’ve seen the advent of the ‘internet of things’ and credit-card-sized computers such as the Raspberry Pi, Python has proven to be the most adaptable, robust coding environment for all.