When analysing genome data, it can be very informative to investigate the differences between closely related organisms.
© Wellcome Genome Campus Advanced Courses and Scientific Conferences

When analysing genome data, it can be very informative to investigate the differences between closely related organisms. Knowing these differences will help you to understand the biology of the organism you are studying.

What is the Artemis Comparison tool?

ACT is a computer programme that displays genomes and a comparison file in a user-friendly manner. It is essentially composed of three layers or windows. The top and bottom layers are mini Artemis windows (with their inherited functionality), showing the linear representations of the DNA sequences with their associated features such as genes.

If one of the sequences was reversed, and therefore present in the opposite orientation, there would be a blue hourglass shape linking the two sequences. Unique regions in either of the sequences, such as insertions or deletions, would show up as breaks (white spaces) between the solid red or blue blocks. 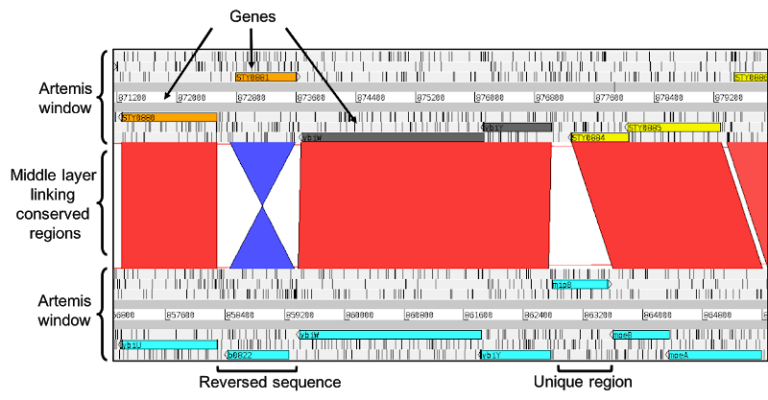 In order to use ACT to investigate your own sequences of interest you will have to generate your own pairwise comparison files. Data used to draw the red or blue blocks that link conserved regions is generated by running pairwise BLASTN or TBLASTX comparisons of the sequences.