Why do young men commit more crimes?
© Songman Kang, Hanyang University
Gender and age are arguably the two best predictors of crime. In 2014, males accounted for 73 percent of all arrestees in the U.S. and 80 percent of those arrested for violent crimes. Prison population statistics tells a similar story. Males accounted for 93 percent of the U.S. prisoners in 2014. Similarly, more than half of all homicides in 2014 were committed by 15-to-29-year olds, who only made up 20 percent of the population. Young males also have much higher rates of crime victimization than other demographic groups. Given these large disparities in crime commission, victimization, and imprisonment by gender and age, it is natural to ask: Why are young men much more likely to be involved in crime? The discrepancy may be largely driven by biological differences in natural strength and the tendency to use violence between men and women and between the young and the old. At the same time, differences in economic opportunities may also play some role in explaining high crime rates among young men.

Economist Jeffrey Grogger argues that high crime rates among young men can be partly explained by their adverse labor market opportunities. Jobs available for this demographic group tend to be low-paying ones, making it more likely for young males to be swayed by criminal opportunities that promise higher pecuniary payoffs. His analysis shows that real wage for young men declined by more than 20 percent during the 1970s and 1980s, during which arrest rates for men aged 16 to 24 rose by 20 percent.If low wage rates for male youths are an important determinant of their high crime rates, perhaps we can discourage their criminal participation by improving their labor market conditions. For example, higher minimum wage can make it less likely for a youth to choose crime as an alternative job. At the same time, standard economic intuition tells us that higher minimum wage can reduce the number of available jobs, and increased unemployment among male youths may actually encourage them to look for alternative “work” from the criminal sector.Economists Andrew Beauchamp and Stacey Chan tested this prediction by examining the change in minimum wage laws across the U.S. states between 1997 and 2010, and found that increasing minimum wage did lead to job losses and increased crimes committed by those in their teens and 20s. (This adverse effect of the minimum wage increase on crime was particularly strong among former gang members.) More employment opportunities for unskilled youths may be more effective in reducing youth crime than providing fewer jobs with higher pay.

The high offending rate of young males led researchers to wonder whether they could predict future crime rates based on the changing age structure. For example, in 1996, just few years after the rate of violent crimes reached its historic high, political scientist John J. DiIulio predicted that the U.S. would soon experience a further crime rise over the next decade. His prediction was based on the observation that:

1) The number of males aged 14-17 was expected to increase between 1995 and 2005.
2) Each generation of crime-prone boys is more dangerous than the ones before it.

View Course
As we know by now, this second wave of the crime epidemic did not take place. What went wrong with this prediction?

As DiIulio expected, the number of young males noticeably increased since the mid-1990s. (The number of 15-24 year-olds in the U.S. increased by 17 percent between 1995 and 2005.) At the same time, the number of middle-aged and elderly population also increased substantially, as baby-boomers began turning 50 in the 1990s.The disparity in arrests rates between different age groups, shown in Figure 1, suggests that an individual’s criminal risk peaks in early 20s, and then steadily declines over the years. As millions of baby boomers entered their 50s and 60s during the 1990s, this rapid population ageing could have neutralized adverse effects of rising youth population on the national crime trend. 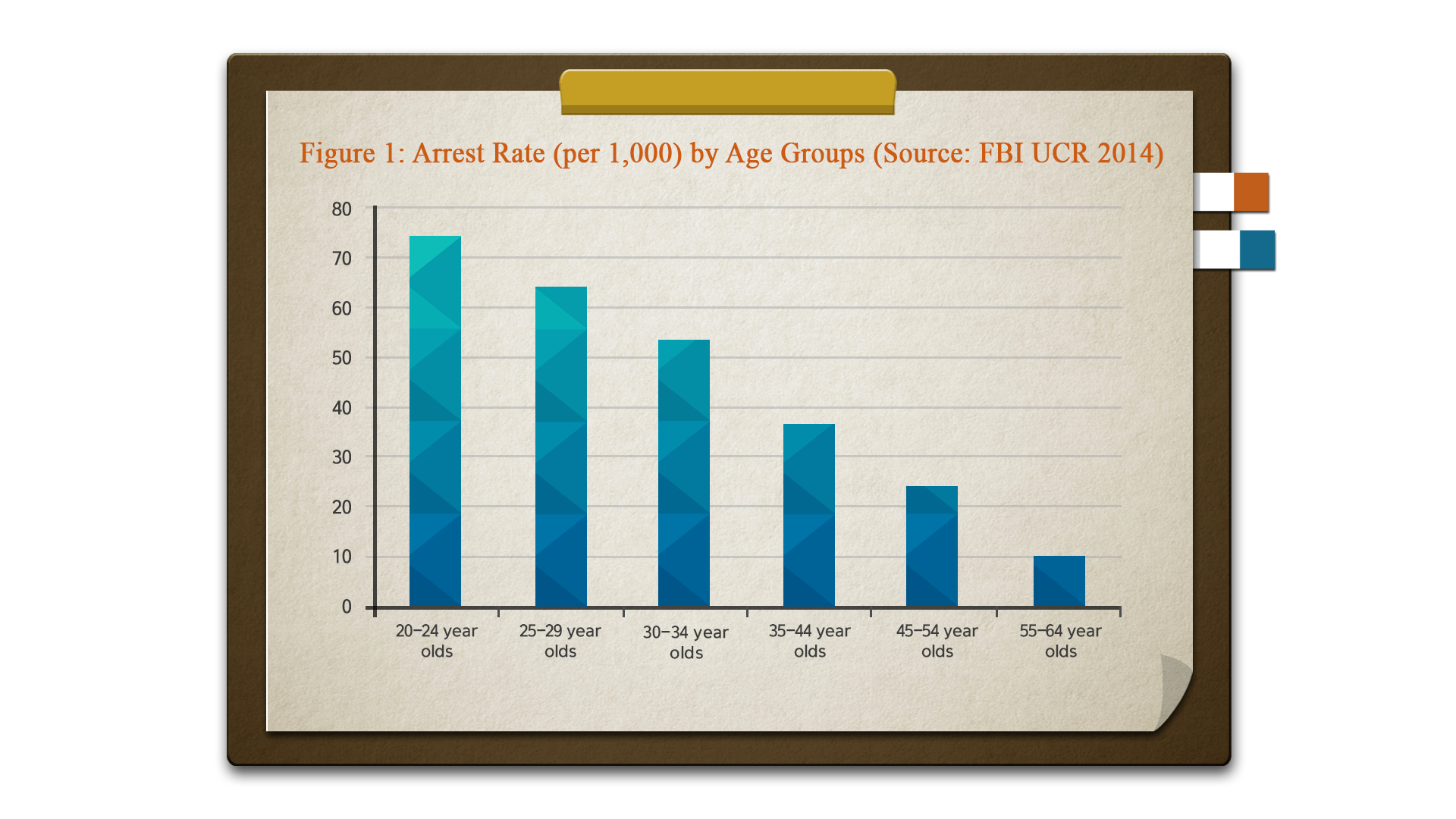 Are Young Boys Today Less Dangerous than Before?

Another potential explanation for the crime drop is that young boys in the 1990s and 2000s as a group were less dangerous than their predecessors. This may have been the case indeed. Criminologists Philip Cook and John Laub document that homicide commission rates for 13-17 year old males and 18-24 year old males both declined substantially between 1993 and 1998. Contrary to the age-long belief that “today’s young generation is the worst ever”, the quality of youth population may in fact have improved over time.The most well-known (and perhaps the most controversial) theory that can explain the improved quality of youth population is that the legalization of abortion in early 1970s reduced the number of unwanted children (who are at greater risk for crime) and thus reduced crime roughly two decades later when the unwanted children would have reached their crime-peak age (Donohue and Levitt 2001).Although simple and intuitive, this “abortion theory” has generated a heated debate among economists, regarding the technical details of the original analysis and whether the theory successfully explains the observed pattern of the crime drop.We will come back to this issue in Week 5.* Question
Many countries are currently experiencing a rapid population ageing.
Do you think this will be a relevant factor in predicting their future crime rates?

Hi there! We hope you're enjoying our article: Why do young men commit more crimes?
This article is part of our course: Economics of Crime