The importance of MSK as a Public Health issue

Musculoskeletal (MSK) conditions such as arthritis and back pain affected an estimated 18.8 million people across the UK in 2017.

There has been a steady increase in the average life expectancy in recent decades, and there are now half a million people in their 90s in the UK according to the Office for National Statistics (ONS), more than two and a half times the number in 1985.

The current level of morbidity is unsustainable

By 2041 in the UK, the ONS estimates that there will be 3.2 million people aged 85 years and older. Whilst people are living longer, the majority are not living in good health.

The current level of morbidity is unsustainable and is a major challenge for the health and social care system. There are financial, workforce and economic impacts.

Some MSK conditions can cause long term disability and prevent the individual from working, this can lead to increasing pain, disability, loss of work and mental stress. 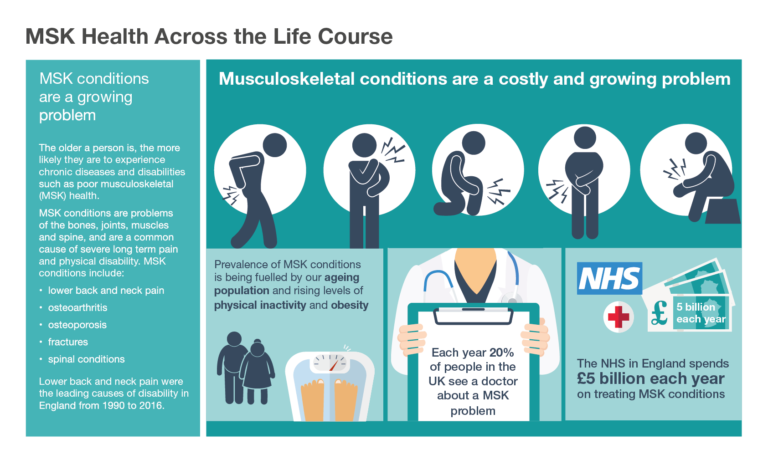 The opportunities available to each of us as we age will be dependent on one important characteristic – our health.

As life expectancy rises, we must promote the concept of productive healthy ageing, which involves:

The effects of poor MSK health

Poor MSK health affects people of all ages. The ageing population, rising obesity rates and reduced physical activity will increase the prevalence of poor MSK health in the years to come.

For many years there has been a perception that MSK conditions are unavoidable and part of the ageing process, leading to a focus on treatments to alleviate the pain and discomfort. While life expectancy has risen, many people are living longer in poorer health – particularly those in more deprived parts of the country.

The older a person is, the more likely they are to experience chronic diseases and disabilities such as poor musculoskeletal health.

MSK problems are characterised by pain, stiffness, and limitation of movement, which can affect the person’s ability to live independently. For some people, this can cause significant stress, often leading to a disruption in normal family life and preventing them from working.

Without professional support, there is the additional risk of developing psychological distress and economic hardship. According to Versus Arthritis, only 59.4% of people of working age with an MSK condition are in work, and around 1 in 5 people with arthritis has depression.

Musculoskeletal (MSK) conditions such as arthritis and back pain affected an estimated 18.8 million people across the UK in 2017.

They accounted for more than 22% of the total burden of ill health (morbidity) in the UK, and low back and neck were the biggest cause of ill health overall across all ages. This is a major public health crisis that is predicted to grow with a major impact on the health and social care sector, the economy and the quality of life for an individual.

The impact on the individual

The framework was produced to identify the MSK health priorities for public health intervention in England. Many MSK conditions can be prevented or treated early to avoid long term disability.

The evidence to support prevention and early detection is growing. There are several interventions, tools and resources to support people of all ages to take the appropriate measures to address the leading risk factors such as excessive weight, physical inactivity.