How does the written record complement other material culture?
View transcript
5.1
DRAGANA MLADENOVIC: Epigraphy is the study of textual evidence from the past, and textual evidence can come in any sort of a form. When they think of epigraphy, people think of nice stone monuments with inscriptions on them. And yes, a lot of epigraphy deals primarily with this. Those stone monuments can be both public inscriptions, telling us about imperial munificence or a historical event, but they can also be private monuments, so either funerary monuments or votive offering descriptions that one can find. But inscriptions are not only in stone. We find inscriptions in metal. So, for example, most of official documents in the Roman period were produced on metal. These do not survive.
55.6
Metal is so easily recyclable that we have very, very few examples of these. Maybe a less glamorous part of epigraphy, but the one that one finds on a site like this particularly useful, are the so-called instrumentum domesticum. Instrumentum domesticum is a category within epigraphy that incorporates not inscriptions that are set up for public, but various markings or stamps that were done on all sorts of media, usually in the process of their production to contain practical information. So for example, if you have a nice terra sigillata bowl, the producer would have stamped it from the bottom with an abbreviation of the workshop.
99.6
Or brick stamps– which I know you’ve already seen– they would have had nice stamps on them, again made by the producer. We also have tituli picti. These are inscribed labels that are done on the necks of the amphora. They tell us where the content comes from, who ships it, things like this. So they really help us see the people and the movement of goods much, much better than a grand marble inscription would.

Well, Dragana seems to be using a lot of technical terms in this one! Here is a bit of help to assist you with some of the more technical phrases. As mentioned earlier, epigraphy is a study of written monuments, and in the Roman period they come in a variety of types, sizes, materials or languages. Latin was the language of the state, but Greek was more common in the east and there was no rule against using your native script on private monuments, so other languages have been attested in different parts of the Roman world.Many monuments were made of stone, both public and private. Public carry official dedications, while private ones give us a glimpse into the lives of men and women who lived many centuries ago. Tomb stones and votive (religious) dedications are particularly illustrative and evocative. 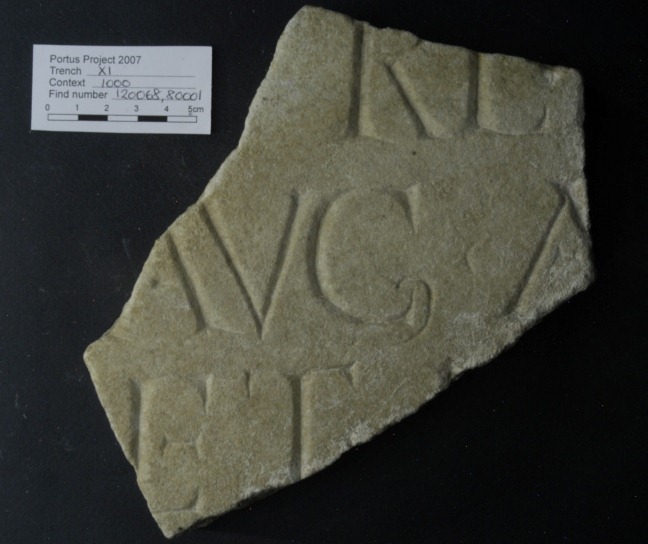 Fragment of inscription found in our excavations at Portus. This is part of a sequence captured for RTI processing. You will learn about this in week 5 – Graeme Earl © University of SouthamptonAs I discuss in the extra video below, identifying inscriptions gathered by antiquarians and associating them with Portus (let alone specific parts of the site) is very difficult. Lots more work needs to be done, and could tell us much more about the demographics of the site.Metal inscriptions can also be both private or public, but are mostly official documents be it a military diploma confirming a grant of citizenship to a soldier upon discharge, or the official decree of the Senate by which an emperor was proclaimed. Some private writing though can be found on metal too, such as curses.

View Course
Instrumentum domesticum (Latin meaning a domestic instrument) is a branch of epigraphy dealing with inscriptions found on portable everyday objects. There inscriptions usually serve a practical purpose, e.g. to indicate the manufacturer of an object. Terra Sigillata (Latin meaning stamped pottery), also known as Samian ware, is a type of Roman mass-produced fine table ware that often has exactly this kind of markings – for example this plate. Brick stamps provide the same kind of information. I mention them here, but actually you won’t learn about these until next week.When such markings are painted rather than incised or stamped we call them tituli picti (Latin for painted labels). These are commonly found on amphorae, giving details of their content (quantity, origin, producers) and shipping arrangements, like on this Spanish olive oil amphora on our Amphora Project hosted by the Archaeology Data Service.This kind of material also relates to the discussion we had earlier about trade, and how one can identify connections between Portus and the rest of the Mediterranean.The next two steps will allow you to learn a bit more about two further methods of analysis. Afterwards Simon will introduce one fascinating type of written material – consular Brick Stamps.

Hi there! We hope you're enjoying our article: The written record
This article is part of our course: Archaeology of Portus: Exploring the Lost Harbour of Ancient Rome