This content is taken from the University of Oslo & Scholars at Risk's online course, Dangerous Questions: Why Academic Freedom Matters. Join the course to learn more.
View course
1.16 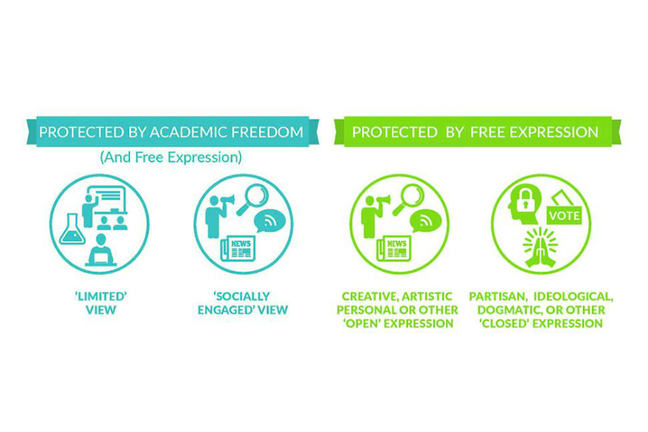 Line drawing: Other questions for discussion

In the last few steps we discussed the challenges in precisely defining whether particular opinion, expression or conduct of an academic is, or is not, protected by academic freedom.

And you have seen from the exercises how difficult it can be to draw lines between different kinds of expression and conduct. If you find this confusing, that’s OK. It is confusing. There are a lot of questions to consider. Here are a few more. Share your thoughts in the comments, or add questions of your own.

It is sometimes difficult to decide the difference between opinion, expression or conduct that falls within the “socially engaged” view of academic freedom (column B in the summary chart provided in the downloads section below) or “creative, artistic, personal, or other ‘open’ expression” (column C in the chart). The chart uses identical icons for these two categories to indicate that the same opinion, expression or conduct may be located in either column. This course suggests that it depends on how the action is taken. That is, whether it was done in a professional capacity and according to the standards and practices of an academic discipline, as determined by experts in that field. Is that a good standard? If not, what other test would you use to decide?

Question: Does location matter? On-campus vs. off-campus expression or conduct

However, since both views agree on protection for actions on campus, a presumption in favor of academic freedom protection might be claimed for opinion, expression or conduct taking place within the higher education space—including not only classrooms and laboratories but also offices, corridors, and courtyards of campus facilities and in textbooks, teaching materials, journals and publications, websites, and university emails. What do you think? Is everything inside the university campus protected by academic freedom? Is anything outside that space protected by academic freedom?

Question: Is there a difference between protest and violence? Disruption and destruction?

Some may question what constitutes “violent or coercive” conduct (column E in the chart) and, in particular, how to assess protests or other organized actions, on or off campus, that involve various forms of interruptions or disruptions. Is there a difference, for example, between protesters blocking access to a lecture hall for a few minutes, and protesters blocking access to campus for an hour? For a day? For weeks? Is time the only factor? What other factors matter? Number of participants? Location? Any harms resulting? What do you think?

Question: Who gets to exercise academic freedom?