0:12Skip to 0 minutes and 12 seconds Hello, I’m Tim Cook. I’m a consultant anaesthetist in Bath, and I’m advisor on the airway to the Royal College of Anaesthetists. Today I’m here to talk to you about capnography during cardiac arrest, and the message, no trace means wrong place. That is, if the capnogram is flat, we should assume that tracheal tube is in the wrong place. A capnograph trace is still seen in cardiac arrest. No trace equals wrong place. During this presentation I’m going to refer to several cases, and these obviously relate to identifiable patients, to their families, clinicians involved in their care, and the hospitals they work in. Please treat this information with respect. I’m going to take you back 10 years to the publication of NAP4.

1:06Skip to 1 minute and 6 seconds In NAP4 I anticipated that because of capnography we would not see any cases of esophageal intubation. However, to my disappointment we saw a total of nine cases– that’s 1 in 20 of the cases reported in NAP4– related to prolonged or undetected esophageal intubation. There were three cases in anaesthesia leading to two deaths, four cases in intensive care leading to two or maybe three deaths, and two in the emergency department, both of which were fatal. This means there were six or maybe seven deaths as a result of undetected esophageal intubation. This case, which comes from NAP4, illustrates how complex these cases can be. In this case the patient had asthma and an allergy to latex.

2:00Skip to 2 minutes and 0 seconds They underwent routine general anaesthesia, and airway management was difficult from the start. After intubation, the patient became hypoxic and developed cardiac arrest. Anaphylaxis was suspected. A flat capnogram at that trace at that time was incorrectly attributed to the loss of cardiac output, and the difficult ventilation was attributed to bronchospasm or allergy. No action was taken to actively exclude esophageal intubation. Fortunately resuscitation including adrenaline led to a return of spontaneous circulation. At this time, with the capnograph remaining flat, efforts were made to detect whether there was actual esophageal intubation. The tube was found in the oesophagus, and this was corrected.

2:51Skip to 2 minutes and 51 seconds The patient’s oxygen saturation had remained below 70% for at least 20 minutes, and at the time the report was published the patient remained in a persistent vegetative state. Had the capnogram been interpreted correctly from the outset, this outcome may have been avoided. 10 years on there have been two recent deaths both relating to unrecognised esophageal intubation. I’m not going to talk about these cases in any detail, but I would encourage viewers to look at the publicly available information which is on the coroner’s website. So if you go to www.judiciary.uk and search for the two patients’ names– that’s Mr. Peter Saint or Mrs. Sharon Grierson– then the coroner’s reports and their recommendations are available that.

3:45Skip to 3 minutes and 45 seconds Both patients died as a result of unrecognised prolonged esophageal intubation. Capnography was in place, but the relevance of a flat capnogram trace was not appreciated. This capnogram trace comes from a cardiac arrest without CPR. If the tracheal tube is in the right place, an attenuated capnogram trace will still be visible for a long period of time– maybe several hours after cardiac arrest. If CPR is ongoing, the attenuated trace will be slightly more prominent, but will remain attenuated until return of circulation. If the capnogram is completely flat and there is no trace, no waveform, then ventilation is not taking place. It must be assumed that the tracheal tube is in the wrong place.

4:39Skip to 4 minutes and 39 seconds That is that it is in the oesophagus, so a flat trace implies esophageal intubation. Actions must be taken. First, assume that esophageal intubation has taken place until proven otherwise. The tracheal tube should normally be removed, and ventilation of the lungs should occur by other means. Of course, there are other reasons why the capnogram may be flat, and that includes a completely blocked tracheal tube, and a blocked or disconnected circuit or capnogram. But these are less common causes and, more importantly, esophageal intubation should be assumed until proven otherwise to protect patients. This issue is so important that in January 2018 this became a never event.

5:33Skip to 5 minutes and 33 seconds So undetected esophageal intubation, there was a never event from January 2018, and it states specifically that it is a never event when esophageal intubation is either not detected because capnography is not used, or the capnogram is used but the output is misinterpreted. This has been briefly withdrawn while further discussions on the exact wording are concluded, but by the time this presentation is released I believe it will again be a never event. The actions for Airway Leads are to inform all those who are involved in airway management of the importance of this message. That is all Anaesthetists, all intensivists, all emergency physicians, paediatricians who intubate, those attending cardiac arrests, pre-hospital teams, and advanced paramedic practitioners.

6:26Skip to 6 minutes and 26 seconds This information is also relevant to the whole surgical team. Please share this information. The information will be available on the college website and on the Difficult Airway Society website. We suggest that the information is sent to all individuals by email, and that this is presented at the next departmental meeting.

6:47Skip to 6 minutes and 47 seconds So, to summarise, during CPR the capnogram is an attenuated trace. If the capnogram is a flat trace during cardiac arrest, it should be assumed esophageal intubation has taken place until proven otherwise. Act now. Capnography. No trace means wrong place. Spread the message. Thank you.

The Royal College of Anaesthetists (RCoA) and the Difficult Airway Society (DAS) have created this video “Capnography: No Trace = Wrong Place”, presented by Professor Tim Cook. It has a very important message: during cardiac arrest a completely flat capnograh trace means oesophogeal intubation until proven otherwise.

In the previous step, we learnt that failure to interpret a capnogram correctly, led to oesophageal intubations going unrecognised and contributed to severe patient harm and death. Following NAP4, the President of the RCoA wrote to all Trust CEOs reinforcing several recommendations, including that all patients ventilated in theatre, the ICU or ED should be monitored with continuous capnography.

Capnography is the visual display, or waveform, of the partial pressure or concentration of carbon dioxide (CO2) in inspired and expired gases, plotted against time, and it shows characteristic patterns during the respiratory cycle. The waveform provides important information, including confirmation that the airway is ‘open’ and that artificial airway devices such as tracheal tubes, supraglottic airway devices or tracheostomies are in the correct place [1]. For a simple visual guide we recommend you review and share this ‘Hats and Caps’ infographic.

The use and correct interpretation of capnography improves patient safety in all areas where artificial airways are used, including anaesthetic rooms and theatres, recovery areas, the emergency department, critical care units and during transfers.

A flat capnograph trace means there is no ventilation of the lungs: the tube is either not in the trachea or the airway is completely obstructed.

During cardiac arrest, ventilation with or without chest compressions leads to an attenuated but visible expired CO2 trace, as demonstrated in this video and shown in the illustration below. 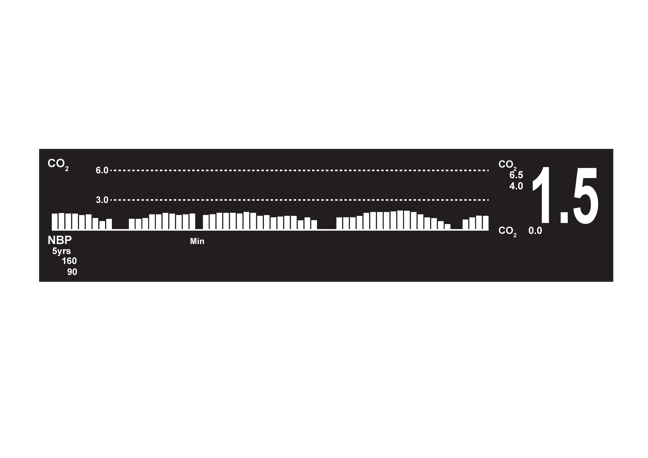 The Lancet Commission on Global Surgery emphasised the importance of access to safe anaesthesia care. Capnography is an essential monitor for safe anaesthesia but is not yet universally available. The Global Capnography Project (GCAP), which started in 2016, aims to introduce capnography to low-income countries. This international project aims to make global capnography become the standard of care, like pulse oximetry, to improve patient safety worldwide [2]. In Week 5 of this course we’ll learn about airway management in Low and Middle Income Countries, and look at airway management from a Global Perspective.

After watching the video, please join the discussion and share your experience of using capnography in your workplace. Is waveform capnography available wherever you need it? What other useful information can capnography provide?

In the “Downloads” and “See Also” section below you will find a number of resources on capnography that may help you answer this question.

In the first part of this course we have explored some of the key concepts of safe airway management. But is there more to airway safety? In the next activity, we will explore the role of Human Factors and Ergonomics, beginning with the case of Mrs Elaine Bromiley, who tragically died as a result of failed airway management.

© UCL, video shared with permission from the Royal College of Anaesthetists and the Difficult Airway Society.