This content is taken from the University of Reading's online course, Archaeology: from Dig to Lab and Beyond . Join the course to learn more.
View course
1.18

0:08Skip to 0 minutes and 8 seconds Marden Henge is a very, very big monument. And within the monument itself, there are a couple of other monuments, contemporary. One of them was a large mound, known as the Hatfield Barrow. But just to the south of the henge is a circular monument that seems to be another henge. So it’s a henge within a henge. It’s kind of like a Russian doll of henges. And we excavated on the bank of this inner henge and we found a building. This is a Neolithic building. This is, broadly speaking, contemporary with the henge itself, an extraordinarily rare survivor from a period where we get very little evidence. We make a lot of very little in prehistory in Britain.

0:55Skip to 0 minutes and 55 seconds And all of a sudden, we had the entire floor plan for a building. There’s a beautifully made floor. Its laid chalk, compacted. Probably it’s been processed in some way– it’s probably been puddled. But it’d been very carefully laid down. The central area was sunken into the ground, providing a step around it. And then right within that sunken area was a hearth, very, very large hearth. And we think the building was used as a sweat lodge. So we don’t think it was a typical domestic building. We see it somewhat more akin to a ceremonial building. We found a huge charcoal spread all emanating from a fire outside the building, and there were lots of bits of stone within that.

1:42Skip to 1 minute and 42 seconds And that’s what made me think, well, maybe they’re heating up stone outside the building and they’re bringing it in. And then, of course, once you pour water over hot stones it immediately condenses and provides effectively a sauna. And we see this within the ethnographic record quite a lot. It’s nearly always used as part of a purification ritual. So it has very practical benefits. But more than that, it’s used ritually to purify the souls. And what little we know of henges is that they are ceremonial arenas. So we think that this is probably some kind of ceremonial or ritual rite going on within the henge. And I think people are probably purifying themselves, partaking in something.

2:29Skip to 2 minutes and 29 seconds So the building itself is an incredible rare survivor from 4,500 years ago, from our deep past.

The other wonderful discovery made on site – arguably the greatest of all – was the Marden floor surface. This unique and fragile discovery provided us with a chance to gain once-in-a-lifetime insights into life in the later Neolithic period – an opportunity we were not going to miss. One of the key questions arising from the excavation was what this building was used for – how did people use the space and what activities took place around the hearth?

One technique we used to try and answer this was subjecting the surface to a very fine-grained geochemical analysis. A thin occupation layer existed across the floor and PhD student Elsie Brookes sampled this every 10cm and took samples to study the layer in thin section. We hope this layer will provide geochemical patterns and residues providing high resolution information about the building’s use and activity areas.

In addition to the study of the archaeological deposits, we have also undertaken some experimental archaeology. Professor Martin Bell and students from the University constructed a half-scale version of the hearth and chalk surface, surrounded by a circular wattle wall back on the University campus. By doing different tasks, such as cooking and heating sarsen stone over the hearth, they were able to show what worked and what didn’t, as well as what traces different tasks left behind. By analysing the residues and chemical traces from the experimental site and comparing these to what was found on the actual site interesting patterns begin to emerge. 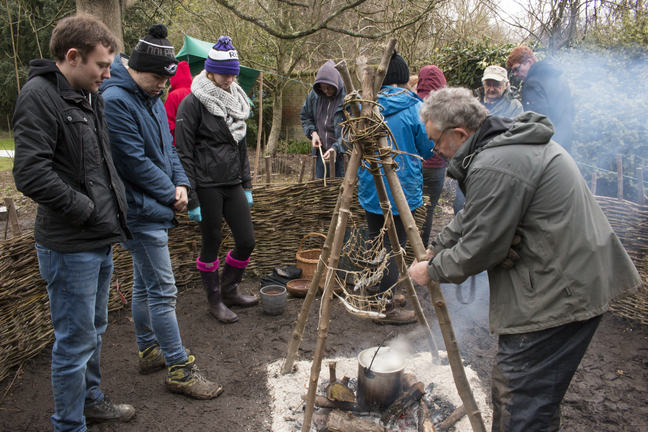 Slowly we are gathering a picture of the sorts of activities that are likely to have taken place within and around the building. Other experimental activities we did to help us understand the past better also included flint knapping, wood and bone working, pot making, spinning and weaving wool, flour and bread making using quern stones and the study of footprints.