This content is taken from the Durham University's online course, Archaeology and the Battle of Dunbar 1650: From the Scottish Battlefield to the New World. Join the course to learn more.
View course
2.6

Six of the excavated individuals had unusual wear on their teeth. Two of them, both young adults, had smooth crescent-shaped wear on the front teeth consistent with the routine smoking of long-stemmed clay pipes typical of the 17th century or later. 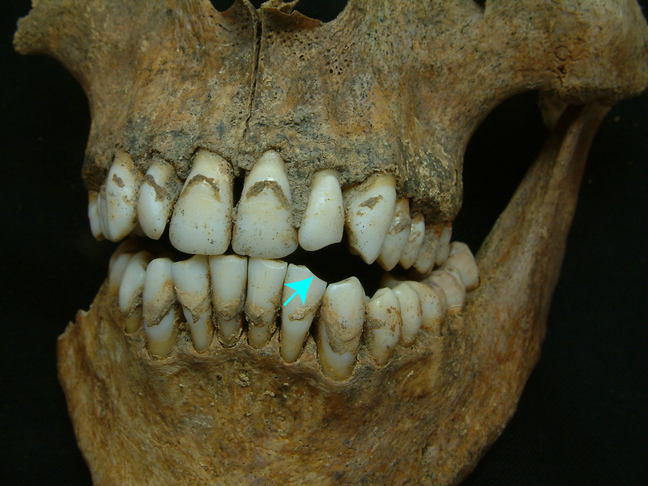 Smooth corresponding crescents of wear (indicated by the arrow) in the upper and lower teeth of Skeleton 21 attributed to pipe-smoking © Anwen Caffell, Durham University.

One man preferred to hold his clay pipe on the left side of his mouth, another on the right and a third young adult had concave wear on his lower teeth. All three must have begun smoking at a relatively young age, most likely during adolescence, given that shallow wear facets had already begun to form in their teeth at 17-25 years of age.

One 15½-16½ year old adolescent had smooth neat crescents on the tips of both his left canines. This suggests contact with a smooth cylindrical object, perhaps a clay pipe again although this would be an unusual position to hold it. 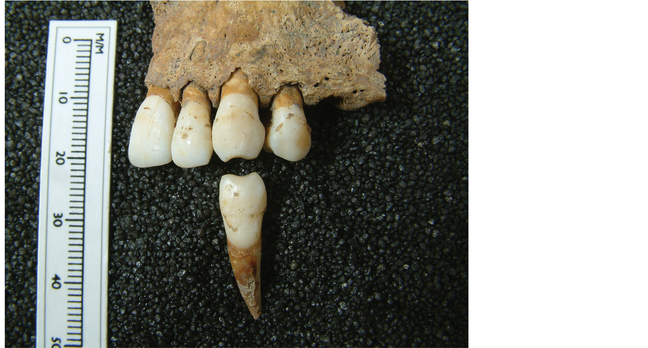 Small areas of concave wear were seen in the tips of the left canines of Skeleton 25 © Anwen Caffell, Durham University.

One young adult had a ‘V’ shaped notch in his upper right central incisor. His upper teeth also had heavy wear on the lingual (tongue) side, and were more worn than his lower teeth. Another young adult man had similar wear on the lingual (tongue) side of his upper left canine, and on the buccal (cheek) side of his lower left canine and first premolar. 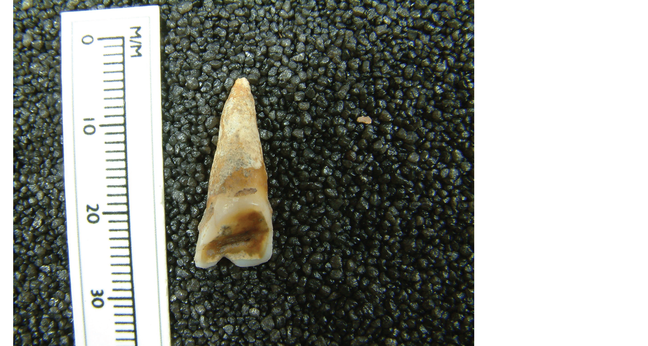 Atypical dental wear was also seen in another young adult who had a slight groove across the incisal surface of his lower left central incisor. All these men used their teeth as tools. They might have held an object like a pin, or else pulled thread or sinew through the mouth in a sawing action. Unusual wear like this is perhaps related to their occupations. Perhaps they were fishermen who cut lines or held hooks or else they worked in textile industries and snapped threads with their teeth?