This content is taken from the Durham University's online course, Archaeology and the Battle of Dunbar 1650: From the Scottish Battlefield to the New World. Join the course to learn more.
View course
2.12

Drawing the scientific evidence together

Our researchers at Durham University worked with specialists at the University of York, University of Bradford and Liverpool John Moores University. This information gave us a picture, or osteobiography, of each individual. 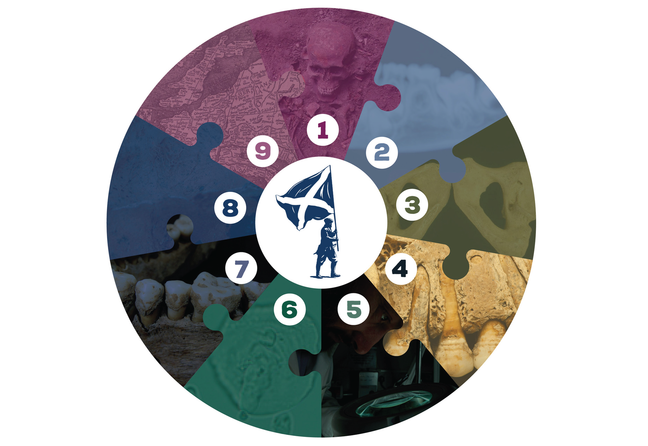 1. How many individuals were there? Between 17 and 29 skeletons were identified. Most skeletons were very incomplete, so the lower estimate is based on the most frequently preserved part of the skeleton.

2. How old were they when they died? A high proportion of teenagers and young adults were present. There were few older adults and no children under 12 years old. Of the 17 more complete skeletons: five individuals were aged between 13-16 years old; seven 17-25 years old; one 36-45 years old, and one over 46 years old.

3. Male or female? Different techniques, including inspection of the bones and DNA analysis were used on the more complete skeletons and separated (disarticulated) bones. All of the remains were identified as male or could not be sexed. On the basis of their DNA we now think two of the men may have been brothers. There was no evidence of female remains.

4. What do we know about their childhoods? Isotope analysis of the roots of the teeth of 12 men showed that they had all been breastfed. In childhood, the oldest man was sufficiently nourished and in reasonable health. The others all had periods where diet changed or they suffered severe dietary or health stress. Two-thirds had hypoplasias (development defects) in their teeth caused by disease or malnutrition in early childhood. Some of these corresponded in time with the stress identified from isotope analysis.

5. Did they suffer from any nutritional deficiencies? The bones of some men showed evidence of having suffered rickets (vitamin D deficiency) as babies or children. The amino-acid composition of the protein in the bones of all but one man showed evidence of scurvy (vitamin C deficiency) at some point in their lives. Most had seen the condition improve in the latter years of their lives but only three no longer suffered from it.

6. What was their diet like? Microscopic particles and chemical traces from food trapped in dental calculus showed evidence for a range of foods. These included milk, wheat, oats, beans, brassicas (cabbage-like plants), and unidentifiable boiled vegetables. Lowland Scots at the time subsisted mainly on oats (as porridge oatcakes and oat bread), bread made from peas and beans, and kale broth; they ate little meat.

7. Did they suffer from any other diseases? Analysis of the DNA and proteins in dental calculus showed the presence of disease-causing organisms. Many of these occur in a healthy mouth, so we cannot tell if they were actively causing disease. The conditions included gum disease, inflammation of the heart, meningitis, gonorrhoea, upper and lower respiratory tract infections.

8. What else did microscopic analysis tell us? All 12 men examined had microscopic particles of charcoal and soot in their calculus. Some also had fibres (probably flax, hemp and wool), soil, mineral, grit or wood fragments. Soil and grit could be from household fires or tobacco smoking. Their presence might be linked to the presence of sinusitis in some men.

9. Where did they come from? Analysis of oxygen and strontium isotopes suggests that a Scottish origin was likely for five of the skeletons, and five others came from Scotland or northern England. Three other northern Europeans were also present. Comparing several teeth from each man showed that many of them had moved between different places in their childhood. All of the individuals showed little exposure to man-made or industrially processed lead, suggesting they were from rural areas. Further DNA analysis may be able to tell us more in the future.

Although everything now pointed firmly to a mid-17th century military context with a Scottish connection, one final possibility remained to be considered. Could these be the burials of Scottish soldiers billeted in Durham who died of the plague which broke out in the city between November 1644 and February 1645? The date could fit within the radiocarbon dates we have and with the isotope data too. The registers which record deaths by parish suggest a different story, however. Infection during this particular outbreak caused single deaths and did not spread through households. Mass graves of the kind discovered at Palace Green would not have been needed and bringing bodies to the heart of the city to be buried seems wholly unlikely.

Instead, the skeletal analysis coupled with the results of a dating programme and isotope evidence indicates, with a very high degree of probability, that the Palace Green Library skeletons must be the remains of prisoners who fought at the Battle of Dunbar in 1650. But how does this scientific evidence fit with historical accounts of the battle and its aftermath? Is the geographical diversity suggested by the isotope analysis compatible with what is known of Scottish army recruitment? And if some of the men were foreigners, what evidence is there that men from mainland Europe served in the Scots army? Above all, why is there no evidence of battle injuries on the skeletons?

Many questions remained to be answered.

Use the comments section below to discuss with other learners the strengths and weaknesses of the research and whether you would have reached the same conclusion.