This content is taken from the Durham University's online course, Archaeology and the Battle of Dunbar 1650: From the Scottish Battlefield to the New World. Join the course to learn more.
View course
4.12

Very few historic buildings of the 17th century survive across New England today in anything close to their original condition. The unsettled times would perhaps have discouraged the Scots from investing heavily in their homes, especially those who were living on the isolated fringes of the colony. Some settlements were burned during Native American raids.

Only fragmentary evidence survives. The home of Dunbar Scot Robert Mackclafflin in Wenham, Massachusetts (now part of Wenham Museum) was originally a single-room dwelling for Robert, his wife Joanna and four of their children after 1662. Inevitably, the building has been significantly altered by later occupants but it still gives a good impression of how a later 17th century house might have been.

No archaeological excavations have yet been undertaken at other sites, although several homesteads have been identified. The house of James Warren on the banks of the Salmon Falls River is today just a visible depression left by its cellar. Though it might have had two rooms, hall and parlour, it is more likely to have been a one-room pine-framed house with just a single heated space for eating, cooking and living in and a loft above. These houses are very similar to those which have been excavated in the Plymouth Colony and elsewhere in New England.

Unfortunately, documents are largely silent on the question of what these buildings may have looked like. James Moore’s will of 1659 mentions a ‘kitchen’, Patrick Fassett’s inventory of 1714 has a ‘chamber’ indicating a two-room structure, at least, but John Upton’s house was altogether grander; his will of 1699 names a ‘west lower room’, a cellar and ‘a garrett’. In later life, some former Dunbar men prospered more than others.

During the hostilities with Native Americans after 1675, the Scots sometimes took refuge in log houses known as ‘garrisons’. The Neales, the Junkins and the McIntires are all families of Dunbar men whose names are linked to structures of this type. The Neal Garrison House, which no longer exists, endured attacks in 1675 and 1690, while the Junkins garrison in the area named ‘Scotland’ survived only to be destroyed by fire in 1889. This site has been subjected to preliminary excavation.

Not far away, the McIntire Garrison overlooks the York River. Thought to be the oldest private house in the U.S., this building is a two-storey jettied structure with a cellar and a gabled roof. The extant windows (widened to take sashes), clapboards covering the house and the shingled east wall are all later additions but the walls concealed beneath are original. They are constructed of sawn logs, tightly dovetailed together at the corners above a stone base. This tradition of housing, it is interesting to note, in no way reflected the buildings which would have been remembered by the Scots in the country of their birth. 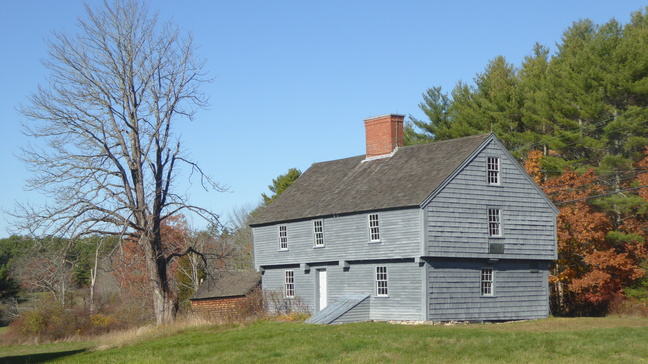 The McIntire Garrison House today, looking north. The kitchen, with cellar below, is at this end of the building; the living room at the far end beyond the door. There are two bedrooms above either side of the central stack. © Christopher Gerrard, Durham University.

There is a little in the way of casual finds. A spoon, thought to belong to Thomas Holmes, sometimes listed as a Dunbar survivor, can be seen in the collections of the South Berwick Historical Society. Holmes had a garrison near the Counting House on the Salmon Falls River where the spoon was recovered. There is also a child’s cradle from the Junkins family of possible 17th-century origins, although it is difficult to date precisely. A more complete picture can be gleaned from surviving wills and probate inventories. Standard fireplace furniture includes tongs, fire pans or shovels, spits and a range of cooking wares such as gridirons, iron and brass kettles of different sizes, skillets (pans with flared sides), frying pans, and iron pots suspended on pot hooks. The many kettles indicate that foodstuffs like maize were boiled, but fried and roast meats such as beef and pork were clearly popular too, just as they were in Britain at this time. Among the tablewares, there were pewter plates or ‘platters’, treen or ‘wooden ware’ and earthenwares. A range of English pottery with occasional Spanish, Portuguese, Dutch and German imports might be expected too. Some tables were well dressed; there was table linen for John Upton’s household and napkins at Alexander Bow’s. Robert Mackclafflin’s penchant for a pipe hints at some moments of relaxation; 18lbs of tobacco are recorded in his inventory when he died.

Domestic furnishings include feather, flock (with a wool or cloth mattress) and trundle beds (to be stored under a normal bed), often equipped with bolsters, bedsteads, pillows, rugs and blankets. The 17th century has been described as the ‘Age of the Bed’ and John Upton had no less than 20 pairs of sheets as well as a box iron (to be heated in the fire) and heater for the laundry. Although he was not as wealthy as Upton, Finlay Ross not only had children’s blankets and linens, but also a ‘smoothing iron’. Other recurring items are cupboards, trunks, a few chairs, chests, boxes and tables of various sizes. Among the comforting luxuries were chamber pots, warming pans and candlesticks; otherwise the only light in most houses would have come from the hearth. Personal effects such as bone combs, belt buckles and buttons are too low in value to be listed individually in probate records but they are exactly what might be expected were one of these dwellings to be excavated in the future.