This content is taken from the Durham University's online course, Archaeology and the Battle of Dunbar 1650: From the Scottish Battlefield to the New World. Join the course to learn more.
View course
2.10

We have already seen how the isotopic composition of the enamel in our teeth is influenced by diet and environment. By comparing this composition to known natural variations it is also possible to make some generalised statements about the origins of people.

In this case it is the isotopic compositions of strontium and oxygen captured in the enamel which are of particular interest. Strontium is released by weathering of rocks into the soil and then taken up by plants and subsequently by the animals that eat them and so to humans who eat those plants and animals. Variations in oxygen isotope ratios in humans, on the other hand, primarily reflect the composition of water in the diet. Like many foodstuffs, drinking water was almost always sourced locally in the past. Since the oxygen isotope composition of groundwater and precipitation (rainfall mainly) depends on climatic factors such as temperature and altitude, it becomes possible to correlate measurements on archaeological remains with modern geographical and geological maps. Although in both cases there are added complications – boiling and brewing, for example, will affect oxygen isotope ratios – the isotopes provide a kind of very approximate GPS signal on an individual’s origins. 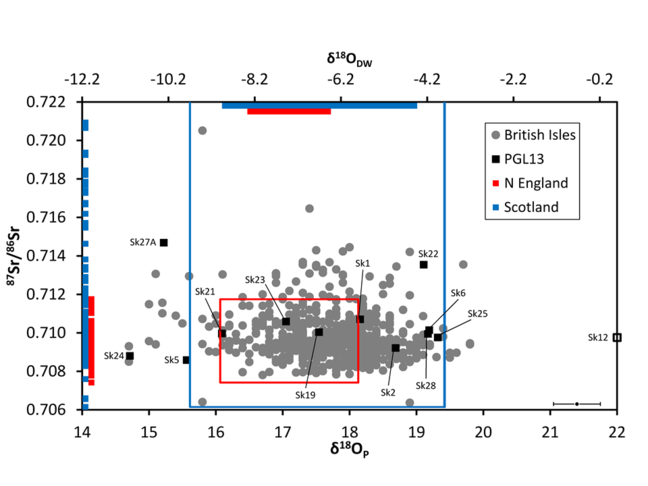 In terms of strontium isotopes, two of the excavated individuals (Sks 22 and 27A) fall outside the observed northern England range, but within the Scottish range. Only four (Sks 1, 19, 21 and 23) fall within the northern England oxygen range. Five fall within the higher oxygen values within the Scottish range, but the consumption of brewed or boiled liquids can raise these values. Strikingly, three individuals (Sks 5, 24 and 27A) have lower values than are compatible with drinking water from British sources. These individuals are likely to be migrants from outside the British Isles. Their oxygen values are consistent with more easterly, cooler or higher altitude environments such as Scandinavia, the Baltic or the Alps.

Further more detailed strontium and oxygen isotope analyses were then applied to first and third molars in addition to the second molar. This gave a time-series of analyses because the enamel of the first, second and third molars forms at ages of 0-3, 3½-7½ and 8½-13½ years respectively. Changes in the isotopic value between the teeth of an individual indicate movement during childhood, although lack of change does not rule it out.

The graph below shows the strontium isotope data for all the teeth analysed and it is evident that several of the men had moved during childhood, including one from overseas, Sk 27A. 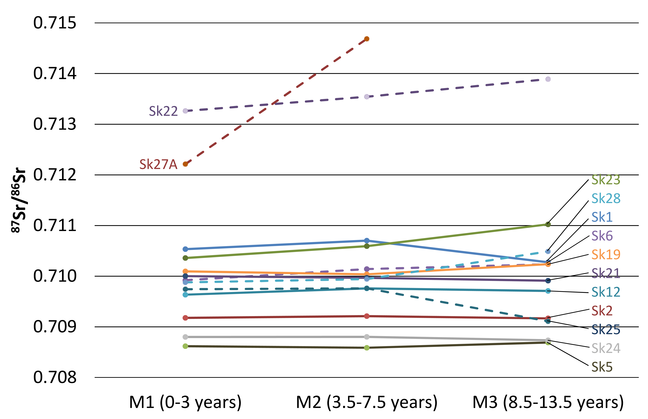 This level of detailed analysis is not often conducted on archaeological skeletons, so it is not yet known how typical this kind of biography might have been in past populations. Nevertheless, many of the men seem to have moved between areas of differing geology during their early lives.