This content is taken from the Durham University's online course, Archaeology and the Battle of Dunbar 1650: From the Scottish Battlefield to the New World. Join the course to learn more.
View course
4.11

New England was not an unexploited landscape before the colonists arrived. It was already occupied by Native Americans, among them the Narragansett in eastern Massachusetts and the Wabanaki (the ‘People of the Dawn Lands’) in Maine. They made full use of the natural habitat: its freshwater streams, marshes, coastline, and abundant marine life. Here they farmed, fished, trapped and traded.

Permanent occupation of tribal lands by Europeans dramatically affected their everyday existence. Settlers brought different ways of life with them: the practice of Christianity, European trade systems, and (as we have seen) alcoholic drinks of different kinds. Tribes were displaced, communities disrupted, local ecosystems destroyed, and the diseases brought by the settlers spread rapidly.

The years 1616-1619 are known as the ‘Great Dying’. The death rate was higher than 4 in every 5 people (80%). After the 1630s, there were recurring outbreaks of the viral infection smallpox, possibly unwittingly carried on gifts of blankets.

By the time the Dunbar prisoners arrived in New England, tensions were running high. Native Americans planned attacks and took prisoners, who were then sold to the French further to the north. As we have seen, some of James Warren’s immediate family were trafficked north to Montreal. 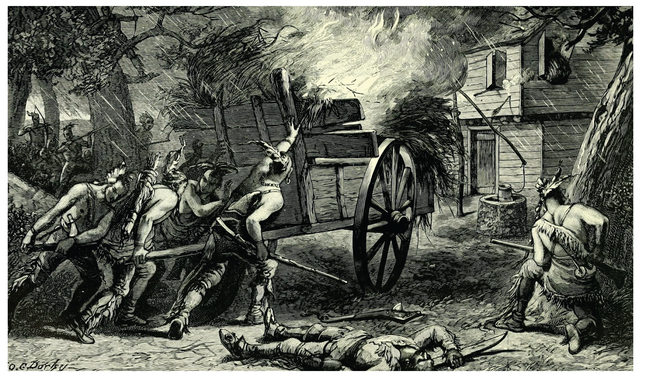 Engraving showing the assault on Ayres garrison, 4th August 1675, which lasted for three days and resulted in the abandonment of Brookfield (Massachusetts). Image taken from ‘Soldiers on King Philip’s War’ by George Madison Bodge, published in 1906.

After 1675 the lives of the Dunbar Scots were again marked by warfare, this time with Native Americans. Over nearly four decades of intermittent conflict and insecurity, at least two Dunbar men lost their lives, sawmills were burned, possessions lost, garrisons attacked and settlers captured. Muskets (long gun), ‘small guns’, powder and ammunition, as well as swords, a pike (pole weapon) and a cutlass (slashing sword) are all recorded in their houses.