This content is taken from the Durham University's online course, Archaeology and the Battle of Dunbar 1650: From the Scottish Battlefield to the New World. Join the course to learn more.
View course
5.3

Skeletons are complex and their excavation is always technically challenging. An adult skeleton normally has 206 bones but there are more in a new-born baby (450) and even more before birth (850). This is because the bones have yet to develop and join together. This means that the excavator must, first, be aware of the number of bones to expect from a skeleton and, second, how the number of those bones may vary according to the age of the person. 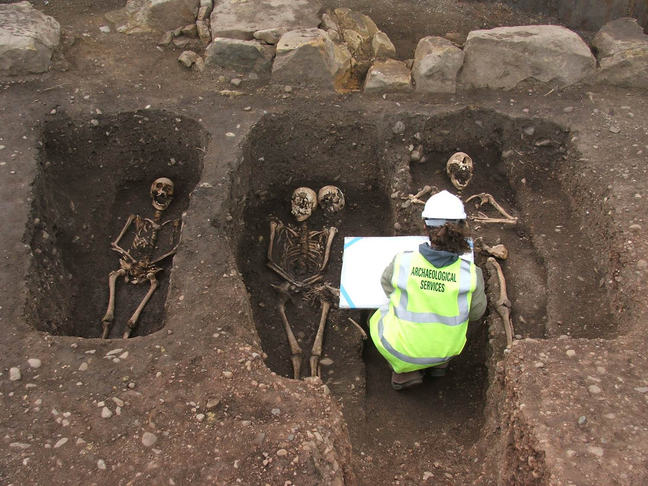 Once found, the skeleton is carefully uncovered, and the bones and teeth excavated are cleaned and recorded. Some bones are very small and delicate (e.g. ear, finger and toe bones). The recovery process can be affected by many different factors. Soil conditions and the degree of later disturbance will have an effect on the condition and completeness of the skeleton. In an old burial ground, where centuries of use will have led to later graves cutting through older unmarked burials, it may be hard to determine which bones belong to which person. In the past, gravediggers often collected bones that they disturbed. These collections, known as charnel, can be a confusing addition to a complex excavation and we saw in Week 1 how they may have caused problems of misidentification in the past in the case of the remains of the Scottish soldiers. The basic principles of excavation apply in all archaeological contexts, but dealing with human remains needs specific knowledge and skills that would not necessarily apply to archaeological finds such as pottery or plant remains.

Guidance on how to excavate human remains is available in several sources, including general archaeology books and specific documents related to sampling cemeteries and skeletons (and analysing them). The appearance of much of this guidance in the UK is due mainly to the work of APABE (Advisory Panel on the Archaeology of Burials in England) and BABAO (British Association for Biological Anthropology and Osteoarchaeology). This guidance includes how to excavate human remains respectfully. It is also recognized that respect for the dead is something that most religions practice. Thus, there may be special considerations to be applied to specific burial grounds, such as those with people buried there with known identities or ones known to have a specific religious affiliation (e.g. Jewish).

It is important that excavated remains are recorded as accurately as possible when they are uncovered. When bones are very decayed, it may not be possible to excavate them intact, and therefore a record of their preservation state is vital when analysis begins and the information from them is finally interpreted. A GPS (Global Positioning System), surveys, measured drawings, digital scans and photographs, as well as detailed written records, all provide important information essential for later analysis.

In the case of the Scottish soldiers’ remains, the excavating team applied their professional expertise and existing guidance in order to respectfully and carefully excavate the remains. However, it should also be noted that once they had been discovered while the groundworks for the new Palace Green café were being monitored, it was a legal requirement that the remains be excavated before construction could continue on the site.