This content is taken from the Trinity College Dublin's online course, The Book of Kells: Exploring an Irish Medieval Masterpiece. Join the course to learn more.
View course
1.7

Commissioning the Book of Kells

The context from which the Book of Kells emerged was, without doubt, a religious one, at a time during which there was a flourishing of learning and artistic creativity within the Irish Church. However, this does not fully explain the motivation that lay behind such a massive undertaking. As we will see in Week 2, the investment required to make a manuscript of the scale and intricacy of the Book of Kells, both in terms of materials and man-hours, would have been daunting.

“Could Henry Ford produce the Book of Kells? Certainly not. He would quarrel initially with the advisability of such a project and then prove it was impossible”.

So what was the motivation behind the project, and who was the brains behind it? Certainly since the eleventh century (and doubtless much before that) the manuscript held a strong association with St Colum Cille, a saint renowned for his talents as a scribe.

By this period it was not uncommon for high-status individuals in both sacred and secular worlds to commission lavish artworks for the Church. This served the dual role of demonstrating their piety, and creating a permanent reminder of their power and generosity in a sacred object displayed in the church. For example, when precious chalices and shrines were stolen from the altar at Clonmacnoise in 1129, they were described not by their appearance, but by the names of their donors. 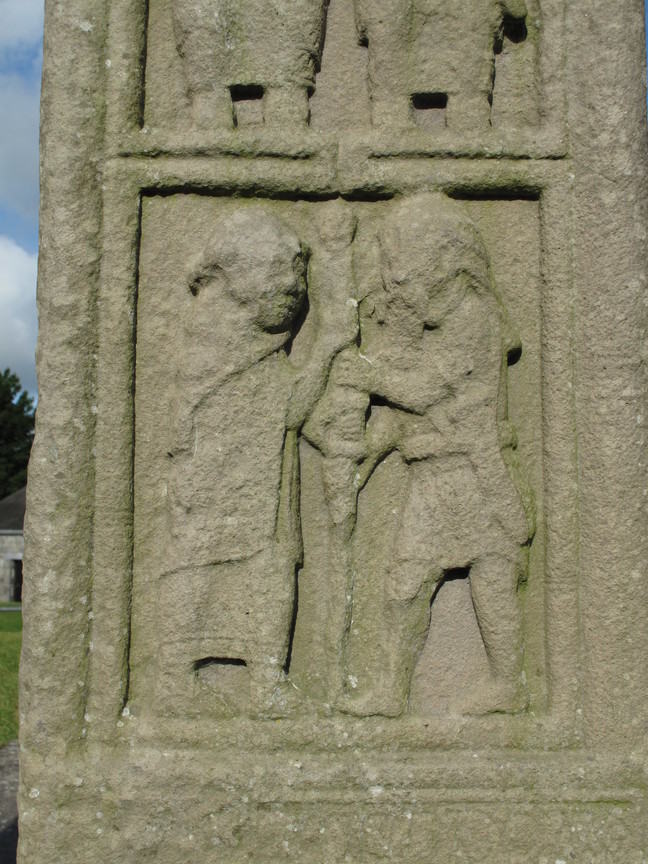 Fig 1. Panel on the Cross of the Scriptures at Clonmacnoise (c. 909-16AD) thought to show king Flann, the patron (right), and abbot Colman of Clonmacnoise (left) marking the act of royal patronage of the site. Photo: Rachel Moss

Sometimes details of the donor are recorded in a colophon – an inscription recording details of the making of a book, occasionally at the start, but typically at the end. If such a record existed in the Book of Kells, unfortunately it was lost along with the ten or so folios now missing from the start and finish of the manuscript. Surviving manuscripts roughly contemporary with the Book of Kells suggest that the abbot of a monastery often played a vital role. In the case of the Book of Armagh (c. 807AD) the book was made for Abbot Torbach by the scribe Ferdomnach and others, while the MacRegol Gospels were written and illustrated by the abbot of Birr c. 820AD. In this context, it is worth noting that on his death in 802, Connachtach, abbot of Iona was described as a ‘choice scribe’.

Whether Connachtach had direct involvement or not, significant resources would have been required. By the latter half of the eighth century, Iona had become a place of pilgrimage for some of the greatest Irish leaders. These included Niall Frossach, king of the Cenél nEógain (a branch of the O’Neill family who ruled over much of north-west Ireland and claimed shared ancestry with Colum Cille) and Artgal, son of Cathal, king of Connaught (the west of Ireland), both of whom spent their last years there. The land at Kells was almost certainly gifted to the fleeing community of Iona in the early ninth century by the Cenél nEógain who owned much of the territory in the area. It seems likely therefore, that while the Book of Kells was the work of religious men, its creation was most likely enabled by the secular powers of the day.