This content is taken from the University of Wollongong's online course, Preventing Childhood Obesity: an Early Start to Healthy Living. Join the course to learn more.
View course
2.1

0:07Skip to 0 minutes and 7 seconds When we think of obesity in young children, we often think that it is caused by poor food habits and eating behaviours or too much screen-based, sedentary behaviour or too little sleep. While these are important behaviours that are associated with unhealthy weight gain, physical activity also plays a key role. We often don’t think this is the case in young children because there is a perception that they are very active.

0:34Skip to 0 minutes and 34 seconds While it is true that young children are the most active age group across the lifespan, you may be surprised at how little activity they participate in during a regular day and how this has likely decreased in the last 30 years, commensurate with the concomitant increase in the prevalence of overweight and obesity among young children. These declines have been clearly seen in cardiorespiratory fitness levels and in some types of physical activity, such as walking or cycling to school. As we discussed in week one, at a basic level, excess or unhealthy weight gain is caused by our energy intake being greater than the amount of energy we expend.

1:14Skip to 1 minute and 14 seconds Although genetics plays a key role, it is largely agreed that the major causes in the high increases in the prevalence of overweight and obesity in young children in the last 30 years have been environmental factors rather than genetic ones, as it is unlikely that our genes have changed dramatically in the past 30 years. However, it should be acknowledged that it is often the interaction of genetic and environmental factors that explain why some children become overweight or obese and others do not when exposed to the same environments. Why is physical activity so important in preventing obesity in young children? Participation in regular physical activity has many health benefits for young children in addition to maintaining a healthy weight.

2:00Skip to 2 minutes and 0 seconds These include stronger bones, better cognitive development, psychosocial and cardiometabolic health, and increased competence in gross motor skills, which are the building blocks for all physical activity. The ongoing health benefits of regular participation in physical activity and the contribution that physical activity has to the energy balance equation highlights why young children should be given the opportunity to develop healthy physical activity patterns from a young age.

Physical activity plays a key role in the cause and prevention of obesity in young children.

It’s true that young children are the most active age group across the lifespan, but their physical activity levels have decreased in the last 30 years due to a range of environmental factors. During this time the prevalence of overweight and obesity in young children has increased.

Regular physical activity has many health benefits for young children in addition to maintaining a healthy weight, including: 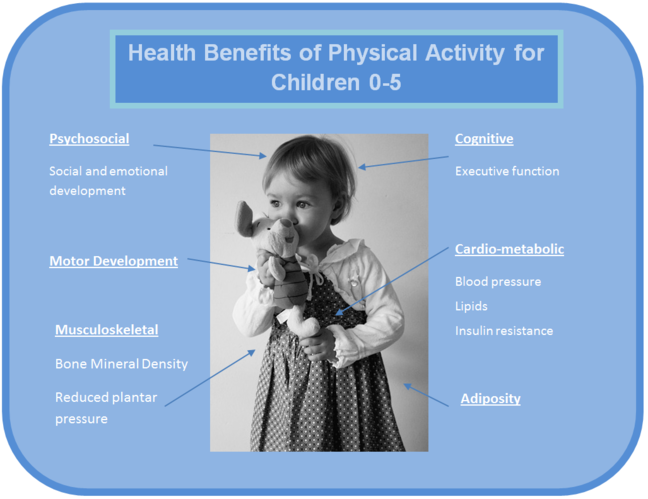