This content is taken from the University of Wollongong's online course, Preventing Childhood Obesity: an Early Start to Healthy Living. Join the course to learn more.
View course
4.9

0:07Skip to 0 minutes and 7 seconds Sleep just doesn’t happen randomly. It is a regulated set of behavioral and physiological states and stages that are thought to occur due to two main processes. A sleep-wake dependent homeostatic process, and sleep-wake independent clock-like circadian process. The homeostatic process refers to the increase of sleep pressure, or the need to sleep the longer that a person has been awake. So basically, it works in two ways. The longer that we have been awake for, the stronger the pressure to sleep becomes, increasing the likelihood of actually falling asleep. And conversely, the longer that we have been asleep for, the more that this pressure dissipates. And therefore, we are more likely to wake up.

0:50Skip to 0 minutes and 50 seconds The second process that is involved in the regulation of sleep-wake behavior is the circadian process. The body has an internal circadian clock, controlled by a part of the brain called the suprachiasmatic nucleus, which is located in the hypothalamus. The circadian process is independent of the amount of preceding sleep or wakefulness but rather, is controlled by this internal clock which is coordinated by the light-dark cycle over a 24 hour period. Melatonin, which is a very important sleep-wake hormone, is also under circadian control and is released at night, or in line with this light-dark cycle.

1:29Skip to 1 minute and 29 seconds This circadian timing system undergoes major developmental changes in the first few months of life, becoming mature by around age six months and remaining relatively stable throughout childhood. These two processes interact, with wakefulness throughout the day, increasing the homeostatic process, and therefore increasing sleep pressure. While the internal circadian process is aligned with the light-dark cycle, meaning that the propensity for sleep is highest at night when the amount of time awake is at a maximum, and it’s also dark.

2:03Skip to 2 minutes and 3 seconds In addition to the homeostatic and circadian processes, there are also other external cues that can influence how much we sleep, such as when and how much we eat, naps during the day in older children and adults, stress, exercise, and also environmental influences, such as ambient temperature and noise.

Sleep doesn’t happen randomly, it is a regulated set of behavioural and physiological states and stages that are thought to occur due to two main processes: A sleep-wake dependent homeostatic process and sleep-wake independent, clock-like circadian process.

In this video we take a closer look at each of these processes. 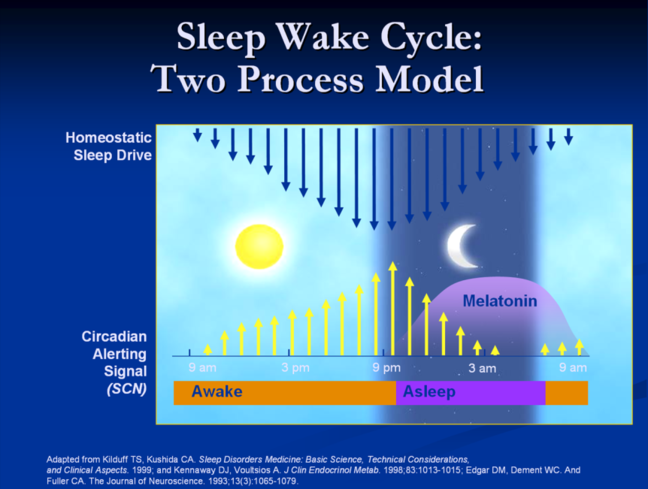 Introduction to Psychology: Sensation and Perception

Learn how our sensory systems work together to help us to perceive and respond to the world around us.