This content is taken from the University of Reading's online course, The Future of Farming: Exploring Climate Smart Agriculture . Join the course to learn more.
View course
3.8 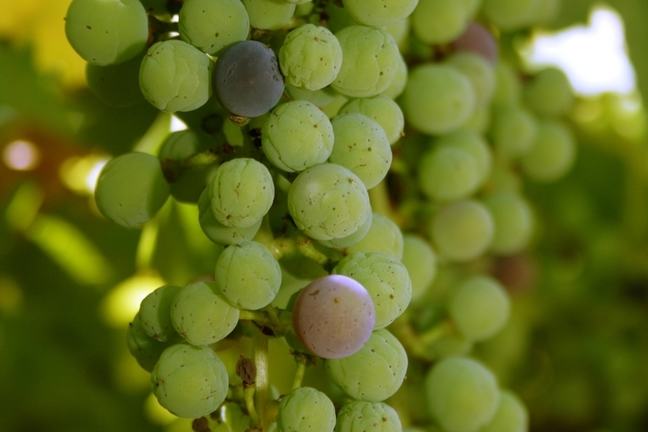 A certain degree of variation in grape composition and wine flavour is normal. For example, the vintage effect describes the differences in quality and typicity between years of the wine from a certain vineyard, whereas the terroir effect describes the variation in flavour between different vineyards, areas or regions. However, long lasting climatic changes have the potential to completely change the characteristics of famous wines.

Effects of climate change on grapes and wine.

Lack of water or high temperatures will challenge the process of growing wine in Southern areas. The potential of the plants to cope with heat and drought will be highly affected by the soil they grow in. Moderate water stress can be beneficial to make a good wine, which is why in some areas of Southern Europe vines have been planted on comparatively dry and unproductive soils. However, the effects of high temperatures and lack of water will be exacerbated in such poor soils. Environmental factors will cause stress on the plant, which can affect the grapes, ultimately resulting in changes in the wine they produce. These include: 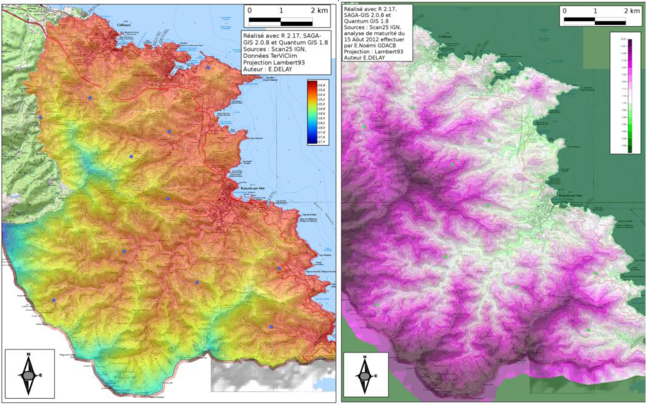 Figure 2. These two maps illustrate how acidity is reduced with temperature within the Banyuls-Colioures AOC area. While the left map shows temperature, with the red, hot areas in lower altitudes, the right one shows acidity of the grapes for the same area, with white areas being the least acidic. © Delay 2015

The impact of climate change on the amount of grapes the vine produces is difficult to predict due to the large number of variables involved in growing grapes. For example, plant growth in general could benefit from raised levels of CO2 in our atmosphere, but at the same time heat, drought and solar radiation can have negative effects on plants. Lower yields can be expected in areas that are getting hotter and drier, while yields are likely to increase in regions that are currently below the comfort zone for vines to grow. This is the case in Northern regions such as Champagne in France. 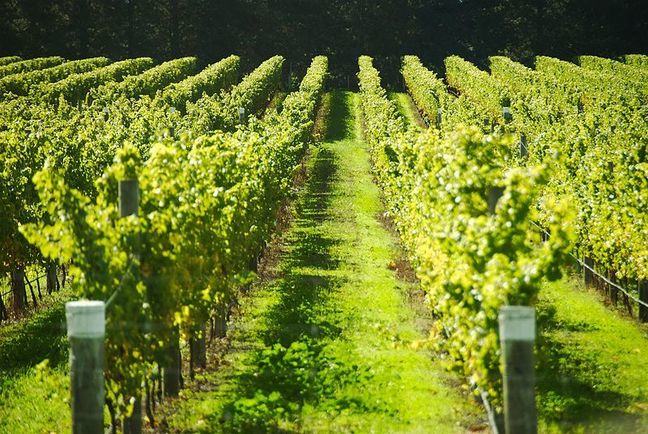 Effects of climate change on the management of a vineyard

Climatic changes not only affect yield and quality, they can also alter the phenology of the vine (the whole cycle of growing grapes). Higher temperatures will result in all phenological states of the plants happening earlier: budding, flowering, grape set, and maturing of the grapes, which can result in changes in the whole management schedule of a vineyard. For example, if a warm winter which causes earlier budding is followed by a warm spring and summer, all phenological stages are earlier.

With warmer temperatures resulting in a shift in phenology, the direct impact of climate change is amplified. The increased temperatures due to climate change (eg+ 2°C) encourage the ripening period to occur during a warmer time of the year (eg+ 2°C, resulting in an overall increase of +4°C during the ripening of the grapes). Currently, with an increase in the mean temperature, grapes are harvested about two weeks earlier than compared to the period from 1960-1980. According to current climate models there could be a rise in temperature as high as 3 to 8°C during the period of fruit ripening in France and this continuous rise in temperature may result in an even earlier harvest.

Climatic changes could also influence the impact of pests and diseases, such as parasites and fungi (eg mildew), on plants. Not only would certain areas suffer from climates that are more favourable for pests, climate change could also result in a geographical shift in the distribution of insects or fungi, which may cause problems in regions they have so far been absent from.

A higher infestation with parasites and diseases could not only be directly be influenced by environmental conditions, but also by an increased susceptibility of the plant to infections as climatic stressors could result in a reduction of the immune response of the plant. This could lead to a higher intensity in labour on the vineyard or an increased use of pesticides.

Problems with pests and parasites are more likely to affect Northern areas, where higher temperatures will likely be associated with considerable rainfall, creating a wet and warm climate favourable for fungi and other pests.