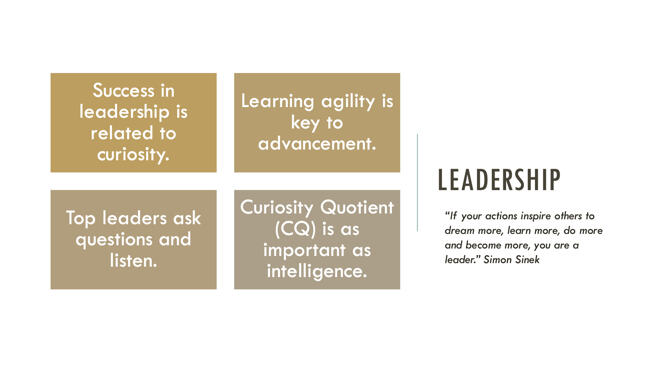 Are successful leaders typically more curious than the rest of us? Is curiosity one of the secrets to better leadership?

According to most behavioral scientists and business leaders, the answer is an unqualified yes. While curiosity, many will say, does not ensure that a business leader will be successful, you won’t find many successful business leaders who are not highly curious. In fact, many of them, including Microsoft founder Bill Gates, describe curiosity as one of the three Cs of successful leadership along with creativity and commitment.

Considering this emerging tenet, it might be surprising to learn that some leaders are reluctant to apply this principle. The thought is that curiosity is a distinction that separates excellent leaders from those deemed less effective. Those deemed less effective, research suggests, tend to avoid failing, being criticized, making hard decisions, taking responsibility, or being unable to reach an important goal. As a result, they may fear that their curiosity could expose them as not being as smart as they want people to believe.

Also, as a result, those leaders often surround themselves with individuals who are experts to compensate for their own lack of curiosity. Know anyone like that? That practice tends to inhibit them from developing curiosity skills on their own. Effective leaders, by contrast, appear to be comfortable in the space of the unknown, the uncomfortable.

The same curiosity that can be stymied by fears becomes the antidote for overcoming them. Deborah Bowie, CEO of Transforming Lives through Charitable Giving, stated, “The opposite of fear is not bravery, but curiosity. When we know more, we fear less.”

But how do less effective or aspiring leaders develop curiosity? And how is that curiosity best expressed?

When asked to name the one attribute CEOs will need most to succeed in these turbulent times, Michael Dell, the chief executive of Dell, Inc., replied, “I would place my bet on curiosity.”

What’s emerging is an era in which leaders are not expected to have all the answers; rather, they demonstrate a strong curiosity and propensity for asking questions. ‘‘Curiosity,’’ Dell noted, ‘‘inspires leaders to continually seek out fresh ideas and approaches needed to keep pace with change and stay ahead of competitors.’’

Warren Berger, author of A More Beautiful Question: The Power of Inquiry to Spark Breakthrough Ideas, talked about the notion that curiosity can be good for business, an idea that’s not entirely new. He said that Walt Disney declared that his company managed to keep innovating “because we’re curious, and curiosity keeps leading us down new paths” [1].

While conducting research for his book [2], Berger uncovered numerous examples of leaders and CEOs (including Netflix’s Reed Hastings, Square’s Jack Dorsey, and the team behind Airbnb who relied on a strong curiosity as the foundation for reinventing entire industries [1].

Berger told how Dorsey was curious to know why an artist friend lost a big sale to a potential customer simply because the artist couldn’t accept a credit card. Dorsey disliked the fact that only established businesses, not smaller entrepreneurs, were able to conduct credit card transactions. That curiosity resulted in the creation of Square, a highly accessible credit card reader. He stated that “endless desire to explore new paths” becomes even more important in today’s fast-changing, innovation-driven marketplace.

Dave Ulrich [3] is known as the Father of Modern HR and HR Thought Leader of the Decade. He has written thirty books and more than 200 articles about leadership. In my interview with Dave, he talked about the power of soft skills and experimentation. He’s also a strong advocate of “failing forward” and the importance of having curiosity not about the event itself but about the process leading up to the event. “What did we learn along the way about how we got here?” becomes the question.

So, if curiosity is such a vital element of effective leadership, why is it not more prevalent among leaders? The characteristic of curiosity is alien to traditional leadership norms. Many managers and top executives have risen through the ranks by providing fixes and solutions, not by asking questions. And once they’ve attained a position of leadership, they may feel the need to project confident expertise. To acknowledge uncertainty by wondering aloud and asking deep questions carries a risk; the leader may be perceived as lacking knowledge.

While we may tend to think of curiosity as a hardwired personality trait, meaning that we are born with it, Ian Leslie, author of Curious, said curiosity is actually “more of a state than a trait”, and that we all have the potential to be curious but only under the right conditions [4].

Leslie noted that curiosity bubbles up when we’re exposed to new information and then find ourselves wanting to know more. Hence, the would-be curious leader should endeavor to get out of the bubble when possible and to seek new ideas, influences, and experiences to fire up the desire for learning more and digging deeper.

Even when operating within familiar confines, curious leaders tend to see things from a fresh perspective. Those I researched seemed to have a penchant for bringing a beginner’s mind approach to old problems and stubborn challenges. They continually examine and re-examine their own assumptions and practices. They also ask penetrating “Why” questions and speculative “What if” and “How” questions.

Curious leaders tend to urge people in their organizations to question everything. This can serve to model the behaviour for others, though leaders may have to go much further by providing sufficient freedom and incentives to actually create the conditions for curiosity to flourish company-wide.

In the end, it isn’t necessarily easy for a leader to foster curiosity on an individual or organisational level, but it may be well worth the effort. “With curiosity comes learning and new ideas,” said Dell. “If you’re not doing that, you’re going to have a real problem” [1].

But if we know these reasons, why do leaders and their teams still struggle?

After analysing a detailed study by Donald Sull, Rebecca Homkes, and Charles Sull published in the Harvard Business Review, “Why Strategy Execution Unravels – And What to Do About It” [5], Hvisdos reduces the issue to one simple conclusion: many leaders lack curiosity.

“Simply defined, curiosity is, ‘the desire to learn or know more about something or someone.’ It is the starting point to every great idea, invention and new business. It is what makes some businesses wildly successful while others are just average, and it’s the real reason why some leaders and their teams succeed, while others fail.”

Leaders fail time and again to understand the situations, people, or customers they are engaging with because they simply aren’t curious about them and feel more comfortable not leaving their comfort zones to find out.

Sull, Homkes, and Sull argued that organizations fail at execution because they don’t adapt quickly enough to changing market conditions. Most leaders solve problems by trying to reduce them to single dimensions. And while that’s true, what they really lack is more fundamental. They lack what the authors describe as “business curiosity.”

In the following step, we will be hearing from Dr. Amy Edmondson, Harvard where myself and Amy discuss taking the lead.

We ask the question: what holds leaders back?