This content is taken from the University of York's online course, Exploring Everyday Chemistry. Join the course to learn more.
View course
1.21 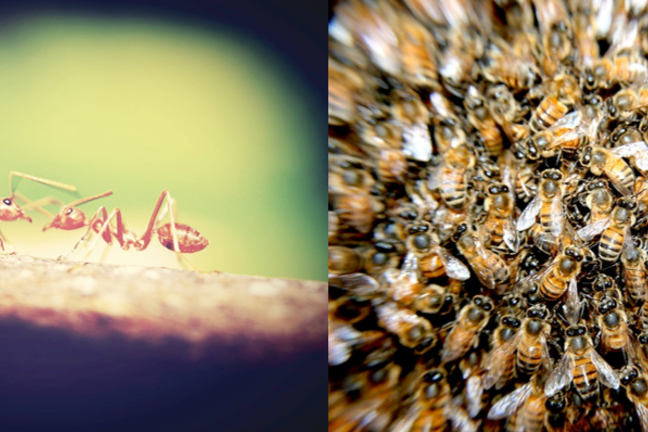 On flying ant day, the queen sets off and emits pheromones that attract the males. When they follow her, she flies away; fleeing means that only the strongest are left to mate with. This helps to make sure her offspring are as fit and fast as they can be!

Pheromones are generally recognized as a single or small set of compounds that transmit signals between organisms of the same species, to change their behaviour. They are typically just one part of a larger collection of odourants emitted from an insect or animal, and some pheromones do not have a discernable scent. The role of odourants in insect communication is very important and, as we will see, they use an amazing variety of organic compounds. They can perceive and respond to remarkably small quantities of certain organic compounds, which include alarm, food‐trail and sex pheromones.

Alarm pheromones, as the name suggests, are released to trigger flight or aggression. For example, the presence of an intruder can cause a guard bee to release alarm pheromone from her sting chamber, which contains more than 20 known compounds, which induce alerting or stinging. Stinging is released by a mixture of esters and alcohols, including 3-methylbutyl ethanoate, and especially butyl ethanoate and pentan-1-ol (also called 1‐pentanol). During an inspection, a beekeeper uses a smoker (to generate smoke) as it masks the alarm pheromones released by guard bees, keeping the rest of the hive calm.

Social insects commonly use trail pheromones. For example, ants mark their paths with pheromones consisting of volatile hydrocarbons. Some ants lay down an initial trail of pheromones as they return to the nest with food. This trail attracts other ants and serves as a guide. The fire ant uses a mixture of two α‐farnesenes; changing the position of the groups around the C=C bonds gives 4 possible α‐farnesenes, but the two below are the only ones found in fire ants and elicit an attractive response. At any given moment each ant contains only about a nanogram of trail pheromone (a nanogram is one billionth of a gram, or 0.000000001 grams). As long as the food source remains viable, visiting ants will continuously renew the pheromone trail.

In animals, sex pheromones indicate the availability of the female for breeding. Bombykol, a pheromone released by the female silkworm moth to attract mates was the first pheromone to be identified. From half a million female moths, only 6.4 milligrams (mg) of the pure pheromone was isolated and its structure characterised (a milligram is one thousandth of a gram, or 0.001 grams).

Similarly, only 1.5 mg of serricornin, the sex pheromone of the cigarette beetle, was isolated from 65,000 female beetles. Serricornin has 3 chiral centres. If the arrangement of the OH group at the 7‐position is changed, then this diastereomer inhibits the effect of serricornin, emphasising the importance of having the correct chirality.

(+)‐Disparlure is the sex pheromone of the gypsy moth – which is a serious pest of forests. As it is available in minute amounts from moths, it is now made in the lab and used as a lure to attract males to traps.

This so-called mating disruption technology, which disrupts the mating process in an effort to reduce populations, has also been used in New Zealand to protect apples against pests such as the codling moth – the main component of the codling moth pheromone being (E,E)-8,10-dodecadien-1-ol (or codlelure).

Similarly, the Japanese beetle is a devastating pest of trees, grasses, and cultivated crops. Its sex pheromone is (R)‐japonilure, which has been synthesised at York – it was important to make just the R‐enantiomer because the S‐enantiomer inhibits the attraction.

Finally, let's look at the queen bee ‐ she exerts her influence over the hive by means of the Queen Mandibular Pheromone or QMP. This acts as a mating attractant for the drones, and to suppress the reproductive systems of the workers, ensuring that the queen is the only reproductive female in the hive. QMP is a mixture of 5 compounds the most important of which is (E)‐9‐oxodec-2‐enoic acid – switching around two of the groups on the C=C bond gives the Z‐compound, which is not found in nature.

Again, we see how the shape of organic compounds influences their biological properties – in a pheromone, changing around the groups at a chiral centre, or on a C=C double bond, can have major consequences.

Some interesting research has recently shown that orchids mimic human body odour to attract mosquitoes. The orchid Platanthera obtusata depends almost exclusively on mosquitoes for pollination, but the orchids are a bland green colour, and blend in with their background. So how do they attract the mosquitoes? The answer lies in the orchid’s bouquet! Researchers found a strong, specific pattern of brain activity when mosquitoes were exposed to the bouquet, and certain features of the orchid-specific brain pattern were recreated when mosquitoes were exposed to body odour. These results provide strong evidence that orchids use a particular bouquet that shares features with blood-hosts (like ourselves!) to attract the mosquitoes they rely on for pollination!

Researchers have successfully engineered plants to produce chemical attractants like those released by insects to find mates. These plant ‘factories’ could be used to lure and trap nuisance insects as an environmentally friendly alternative to pesticides and synthetically produced attractants. Putting transgenic plants in the field could attract pests away from crops. However, controversy persists over whether the anticipated advantages of using GM plants outweigh their anticipated disadvantages - for example, transgenic plants may affect and disrupt other ‘non-target’ insect species (you may have read about the monarch butterfly controversy). What do you think?