This content is taken from the University of York's online course, Exploring Everyday Chemistry. Join the course to learn more.
View course
4.14 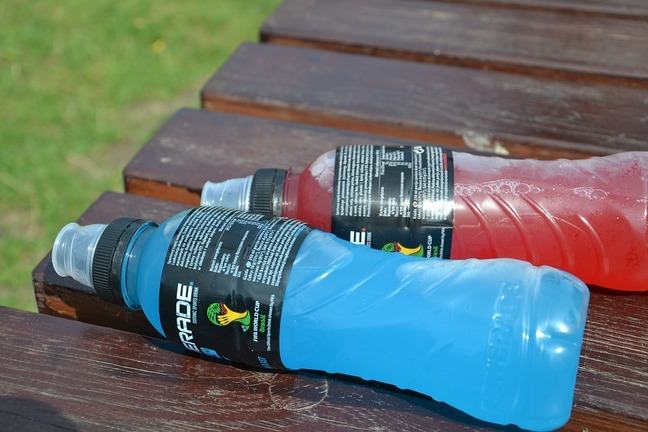 Sodium levels that are too high or too low during exercise can harm athletes. But, research from 2020 showed that electrolyte supplements, popular with endurance runners, can't be relied on to keep essential sodium levels in balance.

Understanding the role of polymers in nutrition

The global sports nutrition industry is estimated to grow to a net worth of around $81.5 billion by 2023. Aggressive marketing, changing consumer preferences and the increase in social media following of sports celebrities and lifestyle bloggers may explain the increasing demand for performance sports foods and drinks.

As such many corporations and private enterprises have attempted to enter the lucrative market with a mixture of organic and synthetic foodstuffs. We will examine some of the common polymeric ingredients in these sports-targeted products.

Maltodextrins are short polymer chains consisting of two to twenty D-glucose monomers – the D-glucose units are linked together by acetal functional groups. They are produced by the partial hydrolysis of starch, which is a much longer polymer containing many more D-glucose units linked together. The hydrolysis of starch occurs under acidic aqueous conditions – protonation of the bridging acetal oxygen forms a good leaving group (step 1) that is kicked out by the second hemiacetal oxygen (step 2). Water then adds to the positively charged intermediate (step 3), then on loss of a proton (step 4), the component D-glucose units are formed. The structure of D-glucose can be drawn in different ways, but most commonly it is shown as a six-membered ring. Notice the three secondary alcohols, the primary alcohol, and the hemiacetal functional group, as well as the presence of five chiral centres.

The glucose monomers are a quick and steady source of energy, which is taken post-workout in order to restore blood glucose levels and provide energy for protein anabolism – the synthesis of complex protein molecules used for construction of muscle tissue from amino acid building blocks.

The maltodextrin polymers are preferred over taking glucose monosaccharides as the polymer solution will have a lower osmolarity than the monosaccharide solution. Osmolarity is a measure of the number of particles per litre of solution. With the glucose monomers of maltodextrin linked in a polymer chain the same total number of monomers will have a lower osmolarity in maltodextrin. Water tends to move from areas with a low osmolarity, where a low concentration of molecules is dissolved in solution, to an area of higher osmolarity where a greater number of molecules are dissolved in solution. Therefore, due to the difference in osmolarity between the glucose solutions in the intestine and the blood, maltodextrins are more likely to be absorbed than a simple glucose solution (i.e. pass from the intestine into our bloodstream). Many sports drinks have a high energy content due to the carbohydrates dissolved in them. Although these additional carbohydrates are beneficial, overloading a drink with too high a concentration of carbohydrates can reduce the rate of uptake of another essential nutrient, namely, water.

Water makes up approximately 60% of the average adult’s body mass and is an essential solvent used to transport nutrients in the blood plasma. Playing sports or exercising under hot conditions can result in an increase in sweating and, eventually, dehydration.

In order to provide an adequate water supply to the body, drinks with a low carbohydrate content are preferred. A low number of carbohydrates leads to a very low molarity, encouraging water to be absorbed by the body (where blood molarity is greater).

Sodium ions, often sourced from common salt (NaCl), can aid the uptake of other nutrients and are often found in high concentrations in sports drinks (10-25 mmol/L) relative to non-specific commercial soft drinks (1-2 mmol/L). A high salt intake in a diet, with little exercise, can result in dangerous increases in blood pressure, however, the main issue for salt within sports drinks is its unpalatable taste. Though greater sodium ion concentrations would increase nutrient absorption, a balance must be struck between this efficiency and the unpleasant taste that can result from salty beverages.

Whilst carbohydrates provide the energy for exercise and protein formation, they do not provide the building blocks of proteins – namely, the amino acids. Proteins are polymers made of amino acid monomers. Each amino acid shares an identical basic structure with an alternating side chain (typically represented as R) providing the variation seen in amino acids.

Of the twenty amino acids found in the proteins of our body, nine are considered “essential” as they cannot be synthesised by our bodies and therefore must be acquired from the food we consume.

To ensure that these “essential” amino acids are present, as well as to provide a sufficient amount of amino acids to synthesise muscle protein, bodybuilders often consume protein supplements. These come in the form of the amino acid monomers themselves or as complex proteins, as found in popularised protein shakes, which contain all of the amino acids required by the human body.

The amide (or peptide) bonds that link together amino acids in peptides are formed from reactions between the amine groups and carboxylic acid groups in different amino acid molecules. Water is formed as a by-product and so this is called a condensation reaction. The reaction mechanism involves a nucleophilic acyl substitution – the amine acts as the nucleophile and the carbonyl carbon is the electrophilic site. To make a peptide in the laboratory, often an acid catalyst is used, which protonates the carbonyl group of the carboxylic acid, making it a stronger electrophile.

Alternatively, under certain conditions, protein chains can be broken into their constituent amino acids by reaction with water in a hydrolysis reaction. This involves the breaking of bonds using water and, as such, protein chains ingested from food can be broken into their substituent amino acids and then re-formed into the protein polymers which make up our body.

As products are continually refined in order to find the mixtures and concentrations most effective at improving exercise and sporting performance (including reducing muscle fatigue), the basic requirements of carbohydrates and proteins will still remain essential for everyone. Both those partaking in vigorous exercise and living their daily lives.

The marketing of sports drinks and protein powders is a controversial topic. For example, the British Dietetic Association (BDA) recently stated that marketing for some protein powder products is both “wrong and immoral”. The American Heart Association says water is best for hydration and adds, “Sports drinks with electrolytes, may be useful for people doing high intensity, vigorous exercise in very hot weather, though they tend to be high in added sugars and calories.” Recently, in the UK, a number of supermarkets banned the sale of energy drinks (with high levels of sugars and caffeine) to under 16-year olds.

Have any of you tried sports drinks? If so, are they your favourite choice for hydration or do you prefer water or something else?