0:07Skip to 0 minutes and 7 seconds Let’s think back to a volcanic rock. It consists, lastly, of silicon, oxygen, aluminium, and iron. These elements form minerals, and these minerals makes up the rock. We know how the elements came into existence, and we know how Earth was formed from gravity processes and how it is orbiting the sun. But why do we have volcanoes with hot magma that turns into lava and cools to create rocks? And how did the earth form and take the shape we know today with mountains, continents, and oceans?

0:40Skip to 0 minutes and 40 seconds To understand this, we need to look at how the Earth formed and evolved through a series of extreme events that allowed it to become habitable. The very early Earth, formed shortly after the solar system, was a hostile place. It was like a hot melting pot of elements. But as the earth started to cool, it started to separate its element into different regions and into a structure that exists today. The Earth’s structure consists of an inner, middle, and outer region. The inner part is thousands of kilometres under our feet. It is constantly under extreme pressure and experiencing very high temperatures. It hosts the Earth’s core, which is mostly made up of iron.

1:24Skip to 1 minute and 24 seconds The core is invisible to us, but we benefit from it in our day-to-day lives. It creates a magnetic field around Earth, shielding us from exposure to dangerous cosmic rays coming from space. The middle part of Earth is the mantle,

1:47Skip to 1 minute and 47 seconds processes. This process means that we can sometimes see into the mantle via volcanoes, where the mantle meets the surface for volcanic eruptions and the formation of lava. As the hot lava reaches the surface, it solidifies and turns into Earth’s third layer, the crust. The crust is Earth’s outer shell that we live on. This is the surface we can walk on or map out, including the sea floor and the highest mountains. This outer crust is covered by an atmosphere, a fourth shell, that contain gases, including oxygen, which is critical for us human beings. The forming of the earth and the separation into the shells of core, mantle, and crust are extreme events.

2:34Skip to 2 minutes and 34 seconds But there was another extreme event which left a visible impact that we can see today– the formation of the moon. During the early lifetime of earth and the solar system, the earth was bombarded by meteors. Within the first 100 million years of its lifetime, Earth was impacted by a massive meteor, not much smaller than the planet itself. The collision of the early Earth and the impactor had the energy to scatter elements over a huge part of space. And in the end, through gravity, the moon was formed. Earth was still far from the planet we know today. But these extreme events, in its infancy, helped to lay the basic foundation for it to become a habitable planet.

In this video, Dr Morten Andersen explains how Earth began to take the shape we know today.

During the first 800 million years or so of Earth’s existence it was continuously bombarded by debris mostly from within its orbit.

The collisions made the Earth grow in size, and at the same time made it an inhospitable place. Over time, debris within Earth’s orbit cleared and there were less impacts.

Today, the amount of material falling to Earth is estimated to be around 40,000 tons a year, mostly in the form of dust particles. These impacts do not disturb our current ecosystem.

The formation of the Moon

One of the most violent bombardments was a collision with a massive meteor that led to the formation of the Moon. The collision scattered huge amounts of debris into space, which eventually clustered together and formed the Moon. 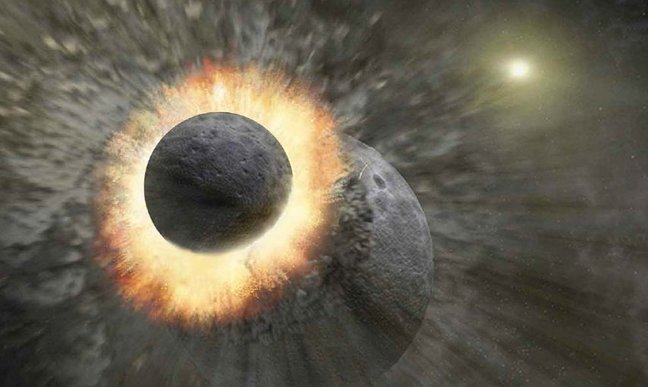 Whilst it is unclear what role the Moon played in the emergence of life on our planet, it did have a major and lasting effect on the evolution of life and the nature of our habitat.

From a cosmological viewpoint, the formation of moons is not a rare event and many of the larger planets in our Solar System have multiple moons. For example, Mars has two moons and Jupiter has 79 known moons.

However, from a geological viewpoint the formation of the Moon was an extreme event and it exerted a strong influence on the future of our planet.

Internal layering of the Earth

The early Earth was exposed to violent conditions and was incredibly hot, much hotter than it is today. At this time, the material comprised of the heaviest elements (such as iron) migrated to the deepest layer of the Earth, forming the core.

The middle part of the Earth is the mantle. It surrounds the core and is made up of material comprised of lighter elements. Due to the heat contained within it, melting occurs in the mantle which leads to the production of magma.

This layering or differentiation of the Earth into a structure of core, mantle, crust and atmosphere also kickstarted a key process at the surface of the Earth, the movement of tectonic plates.

This is the theory that Earth’s surface is made up of several plates that move over the mantle and is a unique characteristic of Earth in our Solar System. The plates move continuously, driven by temperature differences across the mantle. This enables chemical elements from deep in the Earth to flow out to its surface, which is essential for the creation of life and sustaining it.

When did differentiation occur?

This is quite fast relative to the age of the Earth (approx. 4.5 billion years) and established pretty stable conditions at the Earth’s surface. This is one of the key extreme events that had to happen on our planet to make it habitable.