0:07Skip to 0 minutes and 7 secondsVolcanic eruptions are incredibly diverse, so we need to classify them to understand the different styles of eruption. The two main categories are effusive eruptions and explosive eruptions. Understanding the difference between these two is very important. The material that comes out of a volcano during the eruption is either a type of lava or a mixture of hot gases and broken fragments of magma. Lava is what we call magma if it flows out of a volcano as a liquid. It can move relatively fast, with speeds of several tens of kilometres an hour, or it can move very slowly, to the point that it hardly seems to be moving at all.

0:45Skip to 0 minutes and 45 secondsIf lava is flowing out of the volcano, we would call this an effusive eruption. On the other hand, when gas and broken fragments are shot up into the atmosphere, the magma has literally exploded before falling back to Earth. If the magma has been blown to pieces, we would call this an explosive eruption. The broken fragments caused by the explosion are called pyroclasts, or if they are smaller than two millimetres, you call it volcanic ash. You might already be familiar with the term, as you'll often hear it when eruptions are being reported in the news. A volcano can produce both types of eruptions, and in some cases, the style can change during the course of a single eruption.

1:26Skip to 1 minute and 26 secondsSo what is it that causes a change in style during am eruption? Well, magma is a very unique material that isn't an ordinary liquid like water, for instance. If you look at magma in more detail, you can see that there are two properties that make it such a unique liquid. First of all, magma can behave both as a liquid and as a solid. This is a property it shares with a fun children's toy called Silly Putty. When it's slowly stretched apart, you can see the material flowing gently, similar to a sticky liquid like honey. But when it's dropped on a hard surface, it bounces. And when it's stretched quickly enough, it breaks very sharply.

2:08Skip to 2 minutes and 8 secondsThis property explains how an explosive eruption occurs. When the magma approaches the earth's surface, it's stretched so quickly that it behaves as a solid and breaks apart, kind of like glass shattering. This process is called magma fragmentation. The reason why it is being stretched so rapidly is due to another property of magma. It contains volatiles. These are chemical elements that create gas bubbles when there's a drop in pressure. This is a phenomenon that you are probably familiar with. It's the same thing that happens when you open a can of fizzy drink after shaking it or when you pop a bottle of champagne. Most of these drinks contain carbon dioxide that create the bubbles.

2:49Skip to 2 minutes and 49 secondsIn magma, this comes mostly from water and to a lesser extent, from carbon dioxide and sulphur dioxide. When these volatiles start to form bubbles, the magma accelerates quickly to the surface. There's a classic experiment that demonstrates this perfectly by using Mentos mints and Diet Coke. Dropping Mentos into Coke causes bubbles to form rapidly. The Mentos drastically lowers the energy needed to produce bubbles. The new volume generated by these bubbles is so massive it forces the liquid to accelerate upwards, creating a fountain of foam. In magma, the rapid formation of bubbles comes from pressure being lowered as the magma moves from deep inside the earth's crust up to the earth's surface.

3:34Skip to 3 minutes and 34 secondsThis accelerates the magma and can stretch it to a point that it breaks and creates an explosive eruption. So magma that contain lots of volatiles are much more dangerous, as they are more likely to blow. In basic terms, we can distinguish between these two important styles of eruption by asking a very simple question-- does it flow or does it blow?

When gas and broken fragments of magma are shot up into the atmosphere, this is called an explosive eruption. The broken fragments are called pyroclasts, or if they are smaller than 2 mm we call it volcanic ash.

When lava flows out of a volcano, this is called an effusive eruption.

How do we measure explosive eruptions?

The most commonly used scale to determine the magnitude of an explosive eruption is called the Volcanic Explosivity Index or VEI.

It is based on the total volume of erupted material referred to as tephra. The VEI is a discrete scale with numbers going from 0 for non-explosive eruptions up to 8.

This means that VEI of 6.5 does not exist. It is either VEI 6 or VEI 7. It is a logarithmic scale, meaning a VEI 7 eruption is 10 times larger than a VEI 6 eruption.

In order to determine the VEI of an eruption, volcanologists go out in the field to study the material that has been deposited by ancient eruptions. Through careful mapping, they can determine the extent and thickness of the erupted deposits, which enables them to estimate the VEI.

An example of such a map is shown in the figure below. 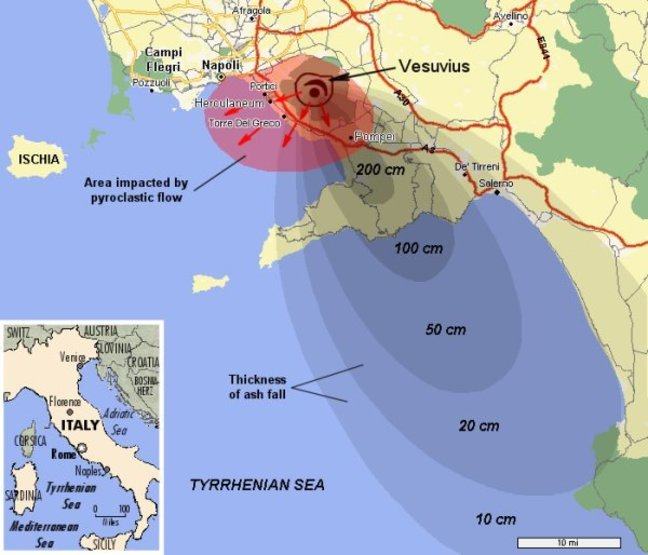 From this field study, volcanologists estimated the 79 AD eruption of Vesuvius to have ejected about 4 km3 of tephra. This makes it an VEI 5 eruption.

How do we measure effusive eruptions?

The reason for this is that they tend to have long pauses and the slow outpouring of lava is not continuous in time. So it’s not easy to determine when one ends and a new one begins.

The most active effusive volcano in the world today is Kilauea in Hawaii. Its most recent eruption is called the Pu‘u ‘Ō‘ō eruption. It lasted 35 years, starting on the 3 January, 1983. It ended in spectacular fashion in June 2018 with a collapse of the crater floor and the lava lake contained within it. 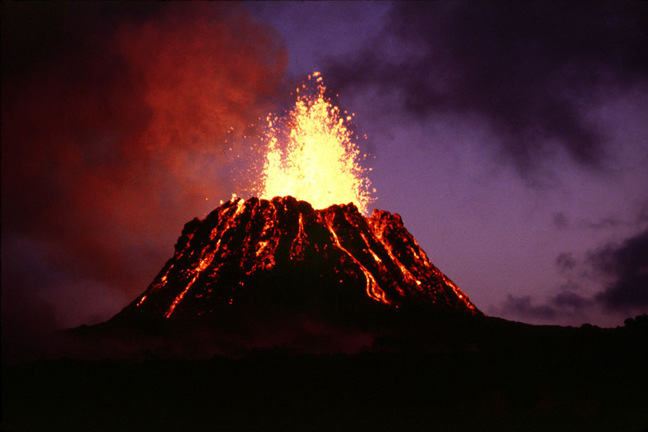 After this there were some spectacular fissure eruptions elsewhere on the island up until September 2018. They are considered separate from the Pu‘u ‘Ō‘ō eruption, which occurred at the volcano’s summit.

The lava that erupted covered more than 144 km2, which would envelop a city like Cardiff entirely under lava. Its erupted volume is estimated to be more 4.4 km3.

This is similar to the erupted volume of the 79 AD eruption at Vesuvius. However, that one was much more destructive as the same amount of material erupted in only about 24 hours time. The rate with which material comes out of the ground is illustrative of the difference between effusive and explosive eruptions.

In order to compare the magnitude of effusive eruptions, 3 indicators are used (instead of 1 for explosive eruptions):

In 2.10 Experiencing volcanic eruptions you chose a volcano and added it to our map. What types of eruption has that volcano experienced? When did they occur?

Add and discuss your findings in the comments below.