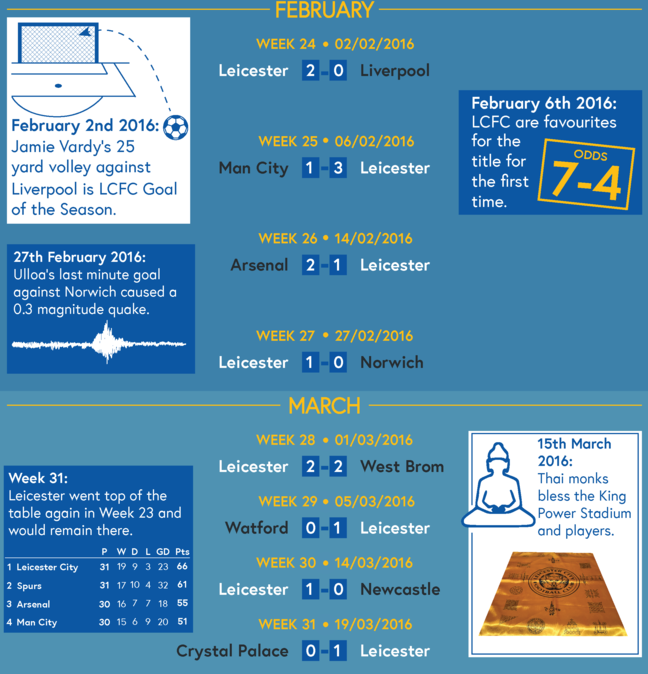 At the beginning of February, and despite being top of the League, very few people actually believed that Leicester City would go on to become champions. Fans in Leicester were thoroughly enjoying the ride, but most would have happily settled for a Champions League place by the end of the season. The media were almost universally of the opinion that Leicester City would, at some point, falter – and that the usual big clubs would take over. The ‘natural order’ would be restored.

That all changed in just two matches within the space of four days. On 2nd February, Jamie Vardy opened the scoring against Liverpool at the King Power Stadium with a stunning 25-yard volley – then sealed the win with a second. He talked through them for the official Leicester City TV channel.

Four days later, City were away at Manchester City and completely outplayed the home club in front of a live TV audience, winning 3-1. Following the game, bookmakers installed Leicester City as favourites for the title for the first time (odds of 7/4), and fans and media alike started to believe it could be done.

A defeat at Arsenal (City’s third, and final, loss of the season) allowed Spurs – who were also having their best season for many years - a chance to close the gap in the table, but Ranieri’s team responded in the manner of seasoned champions, grinding out five 1-0 wins over the following six games to keep Spurs and the chasing pack at bay.

The first of those 1-0 wins, at home to Norwich City, was won in the last minute of the match through a goal from Leo Ulloa. The resulting noise in the stadium was recorded by University of Leicester researchers at magnitude 0.3 on the Richter scale. Measurements continued for the rest of the season, dubbed #vardyquake and reaching a peak of 0.4 magnitude at the final game of the season.

Off the pitch, Claudio Ranieri and the club’s Thai owners were providing fans and the media with plenty of interest. They revealed that Thai Buddhist monks had been blessing the stadium and pitch to wish the team luck; and on 3rd April the club Chairman provided all fans with free beer and doughnuts to celebrate his birthday and the club’s amazing season so far.