This content is taken from the Durham University's online course, Forensic Archaeology and Anthropology. Join the course to learn more.
View course
3.12 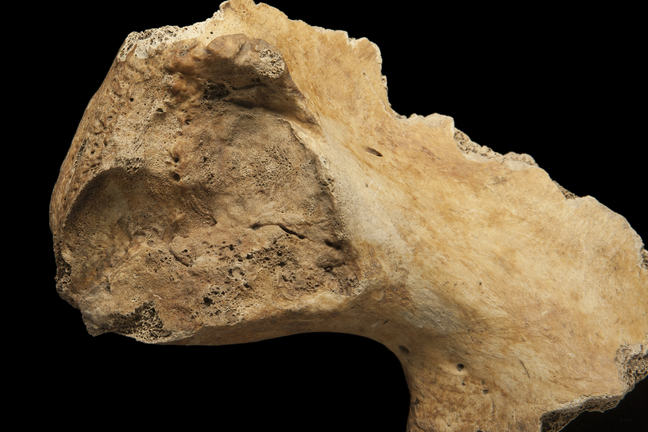 The auricular surface (the joint surface) on the ilium of the pelvis.

Age Estimation from the Pelvis

Age-related morphological changes in adults occur through the processes of remodelling and degeneration. Unfortunately, there is a high degree of variability between individuals in skeletal ageing because of the interplay between a person’s genetic make-up as well as their living environment and cultural context. In addition, the patterns of morphological change can be very subtle and this leads to disagreement between observers when recording the stage of degenerative changes. As a consequence, osteologists tend to employ broad age categories for adult skeletal remains. For example, Buikstra and Ubelaker (1994) use the following terminology:

In particular, you will note the very broad ‘old adult’ category. This is because of the increasing variability in skeletal traits with age, thus reducing the accuracy of the techniques available. Current research is trying to improve our ability to estimate the age of older individuals (see Further Reading)

The pelvis is frequently used to make age-at-death estimations, focusing on the pubic symphysis (where the two halves of the pelvis meet at the front) and the auricular surface (where the base of the spine joins the pelvis). These parts of the pelvis might sound familiar to you, as we have discussed them in our sex estimation section and in the video on adult age estimation.

The pubic symphyseal face undergoes regular morphological changes with age. This part of the skeleton has been used for adult skeletal age estimation since the 1920s. The original method has undergone many revisions since then. Today, the Brooks and Suchey method, with accompanying reference casts for males and females in each stage, is the most commonly used. 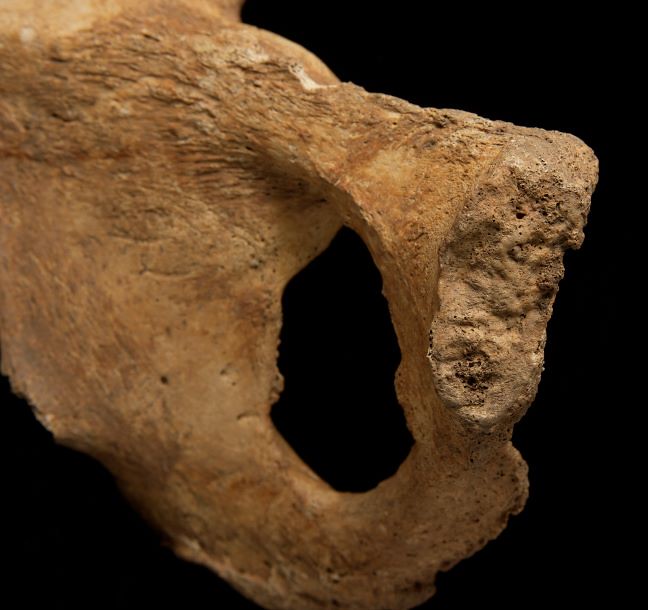 The Brooks and Suchey method divides the morphological changes associated with age into 6 stages. In young adulthood, the pubic symphyseal face has a ‘billowed’ appearance and this is because it is essentially an unfused epiphysis. This stage is followed by the formation of the ‘ventral rampart’, which is a bony epiphysis that begins fusing on the ventral aspect of the symphyseal face. Following this, the pubic symphysis will have a complete and defined ‘rim’ around its margins and the surface will no longer be billowed. Gradually the surface and the rim will start to degenerate, showing signs of pitting and increasing irregularity in the margins. 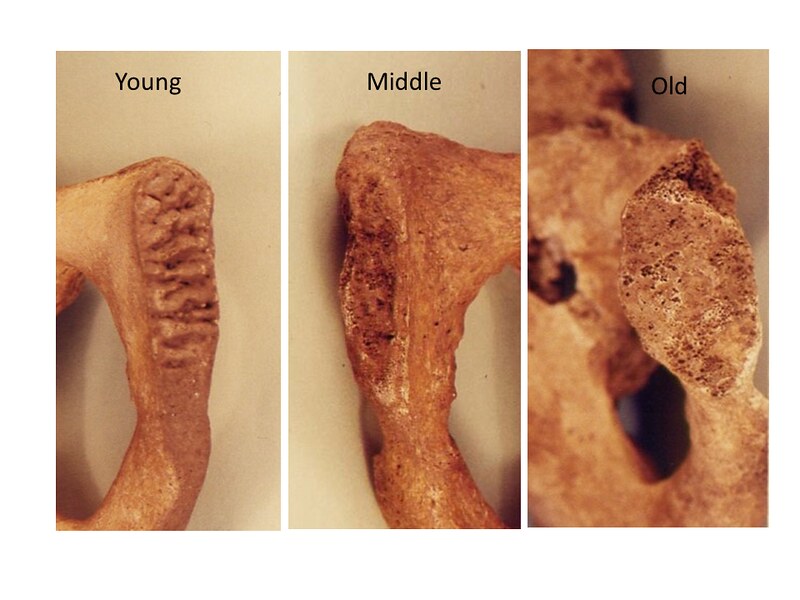 There are differences between males and females in the expression of these changes and thus different sets of casts have been produced for each sex. Overall, female pubic symphyses can be more problematic to age, because they are smaller and this region of the skeleton is affected by childbirth. Some authors have argued that the method is not reliable after the ventral rampart (rim) has fused between the ages of 30-40 years. Population differences have also been noted. Finally, in some contexts, the pubic symphysis may not survive well as it is a fragile part of the skeleton and if the body is lying in a supine position (on its back) it can be exposed to mechanical damage.

The auricular surface is located on the ilium and is the part of the pelvis that articulates with the sacrum (the lower part of the spine). Lovejoy and colleagues (1985b) identified several subtle, age-related morphological changes to the surface of the auricular surface that show regular changes with age. They devised an eight-phase system to characterise these changes. These phases are mostly in five-year increments and this suggests a level of accuracy that simply cannot be delivered by skeletal age estimation methods. Nevertheless, the method may be useful for assigning individuals to the broad young, middle and old adult age categories described earlier.

Similar to the pubic symphysis, the morphological changes to the auricular surface relate to alterations in the surface texture and appearance, together with changes to the margins of the joint. In young adults, the auricular surface appears fine-grained and includes ‘billows’ and ‘striations’. The ‘billow’s described in this method are somewhat confusing, because they are not nearly as pronounced as in the pubic symphyseal method. They are best characterised as ‘striations’. 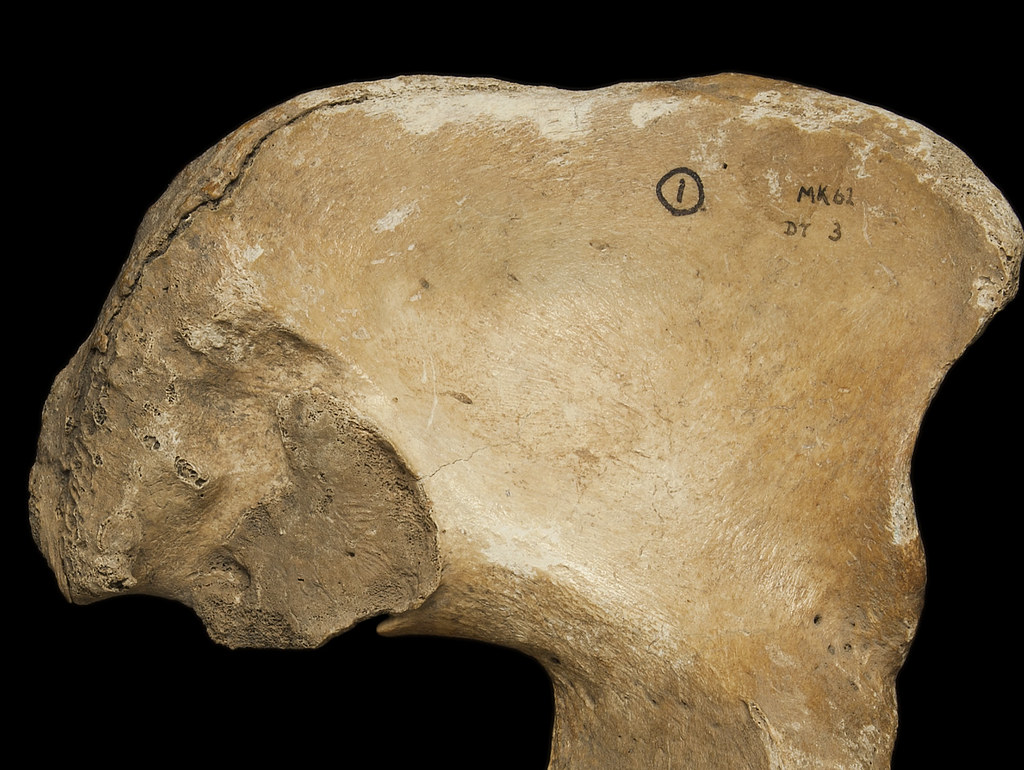 A young adult auricular surface. A fine-grained surface with lots of pronounced striae.

As the individual enters their late-twenties and thirties, the striations gradually diminish and the surface texture becomes more coarsely grained (think in terms of a shift from fine-grained sandpaper to coarse-grained sandpaper as illustrated in the image below). 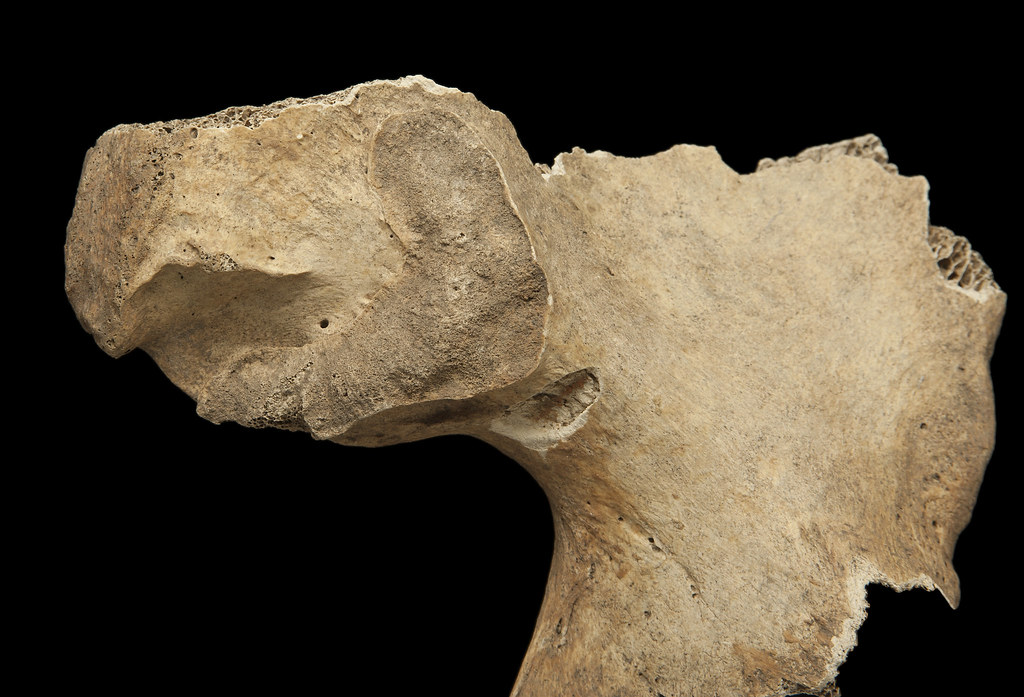 At this stage, some microporosity (small holes) will appear. Gradually small dense patches start to appear in the surface and these may be accompanied by slightly larger-sized holes (macroporosity). 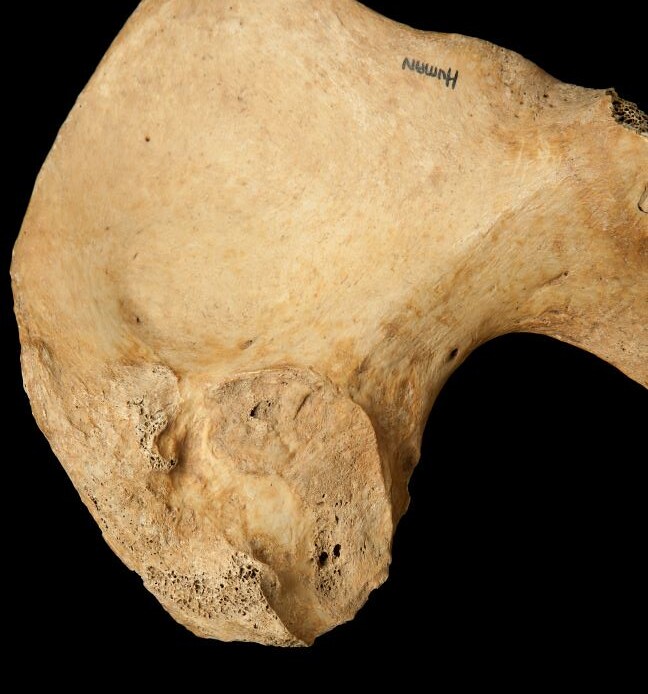 A middle adult auricular surface with some patches of density and increased porosity.

With advancing age, the surface becomes increasingly dense and the topography is very irregular and may still have areas of macroporosity. 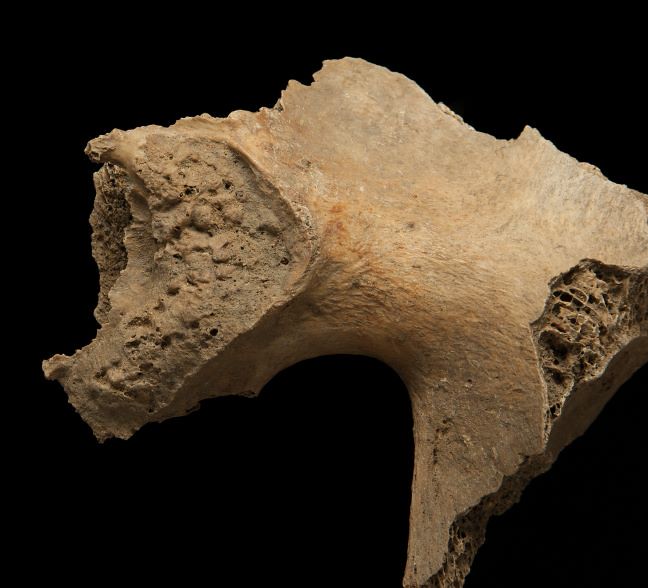 In addition to the surface changes, the method discusses bony changes to the margins and in particular at the ‘apex’ of the auricular surface. The authors also discuss age-related bone changes to the ‘retro-auricular’ area, but these tend to be even more difficult to interpret and I would recommend focusing on the surface itself.

The auricular surface method is not as popular among many osteologists as the pubic symphysis, because the morphological changes are more subtle and difficult to interpret. The descriptions provided in the publications are also not clear and this increases the likelihood of inter-observer error. However, I find the method to be useful for helping identify those individuals in the 50+ category as the changes in older age are quite distinctive. In addition, the degree of sexual dimorphism is less marked here than in the pubic symphysis. Finally, and most importantly, the auricular surface tends to survive better in the burial context than the pubic symphysis.

Turn your morphological observations into an age

Once you have assigned your auricular surface and pubic symphysis into a particular phase according to the methods outlined above, you then need to convert this into an age. There are a number of approaches to this. You can simply see what age estimate you get from each indicator, hope that they broadly match and then assign it into a standardised category. Use the table below to help you do this. 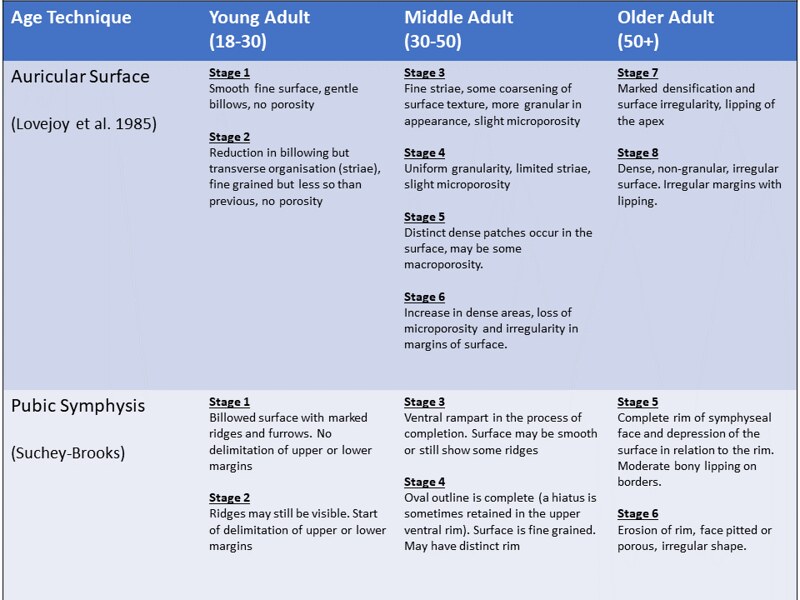 Summary table of skeletal changes associated with the auricular surface and pubic symphysis.

Another approach is to use the following ‘Look Up Tables produced by Richard Samworth a Professor of Applied Statistics at Cambridge and Rebecca Gowland (2007). These tables were derived from observations of the auricular surface and pubic symphysis in skeletal populations for which age was known. The full text of the paper is available here

You can practice identifying the age-related changes to the pubic symphysis by looking at the three 3D models provided in the ‘SEE ALSO’ section below this article.

Learn about some other important methods for estimating age-at-death in adults in the next step. Then test your knowledge in the following discussion step, where you will be asked to assess the age-at-death of an individual based on the os coxae.