This content is taken from the Durham University's online course, Forensic Archaeology and Anthropology. Join the course to learn more.
View course
3.9 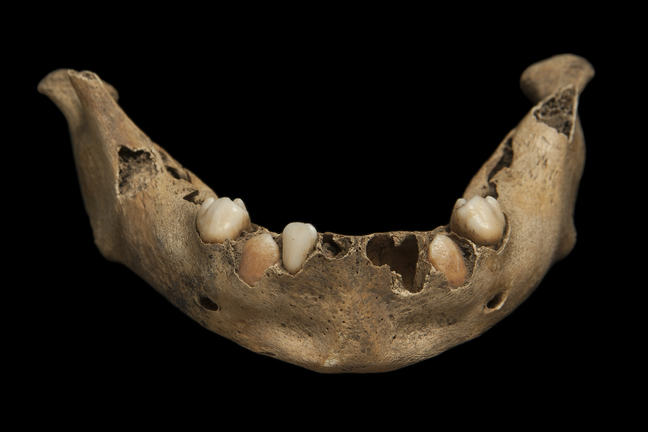 Mandible of a non-adult demonstrating the eruption of baby teeth

Age-at-death estimation of infants and juveniles

Techniques available for estimating the age-at-death of infant, juvenile and adult skeletal remains, include radiographic, histological and macroscopic methods. The majority of practitioners use macroscopic methods for estimating age-at-death from skeletal remains. This is because they are non-destructive and generally as reliable as the other techniques.

During growth and maturation, there are a variety of skeletal and dental indicators that can be used to estimate age at death. These include:

There are 20 deciduous teeth in total. These all erupt by 2 years of age and are shed by 12 years of age. The deciduous, or baby teeth, start to erupt from approximately 6 months of age; however, the teeth begin to form in utero, so that by birth the crowns of the front teeth are approximately 60% formed and the cusps of the molars have developed.

The mandible of an infant aged at around the time of birth with several developing tooth crowns.

These four mandibulae show the development of the dentition over time, from an infant (far left) to an adult (far right).

Tooth formation is the most accurate and reliable method of age estimation because dental development is reasonable well correlated with chronological age and only minimally influenced by environmental factors (e.g. disease and malnutrition). Tooth formation begins at the cusps of the tooth crown and ends with the closure of the root apex. The method most commonly used for recording the stage of tooth development is the AlQahtani 2010 method , which is based upon the data collected and method devised by Moorees and colleagues in 1963.

It is important to gain a good understanding of tooth morphology in order to correctly identify each of the deciduous and permanent teeth at the different stages of development. It is common for teeth to fall out of the sockets in the burial environment (particularly in fetal and infant individuals), therefore, relying on position within the dental arcade for identification is not always an option.

Due to the relatively close correlation between dental development and age-at-death, it is recommended that dental age be used in preference to age estimated from other skeletal indicators.

Three femora from non-adults of different ages with the youngest at the top. You could measure diaphyseal length from any of these femora to generate an age-at-death estimate, as the epiphyses (ends of the bone) have yet to fuse onto either end.

Long bone growth (measured as diaphyseal length) is useful for estimating the age-at-death of infants and young children when growth is very rapid. The long bones begin to ossify (transition from cartilage to bone) in utero, between the eighth and twelfth gestational weeks. Diaphyseal growth continues to be rapid during the first year, but the rate of growth then declines. There are often temporary increases or spurts in growth rate during childhood, followed by a more pronounced acceleration in growth rate during puberty.

Growth is not linear and instead occurs in a series of growth spurts followed by periods of stasis. In infant and juvenile skeletal remains, we do not know if the individual died during a period of stasis or just after a growth spurt. This missing information is a source of inaccuracy. Upon reaching puberty, there is an increasing divergence between the sexes and unless we can ascertain the sex of the skeleton, this will cause further imprecision in the age estimates.

Long bone growth varies within and between population groups. Differences arise due to variation in environment, gene pool, and cultural differences. Unlike dental development, genetic components in long bone growth may have a secondary influence in the presence of severe environmental conditions (e.g. malnutrition, illness).

The method becomes less accurate with increasing age due to differences in growth between individuals and between boys and girls given that sex estimation of children is often not possible.

Appearance and Fusion of Ossification Centres

The adult skeleton generally consists of 206 bones, but during childhood, the number of bones is considerably greater. This is due to the way in which our bones develop and grow during childhood. Many bones begin as separate ‘centres of ossification’ or small bones developing from cartilage. These centres of ossification then fuse to other bones at different stages of development, eventually forming the 206 complete bones we see in adult individuals. For example, the femur of an 8-year old child consists of 5 separate bones (the diaphysis - or shaft, the head of the femur, the greater and lesser trochanters and the distal epiphysis).

Epiphyses are secondary ossification centres and are usually located at the ends of bones. This allows for long bones, such as the femur, to grow. When epiphyses, such as the head of the femur and the distal epiphysis (at the knee) have fused onto the diaphysis, this means that growth has stopped and skeletal maturity is being reached. Because the appearance and fusion of ossification centres occurs throughout the growth period, they can be used as indicators of age-at-death. However, once a bone is mature and all ossification centres have completely fused, the method can only generate a minimum age estimate.

This array shows separate ossification centres of the thoracic vertebrae and how they develop over childhood, from a young child on the left to a fully mature individual on the right.

It is important to keep in mind that the epiphyses themselves grow and change over the course of development. Although it can be easy to identify a separated epiphysis in an adolescent, during infancy and early childhood, the epiphyses can be difficult to recognise. This makes the careful excavation of non-adults by a forensic anthropologist or osteologist critically important. Epiphyses can take on the appearance of the surrounding soil, often resembling clumps of dirt or small stones. Looking in key locations at the ends of bones can help you to identify an epiphysis.

A series of distal femoral epiphyses (knee) from very young when they’re just forming, until just prior to fusion. Note that the shape of the younger epiphyses are much less distinctive than the older ones 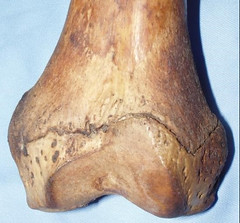 To look at the mandible from the image at the top of the screen in more detail, click on the 3D model in the ‘SEE ALSO’ section below this article.