This content is taken from the Cardiff University's online course, The Challenge of Global Water Security. Join the course to learn more.
View course
3.4

How bad can it get?

In this step we continue our discussions on freshwater ecosystems, and the risks to freshwater organisms and ecosystems around the world.

Here are a number of graphs that illustrate their state globally. 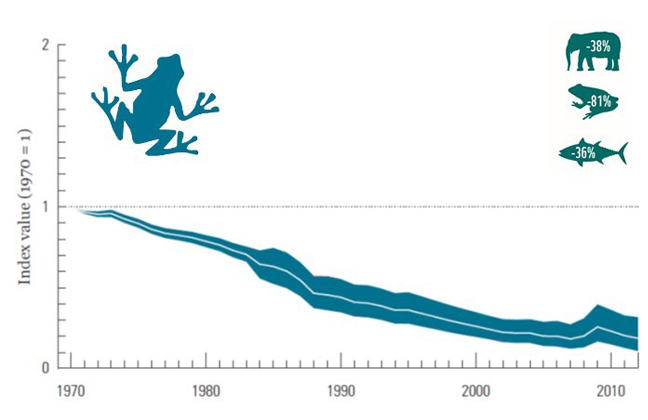 This graph shows the causes of this decline (INNS = Invasive Non-Native Species).

These statistics on the state of freshwater ecosystems are alarming and should be considered alongside the inevitable growth in the exploitation of Earth’s water resources. If unchecked by disaster, human populations look set to expand by around 80 million per year for the next 30-40 years at rates that are largest in Asia and fastest in Africa.

Without rapid growth in water resource infrastructure to support

over four billion people risk having insufficient water for food production. A billion will live in cities with perennial water scarcity, and three billion people will lack basic sanitation.

More abstraction means less water for the dilution of pollutants, further impairment and increasing impacts on freshwater ecosystems. These problems are also arising in a world of increasing climatic uncertainty, in which freshwater ecosystems are among the most sensitive to changing temperature, precipitation and associated stressors.

There are major concerns, then, not just for the conservation of freshwater organisms, but for freshwater ecosystems and for billions of people who depend upon them for basic life support.

As an example, how does the UK fare?

Although the global picture looks bleak for freshwater ecosystems, there have been clear successes in preventing decline and even restoring some freshwaters where effective action has been taken.

In the 1980s, the UK’s urban rivers reached the end of decades of gross pollution from failing wastewater treatment and industrial discharge.

Yet, there is another story. Over two thirds of UK rivers fail to reach Good Ecological Status against the requirements of the EU Water Framework Directive – greater already than the European average and possibly even increasing.

These circumstances reflect potentially growing problems with so-called ‘diffuse’ pollution, particularly fine sediments, nutrients from fertilisers, and some pesticides from intensifying agriculture. In urban areas, too, problems continue with Combined Sewer Overflows, where untreated sewage is mixed with surface drainage and released directly to rivers.

Over 50% of the UK’s total river length of 389,000 km has been physically modified, affecting the habitat of organisms.

The simplest summary of the overall ecological trajectory of British rivers is that urban conditions are improving, but still impaired, while many rural rivers are now degrading.

The search for solutions

In the face of risks to freshwater organisms and ecosystems around the world, what can be done?

Solutions depend, firstly, on effective monitoring and assessment of the freshwater environment – which is otherwise hidden from view: we need to know the state and trajectory of freshwater ecosystems.

Emphasising the protection of these systems in the protected area network is also important – ideally encompassing freshwaters, riparian zones and their wider catchments. Acting to build the protection of rivers, ponds and lakes into climate change adaptation will contribute.

Ensuring the enforcement of legal controls that protect freshwaters is important, but social, political and economic measures that fund the protection and management of river catchments offer a non-regulatory route.

Such economic measures depend on illustrating the value of freshwater ecosystem services to people, while exposing also the true costs of inappropriate decisions that degrade freshwater ecosystems. And alongside all of these measures, ensuring good governance that supports the needs of people and ecosystems is pivotal. All these themes are explored elsewhere in the course.

In the next step we will have a discussion around freshwater ecosystems in your area.