This content is taken from the The University of Melbourne , The Nossal Institute for Global Health & UNICEF's online course, Health Systems Strengthening. Join the course to learn more.
View course
3.8 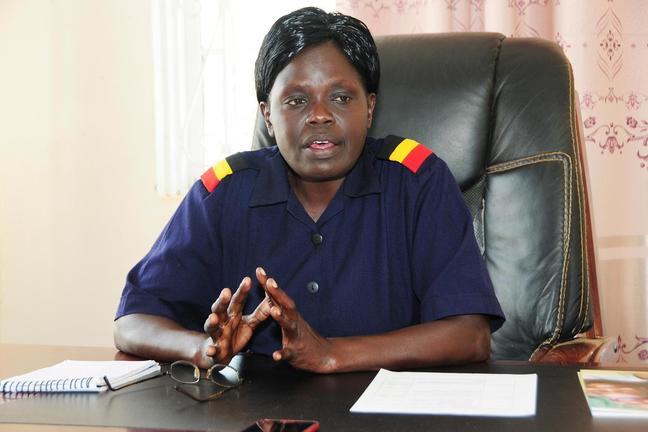 In the previous steps we identified some of the challenges that District Health Systems (DHS) face in providing flexibility and responsiveness to the health needs and demands of their populations. A key factor in determining the ability of the DHS to be flexible and responsive is the extent of decision-making authority or ‘decision space’ given to a District Health System.

What is decision space?

Decision space is a concept put forward by Tom Bossert (Bossert, 1998). He describes it as having three elements:

Decision making power in each health system rests with certain people or organisations; who has the power largely determines the structure of the health system. Is it the Ministry of Health, other national agencies (Civil Service Commission, Ministry of Finance), the local government, the district health service manager, the facility manager?

Decisions may cover a range of aspects of health system functioning, including:

With how much choice?

The level of choice allowed to decision makers is critical to their ability to effect change.

We can conceptualise decision space as a table like this 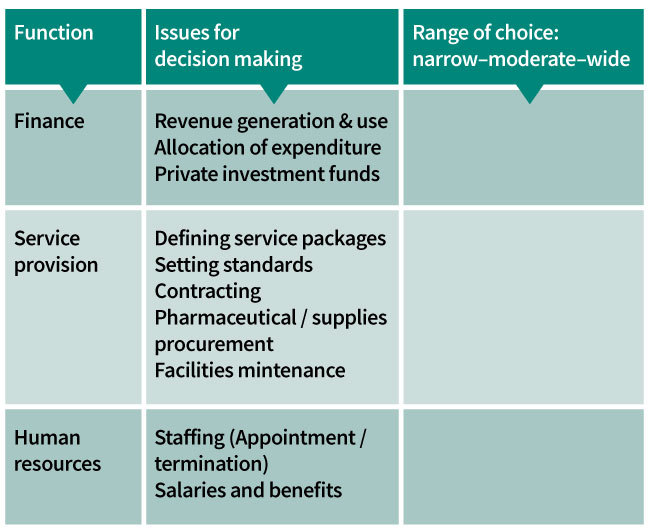 Increasing the level of autonomy and thus broadening the decision space of subnational levels of government or of government agencies is commonly referred to as decentralisation. It has become a very popular reform which aims to improve the accountability of subnational agencies and governments to the populations they serve; and to improve the efficiency, responsiveness and appropriateness of the services provided.

There are two main types of decentralisation:

Deconcentration – where increased authority for decisions is transferred to the regional or subnational branches/offices within a given government department or agency. This is the right hand side of the diagram below 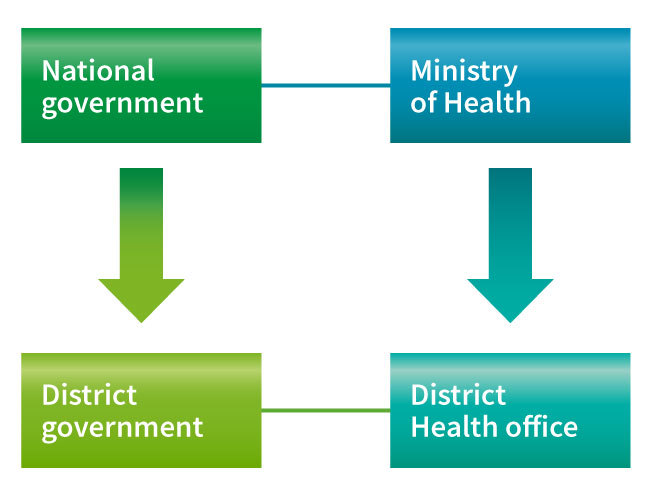 What is the impact of decentralisation on health?

The impact on performance depends on many other factors in the context, including the capacity of the region/institution in management, the resources available, and the extent of decision space that is available in practice – which may depend on the local politics, relationship with local political leaders, or with national leaders.

Accountability is a key theme in decentralisation – often the process is initiated to increase accountability of local health services to their local community or government – but national governments and Ministries of Health may still be held politically accountable for health system performance, and often seek to retain various means of keeping subnational health systems accountable for their performance.

Thinking about the context of a country that you are familiar with,

(a) management of human resources;

(c) collecting or using finances. For each decision area, categorise the decision space as wide, moderate or narrow/limited.

(2) Has this country introduced any policy or strategy to increase decision space at district or subnational level? If so, is the approach deconcentration or devolution? Do you think it has impacted on decision space or performance?