This content is taken from the University of York's online course, Poetry: How to Read a Poem. Join the course to learn more.
View course
3.17 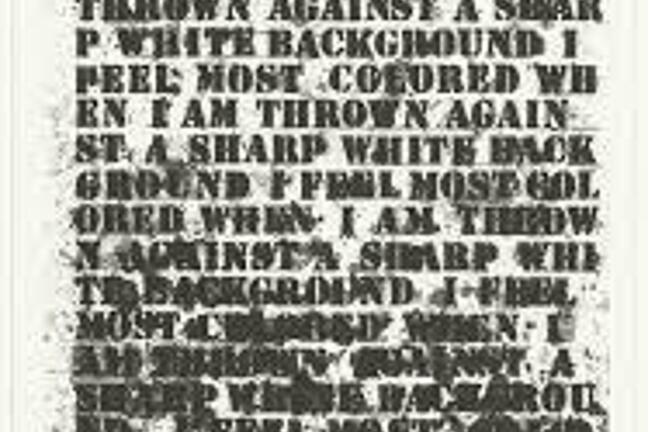 Exploring a poem and its images - intermediality

One of the most exciting instances of a contemporary poet engaging with art is to be found in the multi-decade-multiple-book-length poetry-and-essay project called An American Lyric, which chronicles contemporary American life. The first instalment Don’t Let Me Be Lonely was published in 2004, but I’m going to spend this article thinking about how the second instalment, Citizen, published in 2014, incorporates and reflects upon images.

As the project’s overarching title tell us, Citizen is an example of lyric form. In many ways, ekphrasis is naturally suited to lyric, as the lyric is all about subjective experience. The questions I mentioned in my previous video—about who gets to speak and why—map relatively seamlessly onto the questions at the root of lyric. The lyric is generally written from the perspective of the first person, to the second person: from an “I” to a “you”. This is what we call poetic address.

We see this mode of poetic address in Rankine’s Citizen. Here are the opening lines:

When you are alone and too tired even to turn on any of your devices, you let

yourself linger in a past stacked among your pillows. Usually you are nestled under

blankets and the house is empty. Sometimes the moon is missing and beyond the

But who is the “you” Rankine speaks to in Citizen? In the plural, “you” becomes a by-word for citizenry, for collectivity. But, “you” is tricky—it could mean you singular, a grammatical way of marking difference—as in “Hey! You there!” or “What are you looking at?”

Further down the page, we get more information about who “you” may be: “You never really speak except for the time she makes her request and later when she tells you you smell good and have features more like a white person.” Rankine’s speaker is both reflecting on herself, using the second person, and finding a voice that expresses the collective experience of Black women in America.

With Citizen, Rankine takes a Romantic poetic form and uses it to account for racial microaggressions in contemporary American life on a deeply personal level.

This is also where Rankine’s joy in images comes in. Citizen not only describes works of art but includes images throughout its pages. These span photographs, paintings, and stills from videos. In this way, Citizen goes beyond traditional ekphrasis and becomes intermedial (a work of art that includes different media).

Let’s look at a couple of examples. Near the centre of the book, is a double-page spread reproduction of Glenn Ligon’s Untitled (1992), one of the famous artist’s etchings which reflect on his experience as a Black man in America ((also visible at the head of this article)

Immediately before we see Ligon’s artwork, the poem says: “The real estate woman, who didn’t fathom she could have made an appointment to show her house to you, spends much of the walk-through telling your friend, repeatedly, how comfortable she feels around her.” Rankine’s lyric chimes with Ligon’s etching: ‘I feel most colored when I am thrown against a sharp white background’. In Ligon’s etching, the black of the text stands out against the traditionally white walls of the gallery, reflecting on the exclusion of Black artists and viewers from the spaces of culture. In Rankine’s poem, that whiteness is reimagined both as the casual racism of the estate agent, assuming she is here to sell a house to Rankine’s white friend, and, perhaps, as the gleaming white walls of a contemporary home.

We see this chiming happening again in the final lines of Citizen. Here, the poem alludes to the micro-aggressions thrown at Serena Williams in the early 2010s:

The sunrise is slow and cloudy, dragging the light in, but barely.

Did you win? he asks.

Citizen’s final images on the page following are J. M. W. Turner’s Slave Ship (1840; Figure 2), and a detail from the painting of fish attacking an enslaved person thrown overboard. At first, the painting seems simply to evoke the low sun and heavy cloud described by the poem, but researching the artwork reminds us that the “lessons” of slavery still need to be learned.

In 1963, poet Langston Hughes positioned the lyric as a peculiarly Black American form, because of the way the lyric negotiates the “I”, the “you”, and modes of feeling. He wrote: “Traditionally, poets are lyric historians.” (11). By composing a lyric that moves freely and creatively between image and text, Rankine has captured—both visually and grammatically—a crucial, intermedial picture of subjective experience now, but that will become history.

Can you think of any other instances of intermedial poems or texts?