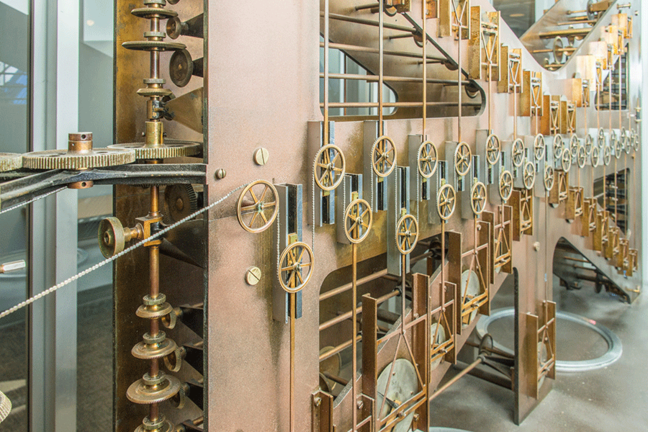 Qubits carry information in superposition and entangled states, which gives them capabilities that analog systems do not have.

We can build computers using continuous variables, giving us an analog computer. Analog classical computers were built up through the 1960s, and researchers such as Caltech’s Carver Mead continued working on them using VLSI in the 1980s. They can be mechanical or electrical systems, or a combination of the two. (I (Van Meter) actually took a class from Carver Mead on analog VLSI in that era, at Caltech; I learned a tremendous amount about both the technology and what it means to be a researcher, but I flunked the class!)

Analog computers work well on certain kinds of differential equations, performing integration and differentiation directly, making them useful for tasks such as predicting the tides. Some current-day researchers believe we will ultimately move back to such analog systems for many computational tasks that today are done digitally.

A common question that comes up when beginners (especially if they are experienced computer people) learn about the phase of qubits and the fact that they can be “partly” in the zero state and “partly” in the one state is, “Doesn’t that just mean that qubits are analog? We’ve been building analog computers for a long time…”

We have already talked about superposition of quantum states, so at first glance it might seem that superposition is the key. But, in fact, an analog system can also carry signals with multiple frequencies at the same time, so superposition alone is not the answer.

Two factors distinguish quantum bits from classical analog data: measurement collapse and entanglement. We saw just a few Steps ago that a qubit, when measured, always collapses into either 0 or 1, with a probability based on the square of the size of the quantum amplitudes. This may seem to be a dubious feature, or even negative, given that it allows us to only extract a single bit out of the state. In an analog computer, in contrast, with appropriately sensitive measuring devices we could directly measure the amount of zero and one, and even the phase. Isn’t that more information?

In a sense, the collapse of the qubit does destroy some information about the superposition of the state. However, once we have learned how to make good quantum algorithms, that collapse also helps us, by taking away parts of the superposition that we didn’t want. This effect will be seen very clearly in Shor’s algorithm for factoring large numbers, in particular.

That’s still only half of the answer, however. Entanglement is a key feature of quantum systems in which two (or more) parts of the system show a type of correlation that cannot occur in classical systems. This entanglement, among other things, helps us keep separate terms of the superposition of multi-qubit systems in a way that a classical analog computer cannot.

In the next Activity, we will learn much more about entanglement.