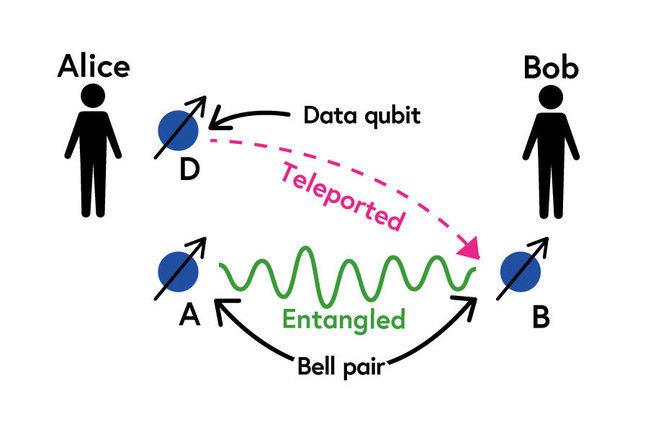 One of the most important uses of entanglement is quantum teleportation. In teleportation, the state of one qubit is destroyed in one place and resurrected in another, accomplished by using entanglement. Teleportation is a fundamental primitive in quantum networking, and in executing certain types of quantum computing.

Moving quantum states from one place to another is difficult: if we want to go any long distance, we want to use photons (light), which are pretty good at keeping a quantum state intact, but have the habit of getting lost along the way. Back in 1993, Bennett, Brassard, Crepeau, Jozsa, Peres and Wootters realized that it’s possible use two qubits entangled into a Bell pair as a tool for moving a qubit from one place to another.

To begin, create a Bell pair shared between two people, always called Alice and Bob in quantum discussions. Doing this over a distance using photons is hard, but has been done in many laboratories around the world. In the figure at the top of this Article, the entanglement is represented by the squiggly green line between the qubits A and B, but of course there’s nothing to see – that’s just to show you which two qubits are entangled.

Alice also creates (or receives from someone else) the qubit she wishes to teleport to Bob, marked D in the figure. (If the procedure for creating Alice’s data qubit is easy, it might be easier to just send the recipe to Bob; we are assuming here that the procedure is complicated, or the qubit is only part of a large quantum state, or that Alice was asked to relay the qubit for someone else.)

Next, Alice measures her two qubits (D and A) together, in a special way known as Bell state analysis. This measurement destroys the entanglement in the Bell pair, and also forces the collapse of any superposition in the data qubit. It leaves Bob’s half of the Bell pair in an ambiguous state.

This Bell state analysis gives Alice two classical bits of information. One of those classical bits tells Alice the parity of A and D: if they are both 0 or both 1, then the parity is even; if one of them is 0 and the other is 1, the parity is odd. Similarly, The other classical bit tells her the relative phase: is their phase the same or opposite?

If Alice sends these two classical bits to Bob, he can use those to turn his qubit into the state of the original qubit, “resurrecting” an apparently dead qubit. The two bits serve as corrections to the qubit; the first one tells Bob if he should flip the value of the qubit, the other tells him if he should flip the phase of the qubit. After he applies these corrections, the data has been teleported from Alice to Bob!

We saw in an earlier video Step that the entanglement behaves like there is some communication between the qubits over a distance, but it can’t be used to transmit data faster than the speed of light. The need for the transmission of the classical data and its use in order to recreate the data qubit is why this is so. If Bob measures the qubit without waiting for the data from Alice, he will get only random numbers that are of no use. It is only once the bits arrive, and tell him how to interpret that data – almost like an encryption key – that his data becomes useful.

Note that teleportation destroys the entanglement in the Bell pair, so if we want to repeat the teleportation operation (which we almost certainly do), we will need to invest a lot of effort in creating a stream of Bell pairs.

Teleportation will be the foundation of wide-area quantum networking. It is also used to execute gates in a fashion known as “gate teleportation”, and serves as the first key to a specialized type of quantum computing called “measurement-based quantum computation”, which operates on entangled states consisting of many qubits. In this course, we won’t have any further need for teleportation, but its importance can’t be overstated.