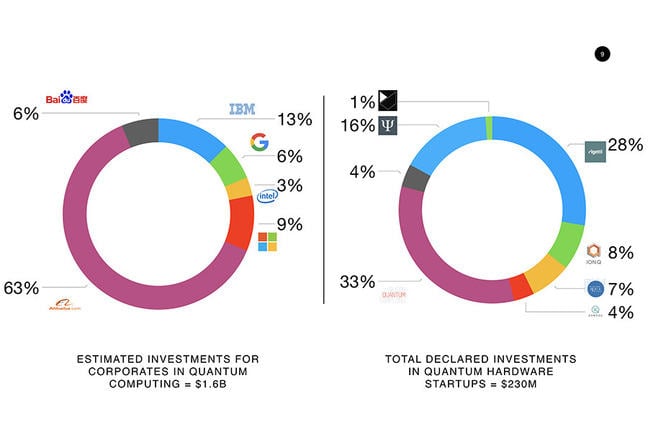 Numerous companies, many of them new startups, are investing heavily in the field. Percentages are investment in the labeled company relative to the total below. (image courtesy of Simon Devitt).

Ambitious visionaries created the first startup companies in the fields of quantum computing and quantum networking in 1999. The community grew slowly at first, but since 2013 there has been an explosion of activity. The excitement for startups is so widespread that, as of March 2018, one report lists more than seventy-five companies, many of them founded within the last two years. Obviously it’s impossible for us to review seventy-five companies, but we want to give you an idea of the range of work under way in this vibrant field.

For an enlarged version of the graph above, click here.

The best known startup in the field is inarguably D-Wave, founded by Geordie Rose in 1999 in Vancouver. At the time, the fidelity and memory lifetime of superconducting qubits was poor, and various designs for coupling between superconducting qubits were just beginning to emerge. Gate-based, error-corrected systems remained far off. D-Wave chose to create adiabatic quantum computing systems, which operate on very different principles than those we have discussed in this course. The adiabatic model does not run Grover’s algorithm and Shor’s algorithm, but is instead focused on solving optimization problems that can be rewritten as a certain kind of graph problem. Their systems began with four qubits, but have grown to over a thousand as they have solved problems with manufacturing, the on-chip circuits necessary to control the qubits, and such seemingly mundane but critical issues as shielding the system from stray electrical and magnetic fields and keeping the device at nearly absolute zero temperature. We will discuss adiabatic systems a little more in one of the final articles in this course.

For a long time, D-Wave was the only startup company daring to try to deliver a complete computing system to customers, but a number of other small companies supplied researchers with the equipment and services they need. For example, Oxford Instruments builds dilution refrigerators that use two isotopes of helium to create near-absolute zero temperatures, useful for both superconducting and quantum dot experiments. Cold Atom provides vacuum chambers suitable for ion trap experiments, and Advanced Quantum Technologies provides various forms of engineering support for building prototypes.

Over the last several years, researchers have begun to step out of their laboratories and create companies with the stated goal of delivering complete quantum computing systems to customers. In 2013, Chad Rigetti founded Rigetti Computing, which is building a superconducting system. Quantum Circuits, Inc. founded in 2015 by scientists from Yale University, is also working on superconducting systems of a somewhat different sort, and providing ancillary components along the way. Recently, our collaborator Jungsang Kim and his partner Chris Monroe have formed IonQ, which plans to deliver several ion traps optically connected to share entanglement, creating a more scalable system. Silicon Quantum Computing, in Australia, is working to emded a different type of atom into a silicon substrate, building on ideas that go back to the first proposed physical implementations. Other embryonic companies include Psi Quantum and Xanadu, both working toward optical quantum computers, and Turing, Inc., focusing on NV diamond. In total, more than fifteen startup companies, in addition to the big companies previously discussed, are working to build systems.

Of course, hardware is of little use without matching software, but programming systems that don’t yet exist requires a certain level of imagination. The startup companies Cambridge Quantum Computing Limited, QxBranch, 1QBit and QCWare are vying to accomplish this.

Some of these companies, rather than software packages, are providing software services. For a fee, they help companies determine which of their computationally intensive problems are suitable for solving using quantum computers, and if possible map some of them to run on the D-Wave machine or, in the short term, simulators of quantum computers in preparation for the advent of large machines. At least a half dozen consultancies have been founded, as well. At least three of these companies have been founded here in Japan: QuaNaSys, MDR, and Tokyo Quantum Computing.

One prominent software startup is Zapata Computing, which grew out of the laboratory of Alan Aspuru-Guzik, who was previously at Harvard University and is now at the University of Toronto. This is the laboratory where James Whitfield, who explained quantum chemistry to us back in Steps 1.9 and 3.21, conducted his Ph.D. research.

In this course, we have not discussed quantum networking, but when talking about startup companies we would be remiss in not acknowledging the pioneering role played by quantum key distribution companies.

In 1999, MagiQ Technologies was founded in New York. Two years later, id Quantique was founded in Geneva. After a lull of some years, they have recently been joined by Qubitekk, Quintessence Labs, and SeQureNet.

Besides the challenge of maintaining a high-fidelity quantum photonic state (whether polarization or time bin) over a long distance and detecting individual photons, these companies have been at the forefront in integrating their technology into large classical computing and network systems.

Researchers in China have conducted some of the most successful quantum entanglement experiments, using a satellite as well as terrestrial fiber. The startups Qasky and QuantumCTek have both spun out of this effort.