This content is taken from the University of York's online course, Modern Sculpture: An Introduction to Art History. Join the course to learn more.
View course
2.4 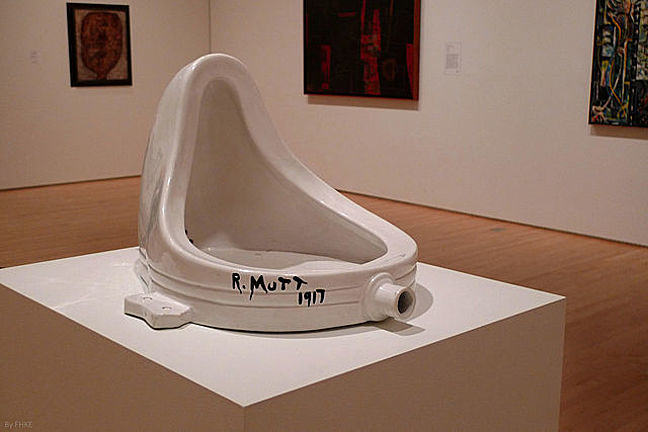 In 1917, the same year that Rodin died another French artist, living in New York City, decided to make a submission to an art exhibition organised by the newly-formed Society of Independent Artists.

That submission, made by a person only identified as ‘R. Mutt’, was rejected by the organisers as a grotesque and indecent joke. The piece was a sculpture and because of the controversy that R. Mutt inspired, consequently, the medium found itself at the centre of one of the most revolutionary art-historical debates of the twentieth century: what exactly counts as a work of ‘art’?

This moment is important to us because it shows how sculpture can be used in theoretical and conceptual debates.

R. Mutt was, in fact, the twenty-eight-year-old artist, Marcel Duchamp (1887-1968). A relatively unknown artist, he had moved to New York to escape the traditional art world of Paris; New York was on the rise as the new centre for avant-garde artists. His controversial submission was a commercially-made porcelain urinal which he ordered from a catalogue, sat upside down and titled Fountain. According to the organisers, who themselves were artists, a urinal could not be considered a piece of legitimate art. After Duchamp revealed himself as the instigator, he countered that, as an artist, he had the power to name anything as art. He used the term readymade to describe commercially manufactured objects that he selected as works of art.

The theory behind the readymade was explained in an anonymous editorial published in the May 1917 issue of avant-garde magazine The Blind Man run by Duchamp and two friends:

According to Tate’s art dictionary: