This time-lapse video shows a foggy morning in Exminster, Devon, looking towards the river Exe. As the morning progresses, the fog gradually lifts and clears from Exminster, though persists long afterwards through the Exe valley, where the cold air has pooled overnight. Eventually, it clears the river valley too.

Earlier in the course, we learned about fronts. Let’s remind ourselves of the cloud structure associated with warm and cold fronts. 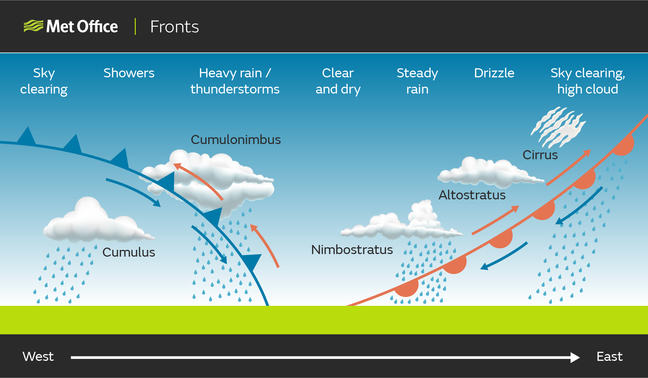 When a warm front is in the forecast, there are some potential pitfalls to bear in mind if planning a walk. As a warm front approaches, we first see high cloud spilling way ahead of the surface front, then medium cloud layers, which will gradually lower until low cloud arrives just ahead of the front. Rain is likely on the front itself, which is often heavier over hills, and especially slopes that face into the wind.

Following the front, we have the warm, moist air mass that we call the warm sector, and this can bring hazards of its own. Due to the moisture in a warm sector, there is likely to be extensive low cloud and drizzle, this cloud is often low enough to shroud hills, and this is what we call hill fog. 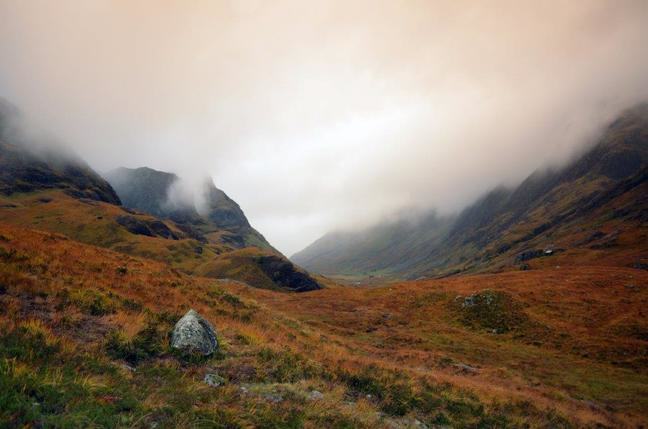 So, hill fog is cloud that has either formed as a result of the hill forcing air to rise, cool and condense into cloud, or it is merely cloud (perhaps frontal) that is low enough to cover hills. It can be sudden, and dense, and so potentially hazardous when hill walking if you are un-prepared, as it can cause you to lose your bearings, and can bring visibility down to just a few meters on occasions. 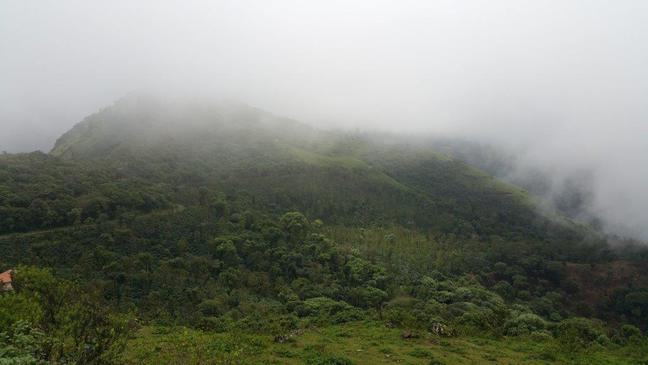 Conversely to hill fog, radiation fog is more likely to form in valleys. This is because cold air is more dense than warm air, so on a clear, calm, cold night, the cold air will fall down the hill sides into valley bottoms, known as katabatic drainage. If the temperature falls to the dew point of the air and it can’t hold any more moisture, the water in the cold air will start to condense and radiation fog may form. 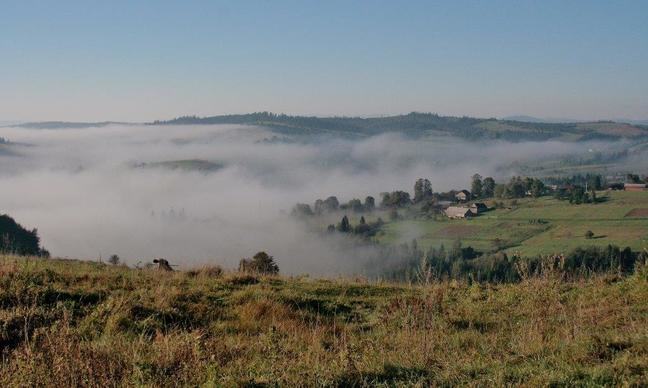 Coastal fog is a regular occurrence along the eastern coast of the UK.  In Eastern Scotland, it is known locally as Haar whilst in whilst in Eastern England it tends to be called Fret.

Coastal fog usually forms when relatively warm, moist air passes over a cool surface. In the UK, the most common occurrence of coastal fog is when warm air moves over the cool surface of the North Sea towards the east coast of the UK. When this happens, the cold air just above the sea surface cools the warm air above it until it can no longer hold its moisture and so forces the vapour to condense, forming tiny particles of liquid water which results in the fog that we see.

Coastal fog usually occurs in the spring and summer months when conditions begin to warm up but the sea (which warms more slowly) stays relatively cold.

Coastal fog might also refer to pre-existing fog which is transferred from a distant source and is simply moved to the coast by prevailing weather patterns.

The sudden onset of coastal fog can sometimes be dangerous causing disorientation as it dramatically reduces visibility. 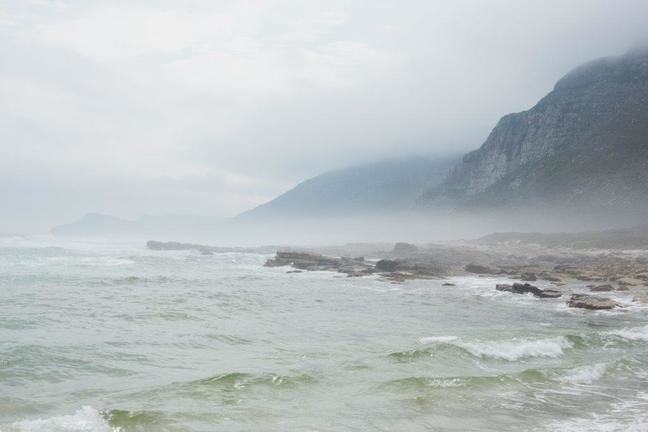 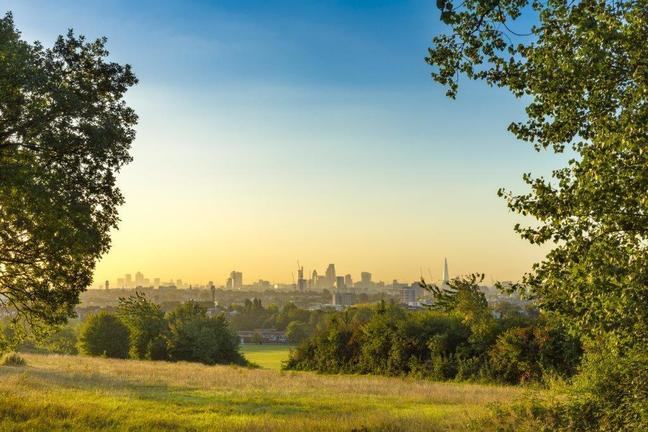 In the UK, showers are most common in a polar maritime air mass, and so when you hear in the forecast it’s a sunshine and showers day, you have a good idea that it’s going to be clear, good visibility air, though also be aware that the visibility will drop in and around showers, and especially if the shower is wintry, the reduction in visibility can be quite sudden. 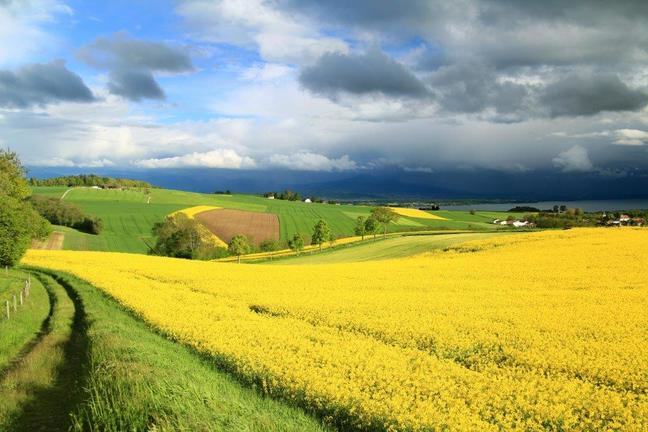 As high pressure tends to trap particulates and aerosols, this is when you need to be more aware of issues with haze, especially if the air is continental in origin.

Often, if fog has developed overnight it will burn away during the morning, but the time that fog clears will tend to be later closer to mid-winter. Fog can make for good photographs in certain circumstances, especially if you are able to get above the fog, more on this later. 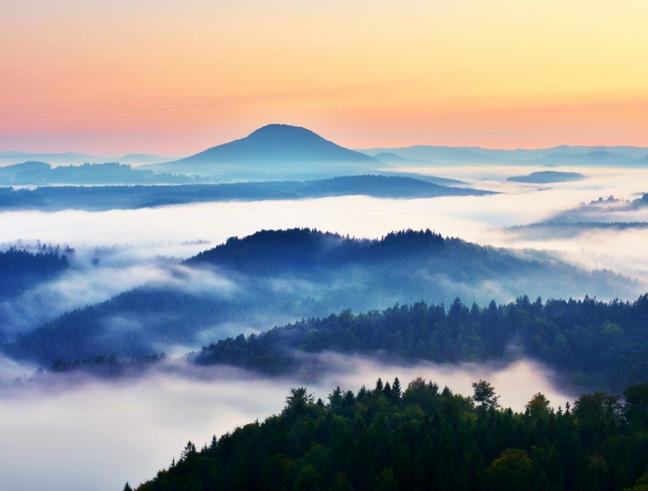 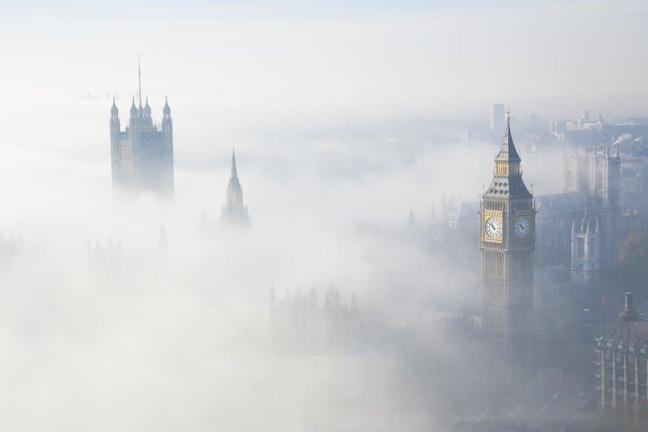 If you would like to find out more about fog you can read the Met Office article What is fog?

And for further information, you can have a listen to the special fog edition of our podcast Mostly Weather.