0:38Skip to 0 minutes and 38 seconds And then towards the end of the decade there were some real genuine successes in gene therapy for inherited eye diseases and then inherited Factor 9 deficiency, Haemophilia B, and also for some blood disease, blood related diseases as well. So at that point actually is that people started to realise that gene therapy was starting to deliver. Now the field that we were specifically working in was gene therapy in early childhood. So for the entire decade people had been looking at anybody working in gene therapy as if they were crazy. If you are talking about gene therapy in children that actually was frowned upon even more. So we really were working in the difficult end of gene therapy.

1:33Skip to 1 minute and 33 seconds But by the end of that first decade of the millennium gene therapy really had started to turn around. People were starting to believe that gene therapy was working and so in terms of childhood gene therapy people were starting to realise that maybe this was going to be, a growing concern, which made it a lot easier for us to do the work. But also meant actually that we would really have to start to deliver on these potentials of the technology. So the disease that we were working on was Neuropathic Gaucher Disease. The mice that we injected they were surviving from their normal lifespan has a knockout mouse of 14 days up to 6 months.

2:21Skip to 2 minutes and 21 seconds So there was a massive therapeutic effect that we saw from the use of gene therapy vectors. And the reason that we chose this model was because we knew that it was incredibly severe in mice. And that it was a good model of the human disease where the human babies would live for only 2 years and there was absolutely no cure for this disease. So when we first embarked upon these experiments people who were experts in the field told us, “there is no way that gene therapy is going to have any effect on these mice.” We proceeded with the treatment of these mice with the advanced vectors at the time.

3:02Skip to 3 minutes and 2 seconds So this would be when we started in 2009, injected some of these mice with the genetic disease at birth. And they then lived and looked normal for 6 months at least and were able to breed. So in other words we had converted a disease that was lethal at 14 days to one that would in fact would only start to show symptoms maybe at 6 months of age. And when we showed this to our colleagues and friends at Great Ormond Street and elsewhere they were stunned by the results that we were getting here. And this is exactly the affect that we wanted was to say, “look, gene therapy really, can make a difference to some of these really nasty diseases.”

3:49Skip to 3 minutes and 49 seconds You are in a situation where these are diseases that are fatal early in life. So the rational is that, why screen for diseases for which there is no cure? But then oppositely, why try to develop a cure for a disease that you can’t screen for? So we, have been trying to break that cycle by developing gene therapy strategies. And we and many other researchers across the globe are now showing that you can with a single injection of a gene therapy vector cure a disease in animal models that previously was completely untouchable by any other treatment. Spinal Muscular Atrophy, the mice die at 12 or 13 days of age, a single injection and they are living for a year.

4:43Skip to 4 minutes and 43 seconds This sort of thing was absolutely unheard of 7 years ago. So one of the technological aspects of gene therapy which sets it aside quite profoundly from other medicines, is that when you inject a gene therapy vector to deliver the DNA you are you’re delivering it to billions of cells in the body and once you’ve injected it you can’t get it back out again. Whereas if you are treating somebody with a drug you can actually just stop giving them the drug. If you perform a kidney transplant and there is a problem you can actually take the transplant out and maybe give them another transplant.

6:14Skip to 6 minutes and 14 seconds So we’ve got to cure it in one go. And that probably isn’t likely. What we are going to do is we are going to partially cure it. Which means that what we might be doing is converting a lethal disease at the age of 2 to one which results in 20 years of disability, physical and/or mental disability. And so that is an interesting ethical question is that, is this an acceptable outcome?

6:42Skip to 6 minutes and 42 seconds And obviously there are various different views upon this in terms of the impact on society the impact of course on that person’s well-being and health but also one might bear in mind the fact that what you might be doing is extending their life long enough for other technologies to come in and actually make a better shot at those treatments. But the other implication of not being able to take the gene therapy out is that if there are any unexpected side effects, you can’t do anything about them. You are stuck with those there.

7:17Skip to 7 minutes and 17 seconds So it isn’t just a case of not treating the disease well enough but also there might be unintended consequences and of course what we are doing here is that we are looking at essentially human experiments that are going to last for years and years and decades. And some of these patients will actually outlive the people that have developed the cure for them. So the implications of this ethically are, quite interesting.

What is gene therapy?

Gene therapy offers the possibility of correcting genetic errors. It is a technique that has already shown great potential. UCL is acknowledged as a leader in this exciting and dynamic field.

In this interview, we meet Dr Simon Waddington, who works at UCL’s Institute for Women’s Health, leading a team of scientists who use stem cell transfer to correct for diseases of early childhood. Simon explains the nature of the work he does and shows examples of what he and his team do at UCL.

Gene therapy can repair or replace parts of a specific gene sequence and therefore treat the defect that is causing the condition by providing a healthy copy of the faulty gene.

The steps of gene therapy (adenovirus) 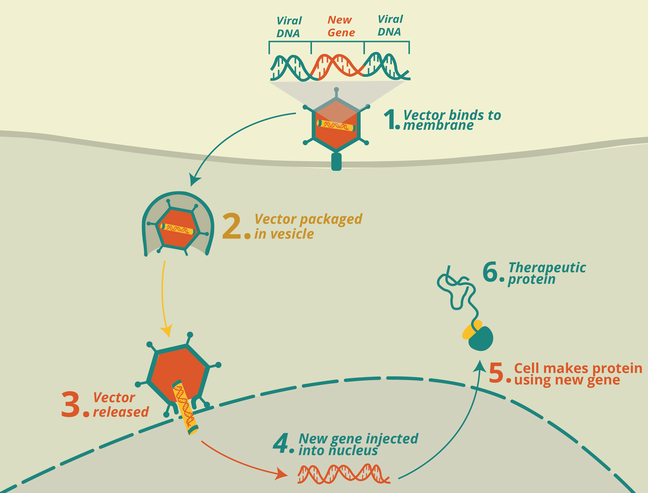 Unlike a lot of medicine that focuses on symptom-limitation, gene therapy offers something unique because it treats the underlying cause, the genetic defect.

The kinds of diseases that have been the target of gene therapy are heritable blood disorders such as haemophilia, certain types of cancer, and debilitating genetic disorders of childhood, like cystic fibrosis.

The promise of gene therapy is especially significant where current medical treatments are inadequate or unavailable.

There are several reasons why fetal or neonatal gene therapy can be advantageous. Prevention is better than a cure in conditions where irreversible organ damage has already begun when the baby is born.

Therefore if this condition is anticipated and treated with gene therapy before birth this can improve their prognosis and potentially prevent further disease related decline.

Gene therapy is more effective in fetuses and newborns as they have a smaller mass and have a large population of cells which can be targeted.

For your discussion: Assuming a sufficient level of safety was met, what do you think about the prospect of gene therapy? Is it something we should invest in for the future?