This content is taken from the European University Institute (EUI)'s online course, Migration and Cities. Join the course to learn more.
View course
1.10 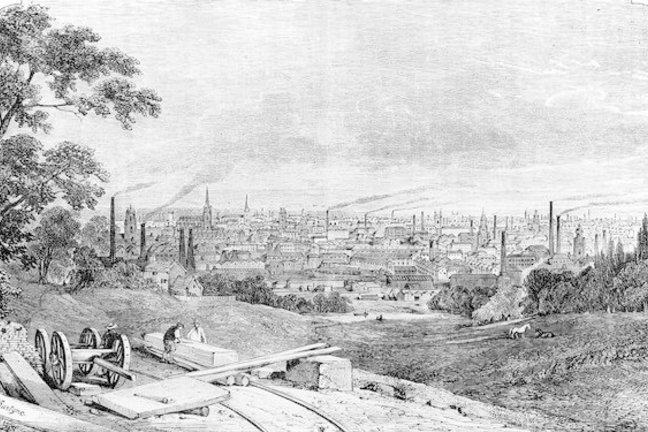 Migration and the birth of the industrial city: the example of Manchester, England

We now move to the nineteenth century to consider the rise of the modern industrial city. This could not have occurred without the contribution of mass migration that provided labour for the expansion of textile, mining, iron, manufacturing and other industries. Here we first look at the example of Manchester, in England.

During the course of the nineteenth century Manchester became Britain’s pre-eminent industrial metropolis and the textile capital of the world. Its population rose from 90,000 in 1800 to 700,000 in 1900. It was a city of sharp contrasts: grand warehouses and opulent civic buildings in the city centre that reflected the city’s accumulation of wealth, and abject poverty and squalor in the workers’ districts.

A substantial proportion of Manchester’s growing population consisted of migrants from other parts of Britain. According to E. G. Ravenstein, who published the highly influential paper on British industrial cities entitled ‘The Laws of Migration’ in 1885, the larger the town the greater the proportion of long-distance migrants. Indeed, while only 29% of heads of households in 1871 had been born in Manchester and 12% originated from surrounding counties, 32% were long-distance mainland migrants, coming from as far afield as Scotland and East Anglia.

In 1871 a further quarter of the city’s population hailed from Ireland. Throughout the century thousands of Irish migrants moved to Manchester due to the ready availability work in the mills and the city’s proximity to Liverpool, the main port of entry. Most were occupied in the least-skilled and worst paid jobs and lived in the worst dwellings such as cellars. The peak in arrivals occurred during the potato famine, a period of mass starvation during the late 1840s following the failure of Ireland’s staple crop, which triggered a mass exodus from the island. In 1847 alone, 300,000 Irish arrived in Liverpool: 130,000 subsequently set sail for North America, while 40,000 moved on to Manchester.

Manchester also possessed a sizeable number of foreign merchants who gravitated around the cotton trade, including Germans, Italians and even Egyptians, as well as numerous Jewish migrants who arrived from Central and Eastern Europe. One famous foreigner who was in Manchester during the early 1840s was the German radical philosopher Friedrich Engels, sent by his father to work in the family business. From research and observations conducted during his two-year stay Engels wrote The Condition of the Working Class in England (1845), a biting portrait of working and living conditions in the city. In it he dedicates a short chapter to the plight of Irish migrants and how their competition for the lowest-level jobs served to bring down wages.