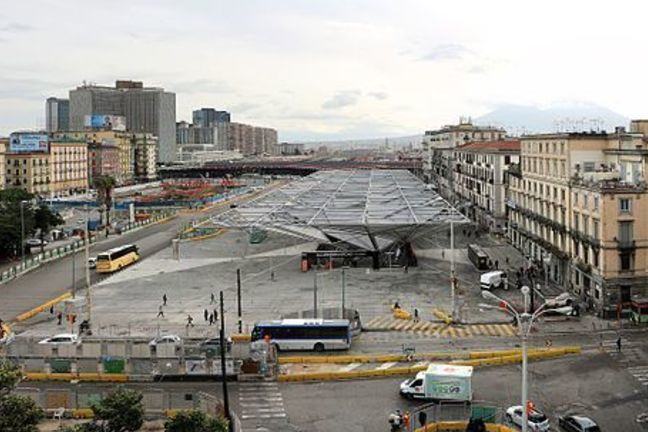 Migrants in front of the station

Railway station areas have typically been places where migrant groups have congregated and created their own public space. In A Seventh Man, an account of guest workers in northern European cities in the 1970s, author John Berger describes the station area as:

one of the few places where events occur and [migrant workers] can remain spectators, and at the same time outnumber the citizens. The constituents of leisure: the right to watch, and the capacity to be at ease with those of your own choosing.

Here we look at one such space: Piazza Garibaldi in front of the central railway station of Naples in southern Italy, where Nick Dines conducted ethnographic fieldwork in the early 2000s.

This immense space is the hub of the city’s rail and bus network. Its surrounding buildings house an assortment of electrical stores, hotels, bars and restaurants. Food and clothes markets occupy some of the piazza’s side streets, while its pavements are often lined with the stalls of Neapolitan and migrant street traders who sell a range of goods, from pirate DVDs to mobile phone cases.

Over the last four decades Piazza Garibaldi has become a focal point in Naples for numerous migrants drawn by the area’s traditional role as a meeting place and a centre of commercial exchange.

North and West Africans first arrived during the 1980s. Many settled in the area, and some would later open restaurants, shops and wholesale businesses around the piazza.

From the mid-1990s onwards, with a rise in immigration from Central and Eastern Europe, the piazza was a rendezvous for hundreds of mainly Polish and Ukrainian female domestic workers during their free days on Thursdays and Sundays.

Towards the end of the 1990s, the station area became a point of distribution for the Chinese clothing industry located in the towns around Mount Vesuvius and for products imported from the Far East through the port of Naples. This coincided with a sharp rise in Chinese-run shops and warehouses close to the piazza.

Since the early 2000s the area has also seen an influx of Pakistani and Bangladeshi migrants who have acquired stalls in the local markets and opened grocery stores.

Besides functioning as a recreational and economic space, Piazza Garibaldi has provided a link with migrants’ countries of origin. During the 1990s and early 2000s it was a point of departure for coaches bound for Poland and Morocco, while an informal delivery service with Poland and Ukraine was run on Sunday mornings by vans parked in the centre of the piazza. Over the last fifteen years, as different communities have become established, migrants have opened money transfer services and travel agencies in the area.

In addition, the station area is significant for religious purposes. For example, Naples’ seven small mosques are all located in converted spaces in apartment blocks around Piazza Garibaldi. Due to the lack of a suitably sized venue, since 2015 the local Muslim community has used the pedestrianized part of the piazza to celebrate the festival of Eid.

The piazza represents also a political space for migrants. Traditionally the starting place for demonstrations in Naples, over the last twenty years migrants have adopted it as an occasional place of protest, for instance against restrictive changes to migration policy.

These are a few examples of the ways in which migrants have used and created public space in and around Piazza Garibaldi. This evolution, however, has not always been a smooth process.

Train station areas across the world, in fact, have always been ambivalent places. On the one hand they serve as crucial transportation and communication nodes while, on the other, they are often considered chaotic and down-at-heel.

Piazza Garibaldi is in no way different. Many Neapolitans have long associated the square with petty swindlers and other crooked figures. But until the early 1990s it was rarely newsworthy because the city had far more pressing concerns such as unemployment and organised crime.

Matters changed with the arrival of migrants and the simultaneous attempts by the city council to regenerate the station area. Piazza Garibaldi and its new users came to be seen as a major problem. Frequent media reports about delinquency in the piazza were accompanied by calls for improvements and police crackdowns. A dominant argument was that migrants were largely to blame for the area’s disorder and illicit activities.

Public interest in the piazza has fluctuated over subsequent years. The completion of a new metro stop under the piazza in 2012 led to the construction of a sunken shopping centre with upmarket chain stores that enables people using the railway station to avoid the street level altogether. Meanwhile, migrant and Neapolitan vendors have recently joined ranks to campaign against the closure of a street market set up in 1999 next to the piazza and now considered incompatible with the piazza’s new look.

One thing has remained constant: migrants themselves have had little influence on public definitions of Piazza Garibaldi, even if many met during research voiced their disapproval at its shabby state and the levels of crime in the area. Piazza Garibaldi thus consists of two ‘public spaces’: the physical site, but also the sphere of public debate where migrants have been largely excluded.