This content is taken from the Manchester Metropolitan University's online course, Preparing for Teaching. Join the course to learn more.
View course
2.4 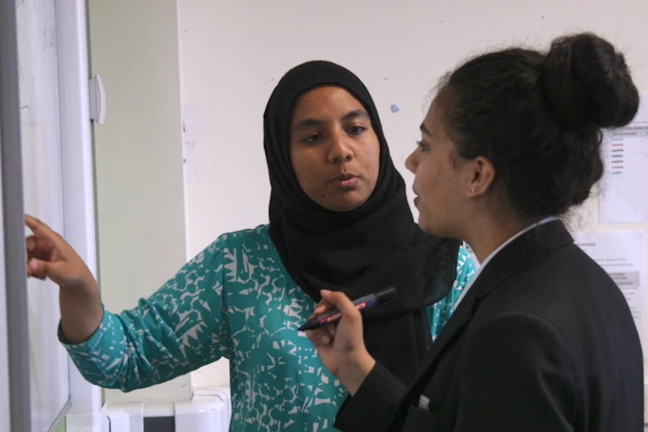 Teacher and pupil at the front of the classroom

The use of labels and terminology in observing lessons

So far we have talked about lessons from the point of view of the teacher but it is also important to think about the pupils. In this article Ellie Overland explores some of the differences in pupils, appropriate language to use when talking about pupils in school and what inclusion is.

When beginning teachers visit classrooms and start to compare what they have seen, one of the most stark differences they notice are in the pupils rather than the teachers. Differences start with the most evident including age and gender. There are also other differences that can be identified from observation such as pupils of different ethnic groups or those who may speak other languages. Beyond that there are still differences you may not notice just by looking and listening to a classroom, these include ability levels, Special Educational Needs or Disabilities (SEND) and socioeconomic backgrounds. All of these can contribute to how a child might experience school and how teachers may need to adapt their practice to meet the needs of the pupils.

When you apply to teacher training you may already have an idea about which pupils you most want to work with. Next week you will have opportunity to discuss different types of schools and specialist settings but the majority of schools have a huge range of types of pupils and need to provide an education that meets the needs of all of them. This is what is commonly described by the term ‘inclusion’.

The term inclusion originally referred to meeting the needs of SEND pupils but in many definitions has now been extended to include a wider range of learners. It is important to have an awareness of this term and your understanding of it when you apply to teacher training. It is also useful to have an awareness of inclusion when you are observing classrooms. Are all children able to access the lesson? Do some pupils require additional support? Do they receive it? In some cases teachers may adapt the tasks or provide additional support for different pupils to allow them to access the lesson, this is called differentiation.

Pupils making particularly significant progress for their age group could be described as high attaining and those at the other end of the scale as low attaining. This does not make a judgement about their cognitive ability but their rate of attainment within school. In some schools pupils may be divided into ‘sets’ for some or all of their subjects with teachers targeting particular levels of attainment. In other models schools may deliver all their teaching to mixed ability classes. You may find it useful to think about the possible benefits of each of these approaches, particularly if you are observing lessons in school.

When you are describing types of pupils in your discussions about teaching it is important to be aware of the differences between pupils and using appropriate terminology when talking about them. This shows a much greater awareness of the role of a teacher.

What I wish I'd known

What makes a good teacher?

What is 'outstanding' teaching?

The importance of behaviour management

Behaviour incidents in the classroom

What about subject knowledge?

Take your first steps towards teaching with this practical course exploring the basics of what it means to become a teacher.

Teacher Training: Choosing the Right PGCE for You

Find the right path into teaching for you and get the chance to build the confidence and skills you need for working in teaching.