This week you are going to use guizero to build a game. The program you will write is complex and so the project will be broken down into several stages using a process called decomposition.

The game you are going to build is a picture-matching game. The object of the game is to spot the emoji that appears in both sets.

The game incorporates many of the elements that you have seen over the past two weeks, including widgets, layout design, commands, and events.

Because this task is complex and involves multiple components, we are going to break it down into stages.

In computer science, the process of breaking down a task into simpler stages that can be reassembled into the completed program is called decomposition.

It is a fundamental skill in programming and computer science. Decomposition requires a programmer to be able to logically break down a task into individual stages. It might be easier to complete each individual stage in isolation, or to build on previous stages and even reuse code from other parts of the project. In either instance, every stage built must be compatible with all of the others. 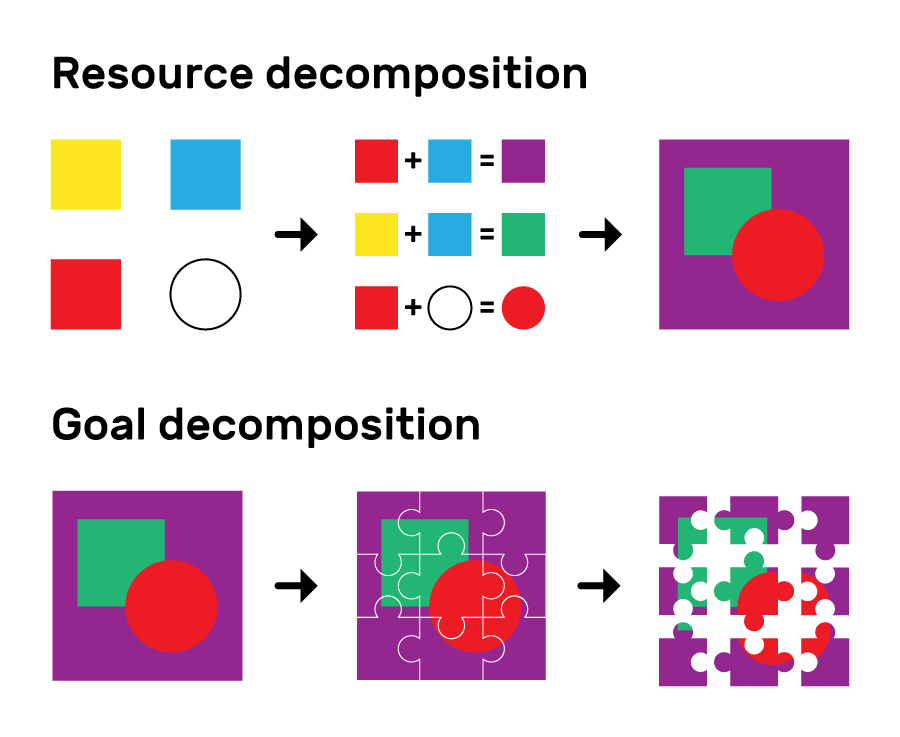 There might be multiple ways of completing a stage. In these instances, the programmer must make a decision on which method is best. They could try to determine which method is the most efficient or be limited based on the resources available or their own skills. Some stages might themselves be complex and so the programmer will want to decompose these as well.

To illustrate this process, think back to last week’s task of building a text editor. Our objective was to make a text editor that could open and save files; our resources were the guizero library. This task can be decomposed into the following stages:

Some stages, like creating a save button, are a bit more complicated than others so we might want to decompose them further:

It can take practice to learn how to use decomposition efficiently but, if done well, decomposition can make big programming projects easier and make your code easier to edit and adapt.

Before applying decomposition to the Emoji Game, which you will do in the next step, practice the process on the following tasks:

For each of the above, break the task down into the stages you need to complete in order to finish the task. Think about what you will need to assemble before starting the task: are you reliant on any external factors or resources? Do the stages need to be completed in a particular order? Are there any stages that can be easily replaced with a different method or approach?

Share your decompositions in the comments, and read other learners’ answers. Did any other learners include stages that you didn’t? How does your approach differ from others’? Reflecting on your answers like this can help with your learning.