This content is taken from the Partnership for Advanced Computing in Europe (PRACE)'s online course, Python in High Performance Computing. Join the course to learn more.
View course
4.2

Before beginning to program for parallel computers, we need to start with few basic concepts.

The underlying idea in parallel computing is that the computational problem can be split into smaller subtasks. Multiple subtasks can then be executed simultaneously by multiple processing units. In modern CPUs, the single execution unit is typically a CPU core.

How the splitting into subtasks is done depends fully on the problem. There are various paradigms and programming approaches into the parallelization, but in this course we focus on message passing approach using Python.

In embarrassingly parallel cases there is very little (or no) interaction between subtasks. Programming these types of problems is typically easier, and there are no high demands for the connection between CPUs. In best cases computers all over internet can be used for computing in parallel such as in the Folding@home project where protein folding is studied using personal computers all over world.

One common way to expose parallelism is by distributing the data, for example an array, to individual processing units. 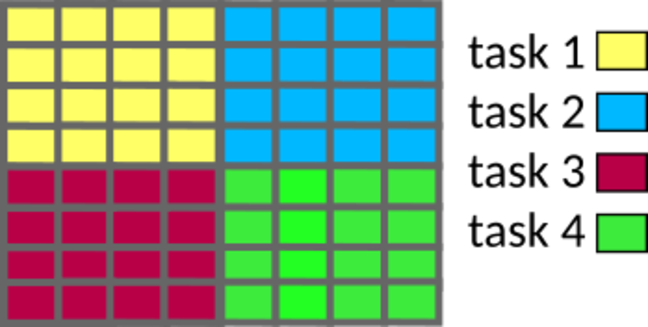 Each processing unit (e.g. CPU core) holds part of the data, and performs typically identical or at least very similar operations on the data. Processing units may need to interact with each other, for example exchange information about the data on the domain boundaries.

Other common parallelization model is the task farm (or master / worker) approach, where a master sends tasks to workers and receives then results from them.

The tasks can be computationally similar, but in some cases they can be also completely different. There are often more tasks than workers, and tasks are then dynamically assigned to workers.

Task farm and data parallel approaches can be also combined, for example, each worker could consist of multiple execution units, and the data related to task is then distributed to them.

When the size of the input data is kept constant, but one increases the number of processing units, we typically speak about strong parallel scaling. The purpose of parallel programming in this case is to decrease the time to solve the problem. The relative parallel speed-up can be defined as

where \(T_p\) is the execution time with \(p\) processing units. 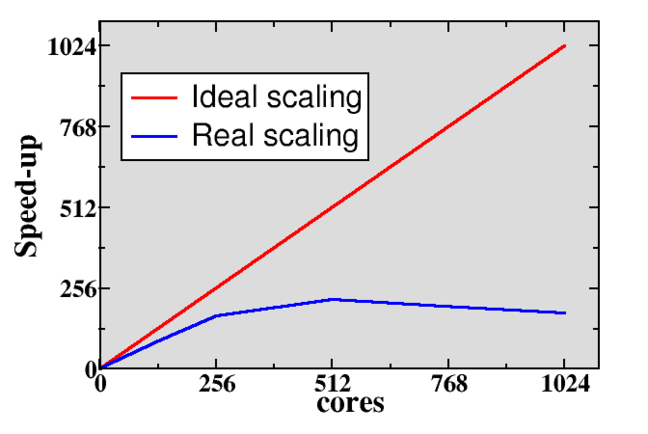 There are several factors which can limit the parallel scaling. Typically, parallel program needs to perform some additional operations which are not present in serial program. There can be some redundant computations, data needs to be communicated, and the processing units need to be synchronized. If there is imbalance in the distribution of the workload, execution time is limited by the slowest execution unit, and others need to wait its completion. There can be also serial parts in the program i.e. parts that cannot be parallelized. If we designate with \(p_f\) the fraction of the problem that can be parallelized, then the maximum possible speed-up (so called Amdahl’s law) is

As an example, if only 90 % of the problem can be parallelized, maximum speed-up is 10 even if one was using 1000 CPU cores.

Parallel programming is not used only for speeding up problems, but also to enable studies of larger or more accurate problems. In these situations, both the size of input data and number of processing units are increased at the same time, and one speaks about weak parallel scaling. In ideal weak scaling case the execution time remains constant when the amount of data and the number of processing units are increased in same proportion. Good weak scaling is easier to achieve than good strong scaling.