The latest research in the field of DNA intelligence focuses on the estimation of an individual’s chronological age from a DNA sample, ie how old they are. While this application might initially seem similar to the estimation of ancestry and phenotype, it is actually very different. This time, we are trying to find an element in DNA that changes with age, and since we know that our DNA sequence stays the same during our lifetime, SNP analysis is no longer applicable.

Chronological age is strongly linked to the expression of different genes. As we age, genes related to characteristics like, for example, skin elasticity, hair pigmentation and energy production, tend to be expressed to a lower degree and in this way we develop wrinkles, grey hair and experience a drop in our energy levels.

A way to detect gene expression directly from the DNA is to analyse DNA methylation. DNA methylation is a chemical modification that almost exclusively affects DNA in positions where cytosines and guanines, two of the four building blocks of DNA, are found next to each other in a specific direction. This modification results in a structural change of cytosines and has been found to often disrupt the expression of genes when occurring in large groups of alternating cytosines and guanines, known as ‘CpG islands’, positioned close to a gene.

In order to detect DNA methylation, a chemical reagent known as ‘sodium bisulphite’ is used to transform all non-methylated cytosines to a different nucleotide. As mentioned before, methylated cytosines are structurally different from the non-methylated ones and, therefore, they are protected from this transformation. In the end, all we have to do is see if the cytosine we are interested in remained a cytosine or was affected by the chemical and we can then tell if it was methylated or not!

Powerful age prediction methods based on methylation have already been developed around the world and can be as accurate as ±3 years, meaning that the predicted age is, on average, only three years different from the actual age. This technology is expected to help with a lot of cases in the future, for example by narrowing down the list of suspects or providing evidence as to whether an individual should be treated legally as an adult or a minor. 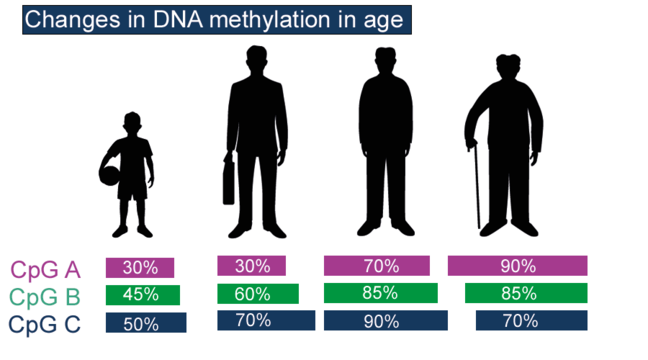 What is the main advantage of this information compared to other intelligence? Could you think of any cases where age prediction might be problematic/inaccurate?