This content is taken from the University of York's online course, Tackling Environmental Challenges for a Sustainable Future. Join the course to learn more.
View course
3.11 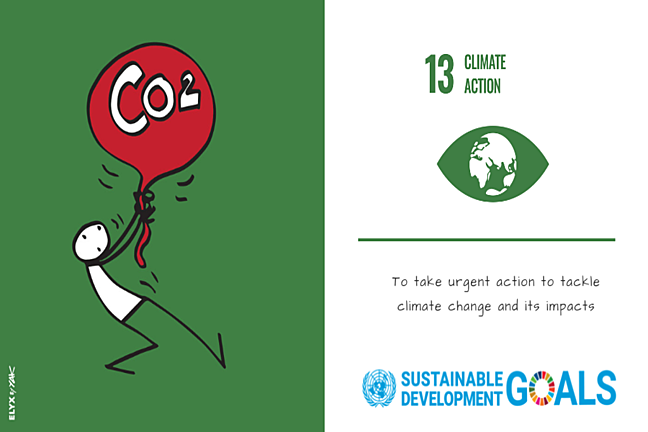 Climate change is happening. We see it all around us, and you have seen examples of it throughout this course. But what can we do about it?

SDG Goal 13: Climate Action is to take urgent action to combat climate change and its impact. There are five targets to help us achieve this, and perhaps the most important target, and the one that is most challenging, is target 13.A: To implement the UN Framework Convention on Climate Change.

This is also known as the Paris Agreement, and was agreed in Paris in 2015. The aim of the agreement is to keep a global temperature rise to well below 2°C above pre-industrial levels and to pursue efforts to limit the temperature increase even further to 1.5°C. To do this needs significant reductions in greenhouse gas emissions, particularly carbon dioxide (CO2).

Even if these targets are met, we will still see increasing numbers of extreme weather events such as hurricanes and cyclones; wildfires, sea level rise, glacier melt, droughts and flood events.

We saw in previous steps how industrialisation burns fossil fuels and releases CO2. This CO2, along with other greenhouse gases such as methane and nitrous oxide forms a blanket around the earth which allows solar radiation through, but then traps this heat under the blanket, causing the earth to warm.

In the graphic below you can see how global emissions of CO2 have increased since the Industrial Revolution.

This has caused the earth to get warmer, as you can see in the next graphic. This also has predictions of what the temperature is likely to do under different emission scenarios.

And finally, to keep to the below 2°C temperature rise, emissions of CO2 will have to fall according to the graphic below. The black line illustrates decreases falling from a peak in 2019, the paler lines are what could have happened if we had started reducing emissions in previous years, and the darker lines are for peaks in years after 2019. This demonstrates how challenging it will be to meet the Paris agreement.

The pledges currently made under the Paris Agreement cover only one third of the reductions in emissions needed to keep temperature rises to below 2°C. These are comprised of Nationally Determined Contributions, reduction targets agreed by countries. These aren’t legally binding, but the countries have a moral obligation to reach them, and the transparency of the targets means international pressure should also be an incentive for action.

The withdrawal of the USA, the second largest emitter of CO2 in the world is a major blow to the Paris Agreement, but hundreds of local governments, businesses and organisations in the USA have signalled that they will continue their efforts to reduce emissions and switch to renewable energy.

What can we do to reduce emissions?

We can actively help to reduce emissions. The most influential thing we can do is maintain pressure on governments to take action, whether this is through writing to your MP or other political representative, attending climate marches where it is safe to do so, and signing petitions calling for action.

We can also reduce our own emissions, through taking public transport, cycling or walking rather than using cars. Sourcing food produced locally and reducing meat consumption will also help. Using eco-friendly products, reducing, reusing and recycling wherever possible makes a difference too.

Reducing emissions is a big challenge, but it is achievable!

Feel free to have a look at more World in Data graphics and run some of the time series of greenhouse gas emissions.

If you would like to listen to an interesting account of Greta Thunberg’s work to drive action to combat climate change there is a podcast you can download and listen to.

It is from a radio show, and is 1 hour 20 minutes long, but divided into chapters so you don’t have to listen to all of it at once!