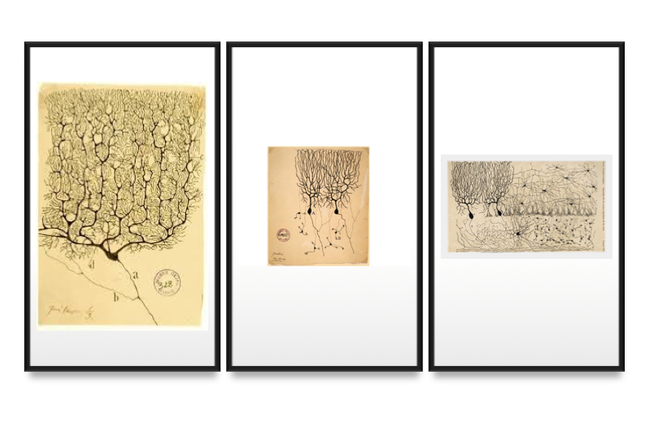 © Not subject to copyright

Biology toolbox: how do we know the structure of the brain?

Structure of the brain

Early scientists and philosophers argued about the seat of human intellect and consciousness. The brain was not considered an important organ by some while others tried to ascribe function to various brain regions without detailed structural knowledge. A detailed anatomical understanding of the brain and the connections within it came in the 19th century with the discovery of neurons as independent structural units of the brain.

The birth of the ‘neuronal doctrine’

Early scientists thought that neurons in the brain formed a continuous network, where information flowed in a shared cytoplasm (reticulum), known as reticular theory. Like many great scientific discoveries, the breakthrough in understanding came from a technological development.

When observing brain tissue by light microscopy, it is incredibly difficult to distinguish cells and synaptic connections. A silver stain developed by Camillo Golgi (who is also famous for identifying the Golgi apparatus) provided a method to stain neuronal processes including axons and dendrites. This stain is taken up by a subpopulation of neurons within a tissue sample and gives neurons a black appearance. To this day it is not understood how the stain is only taken up into certain cells. However, observations of individually stained neurons led to the neuronal doctrine, which postulated that the nervous system is composed of discrete cells.

Golgi was so keen to prove the reticular theory that he was still convinced that his stained neurons were continuous with each other, despite accumulating evidence to the contrary. However, extremely careful observations by a Spanish neuroscientist, Santiago Ramon y Cajal, revealed tiny gaps between Golgi-stained neurons, which were later coined synapses by the British neuroscientist Charles Sherrington. Cajal’s ink drawings of his light microscopy images using Golgi’s stain, such as the neurons of the cerebellum shown here, are works of art and Cajal is considered one of the fathers of modern neuroscience.

Figure 1. Neurons of the cerebellum drawn by Santiago Ramon y Cajal [late 19th to early 20th Century]. The larger neurons are called Purkinje cells after the Czech anatomist who discovered them. Purkinje neurons have characteristic tree-like dendrites. The smaller neurons in the bottom half of the figure are called granule cells due to their small circular cell bodies.

Based on these observations, Cajal made many predictions about the behaviour of neurons and synapses (including theories of learning), which have stood the test of time as modern neuroscience has developed techniques to study them directly. Golgi and Cajal were awarded the Nobel Prize in 1906 in recognition of their work on the structure of the nervous system, but their bitter rivalry was still evident in Golgi’s Nobel Prize acceptance speech in which he continued to argue against the neuronal doctrine!

The brain region that distinguishes humans from other mammals, and is responsible for our intellect, is the cerebral cortex. The cortex occupies the largest area of any brain structure and each cortical hemisphere is broadly divided into four functional lobes (as labelled in the image below): the frontal lobe (shown in blue) controls movement and plans actions; the parietal lobe (yellow) is concerned with somatic sensation; the occipital lobe (red) with vision; and the temporal lobe (green) with hearing and with learning and memory through the buried structures of the amygdala and the hippocampus. 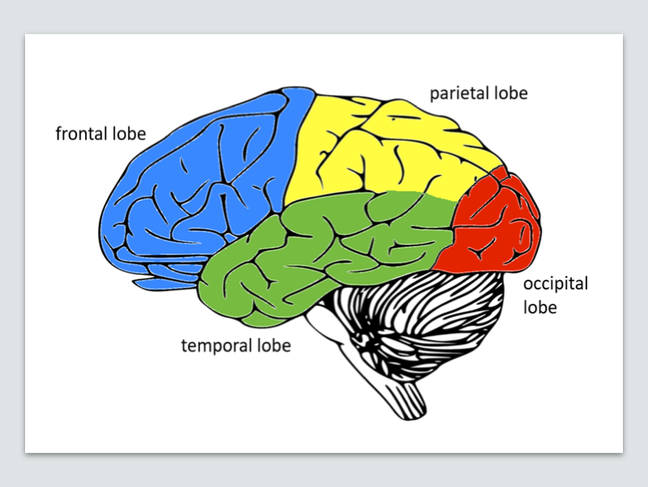 Figure 2. Four lobes of the brain

Well before the visualisation of neurons, Franz Joseph Gall had proposed that particular cortical regions had specific functions. Gall correlated an individual’s personality traits with bumps on their head and this later became known as phrenology. While the idea of localized functions was later accepted this was based on studies of patients with brain damage, and not on the shape and bumps on the skull! The first higher function to be assigned a cortical region was that of language. Through the study of patients with speech afflictions without loss of intellect or paralysis, Paul Broca localised speech to the left frontal cortex and in 1864 made the famous announcement “Nous parlons avec l’hemisphere gauche!” (“We speak with the left hemisphere!”)

The study of patients with brain lesions relies on symptoms and then post-mortem analyses. The development of functional magnetic resonance imaging (fMRI) in the 1990s has allowed us to study the functioning human brain. The brain is metabolically very active and this property allows fMRI to detect elevated neuronal firing by measuring signals that originate in blood flowing to active neurons whilst the subject performs a task. The ability to image the living human brain has helped us appreciate that all cognitive behaviour involves the interaction of many different regions of the brain.

At the bench: How do we image the brain?

Magnetic Resonance Imaging (MRI) has had a huge impact on understanding the human brain. MRI has helped neuroscientists visualise brain regions in healthy and diseased states and can identify which regions of the brain are active during particular motor and cognitive tasks. Scientists at the Department of Psychology, University of York are using MRI to study learning, sleep, vision and language development. In this video, filmed at the York Neuroimaging Centre (YNiC), Professor Alex Wade explains the principles of MRI.