The University of Roehampton team of educators will lead you through your journey among the Tudor dynasty. Please feel free to introduce yourself to them, or follow them on FutureLearn!

Professor Suzannah Lipscomb is Professor of History at the University of Roehampton, and a Fellow of the Royal Historical Society. She received her DPhil from Balliol College, Oxford; writes a column for History Today; and has presented twelve history documentary series. Suzannah is author of five books about the sixteenth century: The Voices of Nîmes: Women, Sex, and Marriage in Reformation Languedoc, 1536: The Year That Changed Henry VIII, Witchcraft: A Ladybird Expert Book, The King is Dead, and A Visitor’s Companion to Tudor England. She was appointed Professor while this MOOC was being created, so at times you’ll find her referred to as Dr Suzannah Lipscomb. On Twitter, her handle is @sixteenthCgirl, which tells you everything you need to know.

Professor Glyn Parry specialises in early modern (1500-1750) environmental history, political/intellectual history, religious history, magic, and the history of scholarship. He attended the University of Cambridge, gaining a PhD in History in 1981. In 1987 he published A Protestant Vision: William Harrison and the Reformation of Elizabethan England with Cambridge University Press. Glyn joined Roehampton in 2012 after several years teaching at Victoria University Wellington, New Zealand. 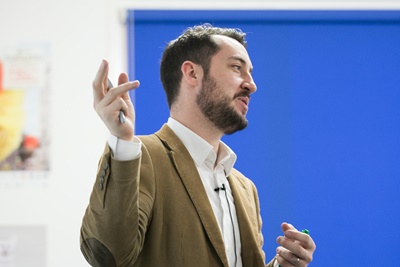 Professor Ted Vallance is Professor of Early Modern British Political Culture at the University of Roehampton, London. His research focuses on “subscriptional genres” (oaths, petitions, and loyal addresses), and on the memory of the English revolution. Ted’s latest book is Loyalty, Memory, and Public Opinion in England, 1658–1727 (MUP, 2019).

Dr Andy Kesson is a Reader in the Department of English and Creative Writing at the University of Roehampton. Andy has written extensively on early modern theatre, performance, and prose fiction including books on John Lyly and print in early modern England. His research interests are vast spanning popular culture and book history, the reception of early modern writers and the literary canon, gender, queer and disability studies, and pedagogical theory and practice.

Gillian McIver received a BA and MA in History from the Universities of British Columbia and Toronto, before moving into film-making and film research. She is interested in how visual images communicate ideas about history. Gillian is the author of “Art History for Filmmakers” (Bloomsbury Press, 2016).

Professor Michael Patrick Cullinane is Professor of U.S. History, and a neophyte to sixteenth century Tudor history. His only real lens through early modern history is Blackadder and so he works entirely behind the scenes with the real experts to put together a top-class online course.