This content is taken from the University of Exeter's online course, Understanding Gender Inequality. Join the course to learn more.
View course
2.3 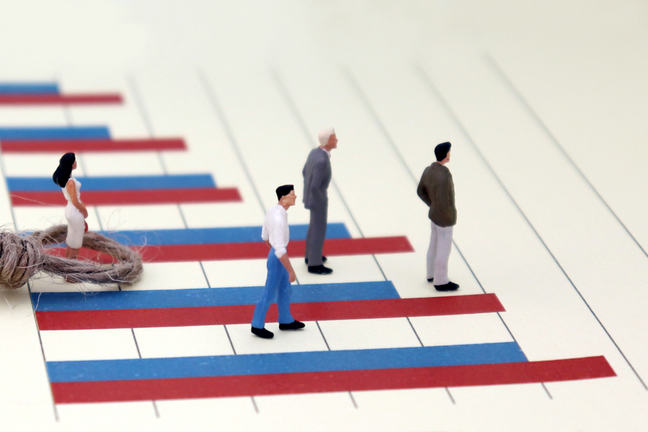 Gendered Roles: some statistics to set the scene

Below are some examples that demonstrate the gendering of roles. Firstly, we explore the extent of labour force participation, which sets the scene in terms of the proportions of men and women in the workplace, from which we might infer a work-home divide with women taking on more household roles (although unemployment will also be a factor). We also look at the gender split between full-time and part-time work. We then look at occupational differences, specifically the gendering of science-based roles as being more masculine (and thus likely to be disproportionately occupied by men), and caring roles more feminine (and thus likely to be disproportionately occupied by women). Consider how the representation of women and men in particular roles might influence people’s perception of them and how accessible certain occupations may feel to a member of the minority sex in that occupation.

Women still undertake the majority of care work (including household chores), but this is now often undertaken alongside paid-work, as labour force participation rates for women have increased to levels much closer to men. However, this is not a consistent picture worldwide, as the following map [1] demonstrates. 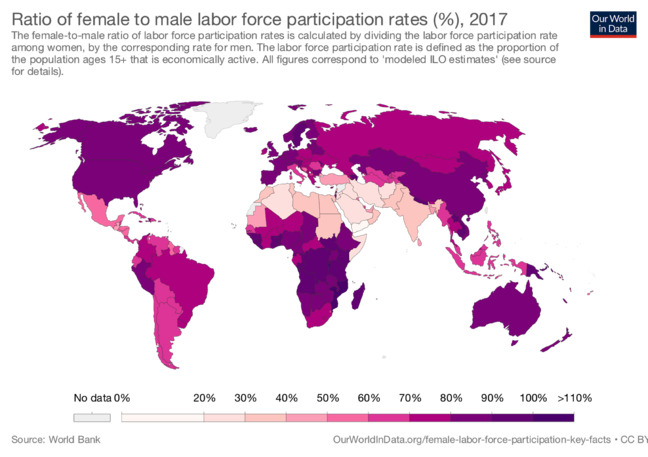 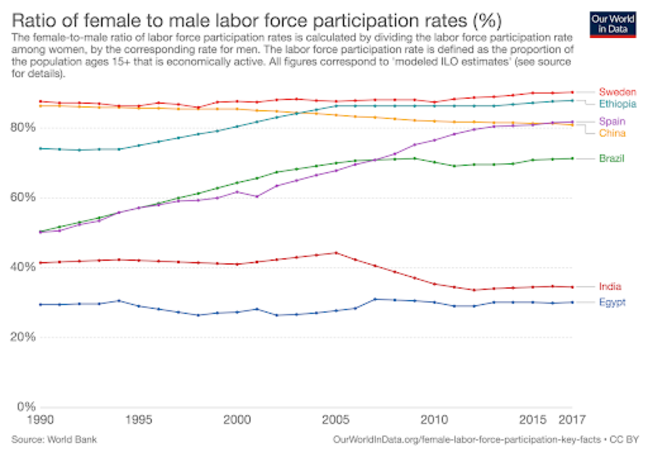 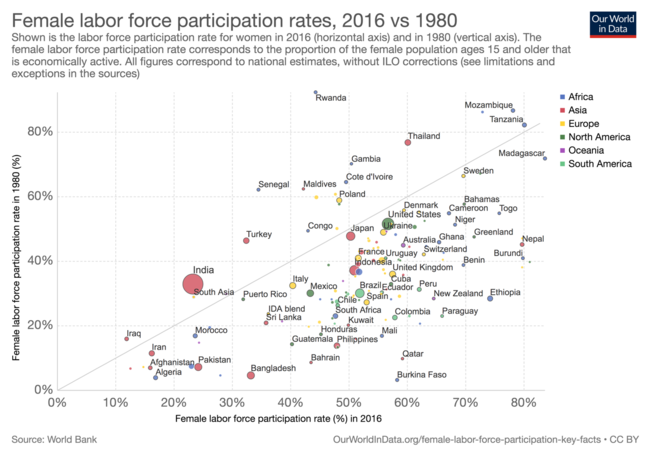 Part of the reason for the lower representation of women in the workforce is that they are disproportionately likely to take on roles that are not measured as economic activities, such as unpaid care work and managing the home. The following graph shows how some countries compare when considering the gender ratio of unpaid work. 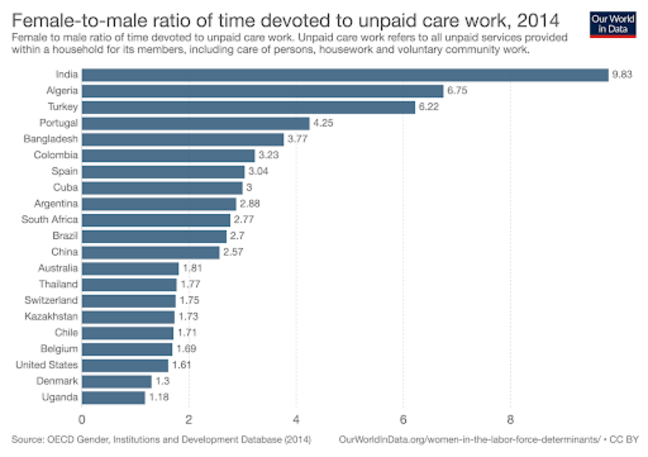 The Office for National Statistics in the UK have calculated that when it comes to unpaid domestic chores at home, women do 60% more than men [2]. But the type of activity also matters, with men more likely to take on transportation, such as driving children to activities, but a lot less likely to do the cooking, childcare and housework. This suggests that even within the home, there is a gendering of the types of unpaid work undertaken.

Women are disproportionately likely to work part-time compared to men. This offers them flexibility to take on caring roles, which they are more likely to undertake than men, but it is also associated with lower rates of pay and less preferential working conditions. The graph below sets out some of the international differences between rates of part-time work between men and women. 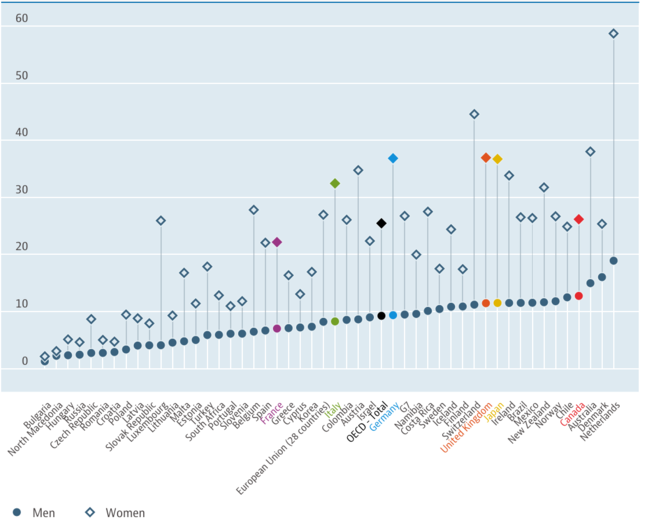 Participation rates in the workforce will be affected by factors such as: the time taken to complete domestic household chores and accessibility of labour-saving domestic devices, flexibility in working hours, contributions made by men in completing chores, maternal health and fertility rates, policies and provision supporting childcare, formal restrictions in place on women working, and cultural attitudes [3] .

Men are far more likely to be employed in science-based subjects than women. According to UNESCO, women scientists comprise less that 30% of the scientists globally. In the US (2011) [4] women comprised 26% of computer and mathematical-based occupations. In the UK (2017) [5] women comprised 23% of science, engineering, technology and mathematics-based occupations (excluding health). Eurostat suggests a more positive picture for women in science in Europe. Overall, however, men are disproportionately represented in science-based fields.

Women are far more likely to be based in caring roles. Some national-level statistics are given below.

In some countries women are not always allowed to undertake the same roles as men, or some restrictions apply, as the map below demonstrates [10]: 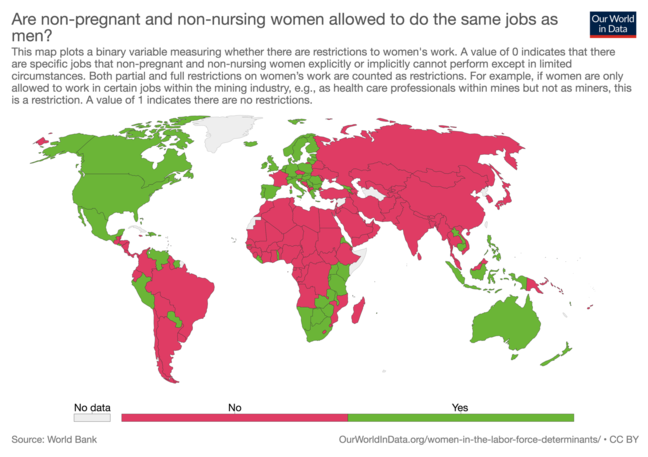 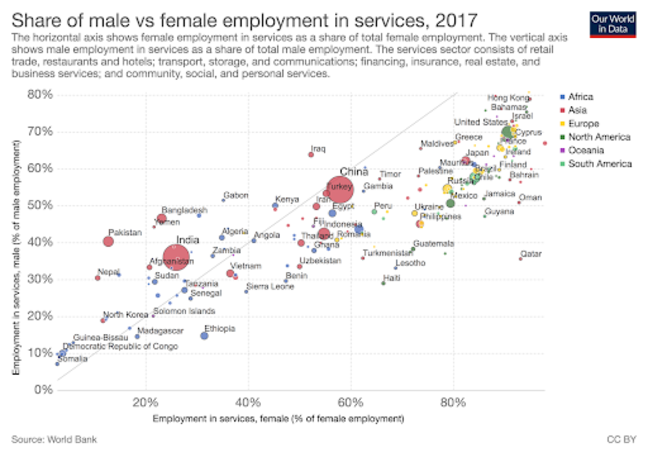 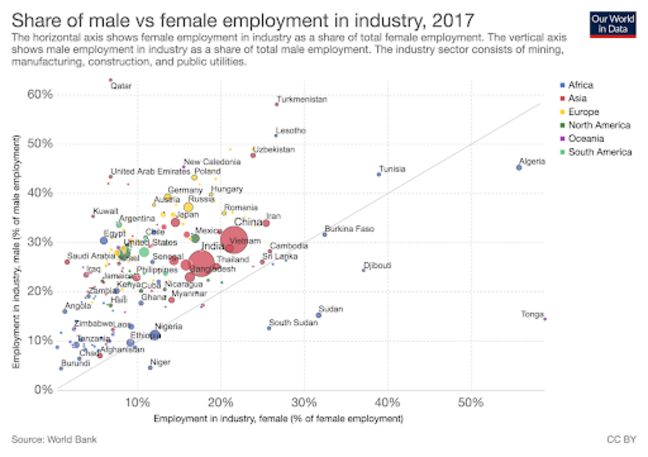 These figures reflect the tendency for occupational segregation, as men and women are more likely to be found in particular types of work or industry. The gendering of types of work, particularly where roles are almost exclusively male or female, can be linked with the value placed on types of work – a theme we will return to when we look at the gender pay gap.

The Office for National Statistics published an article claiming Women shoulder the responsibility of ‘unpaid work’.

This UNESCO paper, Women in Science, presents data on the gender gap in science.

The Executive Summary of Science, Technology and Gender: An International Report, from UNESCO, presents data relating to gender disparity in science and technology.

Elsevier’s Gender in the Global Research Landscape presents an anlysis of research performance through a gender lens across 20 years, 12 geographies, and 27 subject areas.