Discover how your language choices can deeply affect the children and young people you care for, in this guest post by Dr Christine Hadfield at the University of Glasgow. 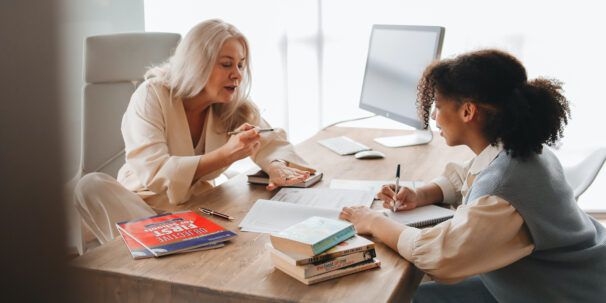 Do you work with children or young people? If so, part of your role probably involves looking after their mental health and wellbeing – a crucial aspect of every child’s development and overall happiness. But, are you aware of how important it is to use the right language when dealing with children who have faced trauma?

In this guest post, Dr Christine Hadfield from the School of Education at the University of Glasgow discusses the importance of using compassionate language in trauma-informed care, focusing on children and young people.

It is more important than ever for those working in education, social care, and residential care to be able to support the mental wellbeing of young people. If you want to build your skills and knowledge in this area, you can join the University of Glasgow’s Supporting Young People’s Mental Wellbeing microcredential.

How we talk about ‘bad behaviour’ in children

According to the philosopher, Ludwig Wittgenstein, “The limits of my language are the limits of my world”. The language we use affects the lenses through which we view the world.  How we view the world, and those in it, affects how we behave towards others. Never is this more true than when we consider the mental wellbeing of our children and young people.

Synonyms are words that have the same meaning as each other. Let us explore some of the most commonly used synonyms in conversations about children and young people. We frequently hear about ‘bad behaviour’, whether it’s in the classroom or at home, and of course, it’s not difficult to see the blatant negativity in this choice of vocabulary.

So, we perhaps change it to ‘challenging’, in a belief that we’re removing some of the disapproving tone. But are we? First of all, it’s often the child we are calling ‘challenging’, as opposed to the behaviour, but we have to ask ourselves what is being ‘challenged’.

Is it our overzealous need for control? Is it our sometimes unrealistic expectations? Either way, there is no place for empathy, compassion or even support when we use this vocabulary.

Now let us consider the word ‘distressed’ as an alternative. The thesaurus offers ‘distraught’, ‘worried’, and ‘anguished’, among others, as synonyms for this. Immediately, our attention shifts and our stance becomes one of empathic curiosity.

When we begin to ask what is behind the particular behaviour that has ‘challenged’ us, we may begin to wonder how we can help that child. This is exactly what one Scottish Headteacher has done in her primary school and she is now asked to speak about her approach across the country. We’ve started to realise that often the child just ‘can’t’ instead of ‘won’t’, therefore we try to support them with their needs.

Is aggression merely an expression of fear?

Antonyms offer us another lexical means through which to discuss the lenses we wear when viewing our children and young people. Could the opposite of aggression be fear? When faced with aggression, we often seek to punish such an intrusion into our space and our sense of calmness. It’s socially unacceptable and can be dangerous after all.

But if we view aggression instead as an expression of fear, our reaction to the perpetrator may be different. We may seek to understand rather than condemn, to rehabilitate rather than castigate.

Of course, that doesn’t mean we are accepting of aggression or making excuses as some would claim. Rather we are trying to find an approach where we can truly help and support each other. Compassion may then take prominence over its antonym – blame.

The root of attention-seeking behaviour in children

Not many of us will be familiar with ‘contronyms’ – words which may have two opposing meanings. For example, ‘dust’ can mean fine particles of material but can also mean to remove such fine particles; ‘bolt’ can be something that fixes one item to another, but also a way to quickly remove ourselves from a situation.

Another less obvious one could be ‘attention-seeking’. Whether the term is a contronym or not could be up for debate, but let’s explore it further. We use this term pejoratively to describe a person’s behaviour. We generally use it to criticise and dismiss.

What if ‘attention-seeking’ also means that a person is ‘attachment-seeking’ – that is to say that they’re looking for connection, for closeness, to affirm that they are loved? In the case of children and young people, perhaps this is the only way they can communicate this desperate need. Again, this is an example of how looking through different lenses (and using different vocabulary) can change our responses to behaviour.

A final potential contronym is a simple one: the word ‘no’. While the adult saying ‘no’ may be doing so out of genuine protective paternal duty (eg. “no, you can’t eat yet another bag of sweets”), the struggling child may translate it as ‘I’m not loved’ or ‘I’m not liked’. Clearly, this is quite the opposite of the intended meaning.

How attachment issues can affect self-perception

Care-experienced children, who may have attachment issues, often believe that they are made of ‘bad stuff’ and therefore, their perceptions of others’ words and actions can be tainted by this self-image. It’s important to recognise the potential power of our words so that we may cushion our good intentions more sensitively.

Knowledge of attachment theory, as well as awareness of the impact of early adversity and how trauma can affect the developing brain, can help us with this different way of acting, looking and being.

We begin to wonder what happened to the child rather than what’s wrong with them. For example, we begin to help them recognise and express their emotions and we look to understand and ease their pain of loss and bereavement. These are just some of the themes discussed in the University of Glasgow’s new microcredential, Supporting Young People’s Mental Wellbeing.

Supporting our children and young people

To conclude, when it comes to describing children’s behaviour, language is very important. It can be limiting, but it can also be liberating and transformational. Scotland’s recent Independent Care Review is a prime example of this, given that its published reports are called ‘The Promise’.

In the reports, they articulate a vision and a promise to Scotland’s care-experienced young people that they grow up ‘loved, safe and respected’. Their mission is to ‘Keep the Promise’ by 2030. What a clever use of language at the heart of Scotland’s policy-making and planning!

This is a promise that, undoubtedly, we would like to be made to all our children. Now, it falls on each and every one of us, not only to make promises but to fulfil them and truly support our children and young people.