Update: this event has now taken place. Read the highlights.

Each #FutureLearnAsks event is a chance for you to discuss and debate a big topic with leading experts and other learners, outside of the confines of a FutureLearn course. The first two were about Cyber Security and Community Journalism.

Join the next #FutureLearnAsks on 8 May

For our next Twitter chat, we’re going to try something a bit different. On the eve of Russia’s 2015 Victory Day Parade, we will be joined by Lips and Teeth Lead Educator John Delury for a topical discussion about the upcoming event and the political implications of Kim Jong-un’s decision not to attend, including what would have been his first handshake with Chinese leader Xi Jinping.

The discussion will reflect current information on the day, but you can expect to discuss topics like the significance of Kim Jong-un’s decision not to attend in terms of North Korea’s future and Kim as a leader, what this says about the role of Korea’s two great power neighbours, Russia and China, and where South Korea fits into this complex picture, as well as the wider questions around what remembering the Second World War means in East Asia. 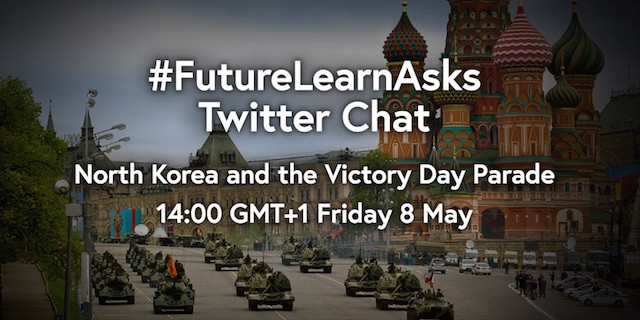 John Delury
@JohnDelury
John is Professor of Chinese history and Sino-Korean relations at Yonsei University, Lead Educator on Lips and Teeth: Korea and China in Modern Times and co-author of Wealth and Power.

Adam Cathcart
@adamcathcart
Adam is Lecturer in Chinese History at The University of Leeds, and editor of SinoNK, a scholarly collective dedicated to documenting and analysing the dynamics of Northeast Asia.

Jean H. Lee
@newsjean
Jean is a veteran foreign correspondent and expert on North Korea. Now a Public Policy Fellow at The Wilson Centre, she previously opened the AP bureau in Pyongyang.

For an hour starting at 14:00 GMT+1, FutureLearn will tweet questions from @futurelearn. You can then respond to these questions by including #FutureLearnAsks in your tweets.

Each question will be numbered Q1, Q2, etc, so when you respond, you should include the number in your answer. E.g.

A2 This my answer to question 2. #FutureLearnAsks

You’re also encouraged to reply to other people’s tweets, and the guest contributors will be joining in too.

FutureLearn will retweet some of the most interesting contributions, and generally help to facilitate the conversation. We’ll create an archive of the discussion and share it after the event.

What to do now

Remember to put the time and date in your diary! And if you’re planning to take part, you could use the hashtag #FutureLearnAsks to introduce yourself right now.