Deirdre O’Sullivan is lead educator on the University of Leicester’s free online course, “England in the Time of King Richard III.” Here, she talks about the updated course, which starts on 16 February, and the exciting events planned for the final week, to coincide with Richard III’s reburial. 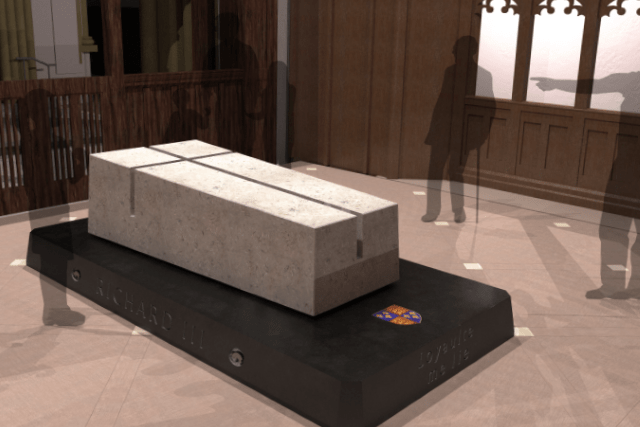 Since the discovery of King Richard III’s skeleton in a Leicester car park, there has been worldwide interest in his story.

In December 2014, DNA evidence was released, confirming his lineage and revealing that it was likely he had blond hair and blue eyes. Plans are now underway for his reinterment (or reburial) at Leicester Cathedral on Thursday 26 March, following a week of events in the city to mark the occasion.

To follow these new developments in Richard III’s story, we have updated our free online course to reflect the latest research and will be covering his last journey to his final resting place – a new tomb in Leicester Cathedral, pictured above.

Get a unique perspective on Richard III’s reburial

I’m very excited to have been invited to attend the burial service, which will give me the opportunity to bring you a unique perspective on the ceremony and events around it as they happen.

I’ve also managed to get exclusive interviews with the Dean of Leicester Cathedral, who will be leading the events. David Monteith has taken time out of his busy schedule to tell us about the cathedral’s involvement in the reburial, including plans for the week and the thinking behind the design of the tomb.

King Richard III’s remains will leave the University of Leicester on Sunday 22 March and the cortège will travel around the county, stopping at places of significance, including Bosworth Battlefield, before returning to the city. He will then lie in repose for three days before the reinterment ceremony.

We’ll be providing updates live throughout the week, and encourage you to take part with your thoughts and comments.

You can find out more about this course in Deidre’s previous post for the FutureLearn blog or join it now. You can also follow updates @FLRichardIII and using #FLrichardIII.