What happens when a religious community can no longer physically meet to worship? Hear from University of Edinburgh academic, Dr Yahya Barry, on how Islamic law has responded to social isolation in Edinburgh, Scotland. 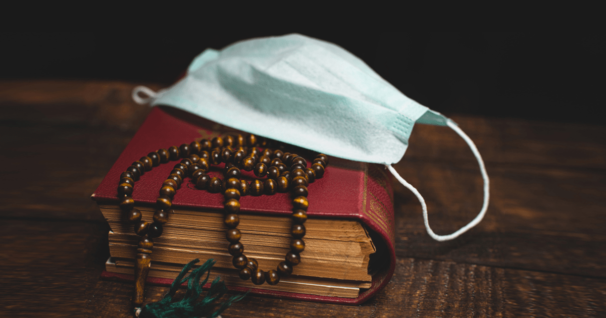 In this guest post, hear from teaching assistant and research fellow, Dr Yahya Barry – an educator on the University of Edinburgh’s new course on The Sharia and Islamic Law – about how Islamic law has responded to state-enforced social isolation measures in Edinburgh, Scotland.

You can find out more about the distinctions and definitions of Sharia law on the University of Edinburgh’s free online course.

The religion of Islam has existed for over 14 centuries, but little is known about the way its code of legislation (the Sharia) actually operates. Its almost two billion followers invariably cherry-pick and “mix and match”, creating a bricolage of Islams across the world.

Sharia is an Arabian word that means ‘path’, and the Sharia law is a code that shapes Muslim life. The law is upheld by Imams who are ministers of religion trained to represent Islam, as well as oversee Muslim congregational worship.

How Muslims have responded to the UK lockdown – placed by the government in response to the coronavirus pandemic – has shined a light on the contextual, debated, and constantly evolving nature of Islamic law.

What happens to this community of believers, along with their faith, when they can no longer physically meet to worship together in prayer, fasting, celebration and mourning?

On 16 March 2020, the Scottish government urged Imans to “suspend congregational prayers within the Mosque – including the Friday prayer”. The Cabinet Secretary for Justice, Humza Yousaf – a Muslim himself – along with the Chief Medical Officer urged us to cancel all prayer in congregation.

As religious leaders, the Imams have the authority to advise their communities on when to start and finish their prayers, and when they should begin and end their fast. Some celebrants are even able to officiate marriages in their mosques under both Islamic and Scots law.

Imams now have to delicately juggle multiple contingencies: the immediate risk to health, the demographic reality of a dispersed and diverse minority community, and the fact that their authority has to operate within the confines of secular Scots law.

For the city of Edinburgh, a WhatsApp group for all Imams – of which I am a part – is discussing what to do.

The discussion starts with a number of key points of debate. Some question the linguistic and perhaps technical connotations of the word “urge” alongside its legal significance in the letter:

“‘Urge’, that’s surely not an obligation or a command?”

Another highlights that the term is qualified with the adverb “strongly”. Another dissects the meaning behind the urge, explaining that the protection of the NHS here is a point of conjecture, not one of certainty.

Could prayers be cancelled on the grounds of statistical predictions?

A reminder is then served: in Islamic law, “certainty” (Yaqeen) can only be removed by certainty, not conjecture.

Distinctions were starting to emerge now between the classically trained Imams from the seminaries and the more eclectically qualified – those who are self-taught – members of the group.

Another interjects at this point, reminding the group of the certainty embodied in the sanctity of the mosques – they are symbolic of the community’s identity and wellbeing. Another retorts:

“But this is a matter of life and death”

They reference the fact that the removal of harm (Mafsadah) supersedes the good or virtue (Maslahah) of communal practice – a legal maxim rooted in Sharia which emerges as authoritative during the discussion.

This, along with information cited from Muslim advisory groups, rulings from certain global authorities and consultations by Qadis (Islamic judges) from across the Muslim world, seals the outcome.

A decision is reached

Within three hours, all fourteen mosques in Edinburgh represented by the group announce the cessation of communal worship, except one – there’s always one. But even this mosque later reconsiders its position and adopts the same stance as the majority.

This informal WhatsApp group of Imams, now representing a population of 15,000 Muslims across the city of Edinburgh, deliberated over matters as though they were a legal council, sitting in order to pass important juristic matters of policy. And, in many ways, they were.

Within an hour or two of our WhatsApp deliberations, Facebook posts, emails and tweets appeared communicating the cessation of congregational worship.

The Friday congregational prayers were to be replaced by the normal afternoon prayer as there was no precedent to instruct that the same format be undertaken at home during times of social isolation.

These are some of the questions that our free, online course The Sharia and Islamic Law: An Introduction interrogates.

Created and led by leading academics from the University of Edinburgh specialising in Islamic and Middle Eastern studies, anthropology, politics, religious studies, sociology, and theology, this course brings together multiple perspectives to guide the enquiring mind on this often misunderstood subject.